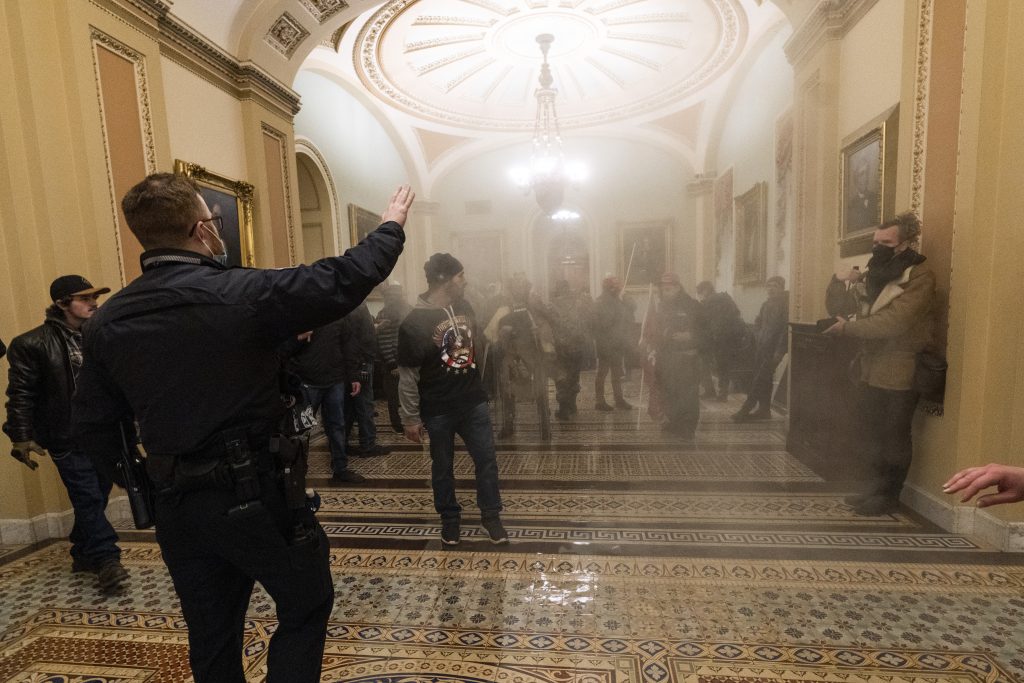 U.S. Capitol Police were denied pre-authorization for National Guard support two days before the Jan. 6 riot that overwhelmed their defenses and threatened lawmakers, according to written testimony in a House briefing on security failures in the deadly protest.

The 1,200-person Capitol Police force was overwhelmed by a mob of then-President Donald Trump’s supporters that outnumbered law-enforcement officials who were diverted to other emergencies, under-prepared and not sufficiently armed to repel the attack, acting Capitol security leaders said in their testimony.

They said the then-police chief’s Jan. 4 request for help from other agencies was rejected by a panel including House and Senate sergeants-at-arms and other Capitol officials. Acting Capitol Police Chief Yogananda Pittman, who took over after the attack, said this was one of many failures of the day and said she offered her “sincerest apologies on behalf of the Department.”

“On January 6th, in the face of a terrorist attack by tens of thousands of insurrectionists determined to stop the certification of Electoral College votes, the Department failed to meet its own high standards as well as yours,” Pittman said in a closed briefing before the Appropriations Committee.

The riot resulted in the deaths of five people, including one U.S. Capitol Police officer who was injured in the attack. Another officer later died by suicide.

The security failures have raised fundamental questions about how to keep lawmakers and staff safe while allowing access for press and members of the public. Acting House Sergeant-at-Arms Timothy Blodgett said the U.S. Capitol and its grounds may never be the same.

“One of the initial examinations must be in how communications work on the Hill, and how we mush adopt and evolve our structures, and our procedures,” he said. “We must harden this campus.”

Then-Capitol Police Chief Steven Sund, who stepped down after the attack, had asked the Capitol Police Board on Jan. 4 “to declare a state of emergency and authorize a request to secure National Guard support,” but the board denied the request, Pittman said.

Tuesday’s written testimony covered intelligence failures before the attack — even though protests were scheduled and online discussions suggested violence — as well as the inadequate response as the attack unfolded.

“It is clear there was a failure of preparation,” Blodgett said, blaming insufficient or conflicting intelligence and the delay in getting assistance from other agencies.

According to Pittman, the 1,200 Capitol Police officers present that day were “no match for the tens of thousands of insurrectionists (many armed) attacking the Capitol and refusing to comply with lawful orders.”

She said the department’s resources were diverted to other emergencies at nearly the exact time the mob arrived at the Capitol, including a pipe bomb at the nearby Republican National Committee headquarters. Police were also responding to a vehicle with explosive chemicals and a firearm in plain view parked on the same block. An identical pipe bomb was discovered several minutes later at the Democratic National Committee headquarters, Pittman said.

Pittman acknowledged that Capitol Police did not do enough to prepare, when they “knew that militia groups and white supremacists organizations would be attending,” and promised to be on a different scale than previous 2020 protests.

However, she said there were no preparations compatible with “an open campus” for lawful protests that would have also prevented the attack that day.

Despite the failures, Blodgett said “every Member and House staff went home without death or serious injury.” He said “our evacuation procedures worked well” to move lawmakers to a secure location.