Regional Supplies Thin, But New York Not Out of Vaccine
CoronavirusRegional 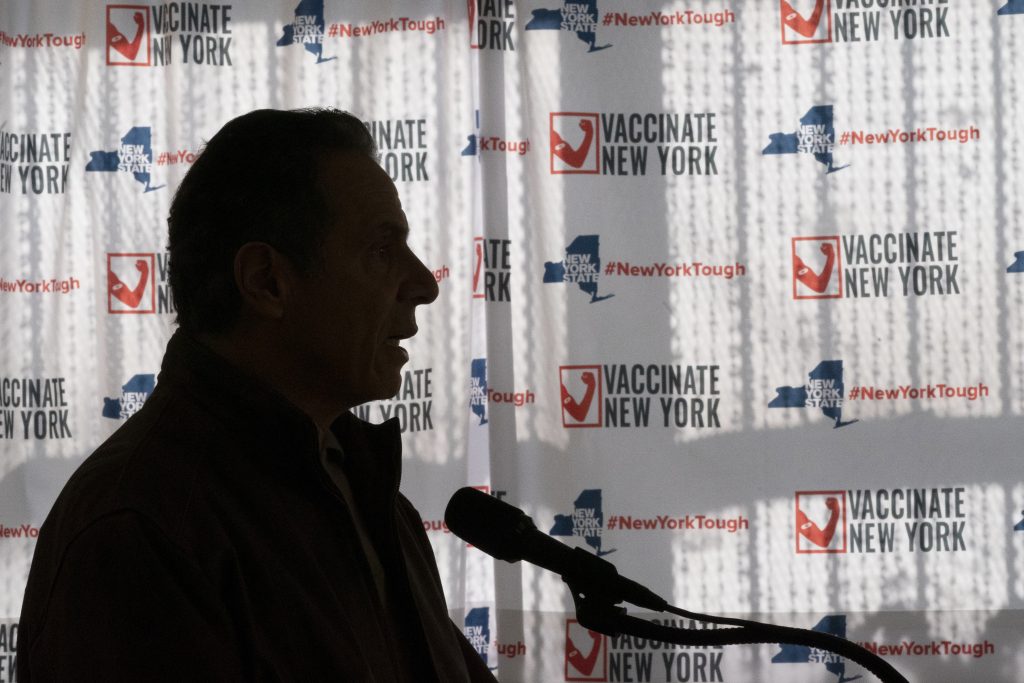 Gov. Andrew Cuomo warned this week that New York was about to “exhaust” its coronavirus vaccine supply, with only a few thousand doses left. But is it really running on empty?

Not entirely. Here’s how the math breaks down:

The Democrat said Friday that after administering vaccines to more than one million people, the state had only around 28,000 doses left over for people getting their first of two shots.

But that was a reference to how much vaccine was available out of the stockpile of first doses the state had at the start of the week.

The U.S. Centers for Disease Control and Prevention has been publicizing a different count for New York, saying as of Saturday that of the 2.4 million doses delivered to the state, about 1.2 million were still unused.

State-run vaccination sites have not canceled appointments, and Cuomo said he’s confident those sites will have enough vaccines to provide second doses to all who have already been vaccinated.

Many pharmacies, hospitals and other vaccine providers were still planning to hold vaccinations as scheduled in coming days.

WHY DID CUOMO SAY NEW YORK HAD EXHAUSTED IT SUPPLY?

The governor was trying to stress that New York was getting caught up with past deliveries of past vaccine shipments, after an initial period in which the shots had been piling up unused.

Touring a vaccine site in New York City on Saturday, Cuomo said the shots delivered in the first five weeks of the vaccination effort had been used, but that the “Week 6” shots had been rolling in.

“They’re sent by Washington. They’re delivered by Washington to individual locations, Washington literally uses in some cases FedEx, believe it or not, delivery services — but we’re now starting to get some of the Week 6 allocation, and that’s what we’re using today. So, we’ll be going week to week.”

DOES THAT MEAN THERE ISN’T A PROBLEM?

No. There is definitely far less vaccine than needed to meet demand.

Some city and county clinics in recent days delayed or temporarily closed vaccination programs when they got fewer shots than they expected.

In central New York, Oneida County Executive Anthony J. Picente Jr., a Republican, said Friday he was frustrated that he was forced to temporarily shutter two county-run vaccination sites even as a nearby state-run site at SUNY Polytechnic Institute stayed open.

“They have thousands of vaccines up at SUNY. They couldn’t give us 200 a day to take care of the seniors in this community?” Picente said at a news conference in front of a “closed” sign at a county site. “It’s outrageous, it’s an embarrassment and clearly it’s not the way that this pandemic should be managed.”

The Cuomo administration has said county health department sites are supposed to prioritize essential workers, with older adults directed to pharmacies and other sites.

Spokesperson Jack Sterne said Friday that “the only way we can distribute vaccines equitably given the lackluster federal supply is by following these simple rules” and that Picente “should know better.”

WHAT’S GOING TO HAPPEN NEXT WEEK?

It is likely to take more time for many vaccination sites to work out the disconnect between the number of appointments and the number of shots available.

He urged vaccine providers to “only schedule appointments for allocations they know they will receive.”

“The last thing we want to do is cancel appointments,” Cuomo said.

Cuomo said New York has been administering an average of 80,000 doses a day — again, not counting vaccines given out in nursing homes. At that rate, it would take months to vaccinate the more than seven million people in the state currently eligible to get the shots.

The big unanswered question is whether the pharmaceutical manufacturers will be able to ramp up production.