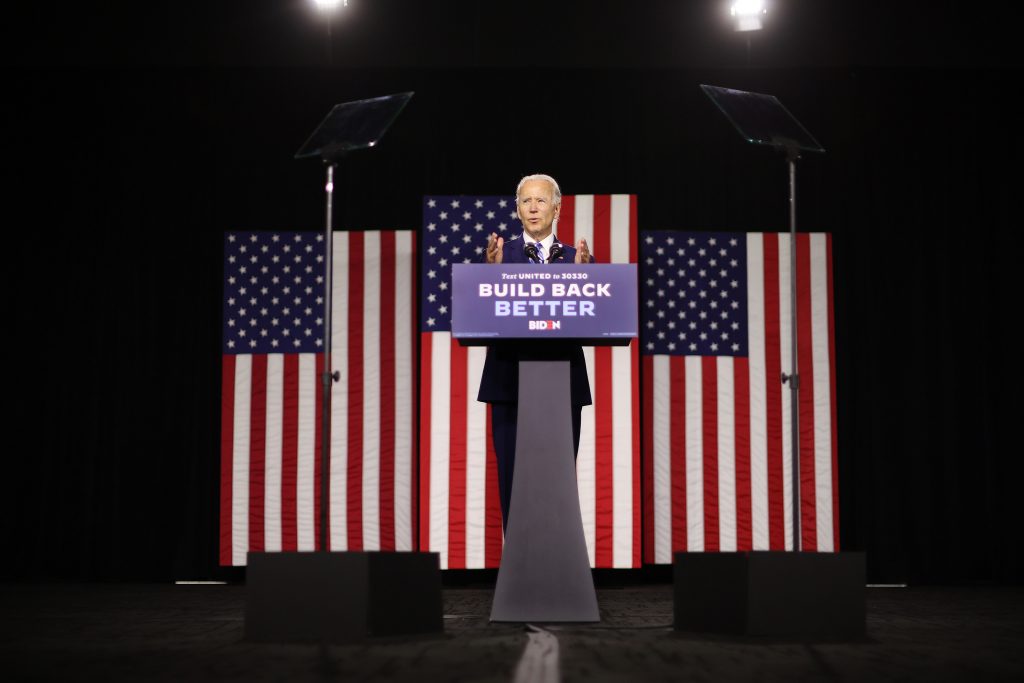 President Joe Biden benefited from a record-breaking amount of donations from anonymous donors to outside groups backing him, meaning the public will never have a full accounting of who helped him win the White House.

Biden’s winning campaign was backed by $145 million in so-called dark money donations, a type of fundraising Democrats have decried for years. Those fundraising streams augmented Biden’s $1.5 billion haul, in itself a record for a challenger to an incumbent president.

That amount of dark money dwarfs the $28.4 million spent on behalf of his rival, former President Donald Trump. And it tops the previous record of $113 million in anonymous donations backing Republican presidential nominee Mitt Romney in 2012.

Democrats have said they want to ban dark money as uniquely corrupting since it allows supporters to quietly back a candidate without scrutiny. Yet in their effort to defeat Trump in 2020, they embraced it.

For example, Priorities USA Action Fund, the super political action committee that Biden designated as his preferred vehicle for outside spending, used $26 million in funds originally donated to its nonprofit arm, called Priorities USA, to back Biden. The donors of that money do not have to be disclosed.

Guy Cecil, the chairman of Priorities USA, was unapologetic. “We weren’t going to unilaterally disarm against Trump and the right-wing forces that enabled him,” he said in a statement.

Campaign finance laws, in theory, are supposed to limit the influence big money has over politicians. But the system has gaping loopholes, which groups backing Biden and other candidates, have exploited.

“He benefited from it,” said Larry Noble, a former general counsel at the Federal Election Commission.

A Biden spokesman did not immediately respond to attempts to seek comment.

Biden raised more than $1 billion for his campaign, which can accept donations of up to $2,800 per election from individuals. That included $318.6 million from donors who gave less than $200 each. The rest of the money Biden raised came from donors with pockets deep enough to give as much as $825,000, with that money being divided among the Democratic National Committee and 47 state parties.

Dark money is not the biggest source of cash to campaigns. Wealthy donors can write eight-figure checks to super-PACs, Noble pointed out. Joint fundraising committees that raise money for campaigns and parties can bring in chunks of $830,500.

Donors who want to avoid disclosure can give to political nonprofits, like Defending Democracy Together, which spent $15.6 million backing Biden, and aren’t required to disclose their contributors to the FEC. Donors can also give money to a nonprofit that in turn gives the money to a super-PAC, like Priorities USA did. Candidates and their campaigns can’t coordinate spending with such groups under federal law.

And that lack of disclosure worries reform groups.

Big donors — individuals or corporations — who contributed anonymously will have the same access to decision makers as those whose names were disclosed, but without public awareness of who they are or what influence they might wield.

“The whole point of dark money is to avoid public disclosure while getting private credit,” said Meredith McGehee, executive director of Issue One, which advocates for reducing the influence of money on politics. “It’s only dark money to the public.”

Overall, Democrats in this election cycle benefited from $326 million in dark money, according to the Center for Responsive Politics. That was more than twice the $148 million that supported Republican groups. Some of the Democratic groups that relied on dark money in whole or in part spent heavily on early ads attacking Trump in critical battleground states like Michigan, Pennsylvania and Wisconsin. The groups started spending while Biden’s relatively cash-poor campaign was struggling to raise money for the primaries.

Future Forward PAC, a super-PAC that spent $104 million backing Biden, got $46.9 million from Facebook Inc. co-founder Dustin Moskovitz, $3 million from Twilio Inc. Chief Executive Officer Jeff Lawson and $2.6 million from Eric Schmidt of Alphabet Inc, the parent company of Google. But its biggest source of funds was its sister nonprofit, Future Forward USA Action, which contributed $61 million. The names of those who put up the $61 million don’t have to be disclosed.

The Sixteen Thirty Fund, a nonprofit that sponsors progressive advocacy, donated a total of $55 million in the 2020 election cycle to Democratic super-PACs, including Priorities USA Action Fund and Future Forward PAC, FEC records show. That total was much more than the $3 million it gave in 2018.

Amy Kurtz, executive director of the Sixteen Thirty Fund, said the surge of money to the group, which doesn’t disclose the names of its donors, included people who previously gave to Republicans or had not been engaged in politics.

The flood of dark money to Democrats and progressive groups has complicated their effort to reform the system.

“We have lobbied in favor of reform to the current campaign finance system,” she said, referring to H.R. 1, an election reform measure Democrats have proposed that includes more rigorous disclosure of donors to political nonprofits, “but we remain equally committed to following the current laws to level the playing field for progressives.”

Even Cecil, who runs the super-PAC supporting Biden, said the group supports reform.

“We still look forward to the day when unlimited money and super-PACs are a thing of the past,” he said.