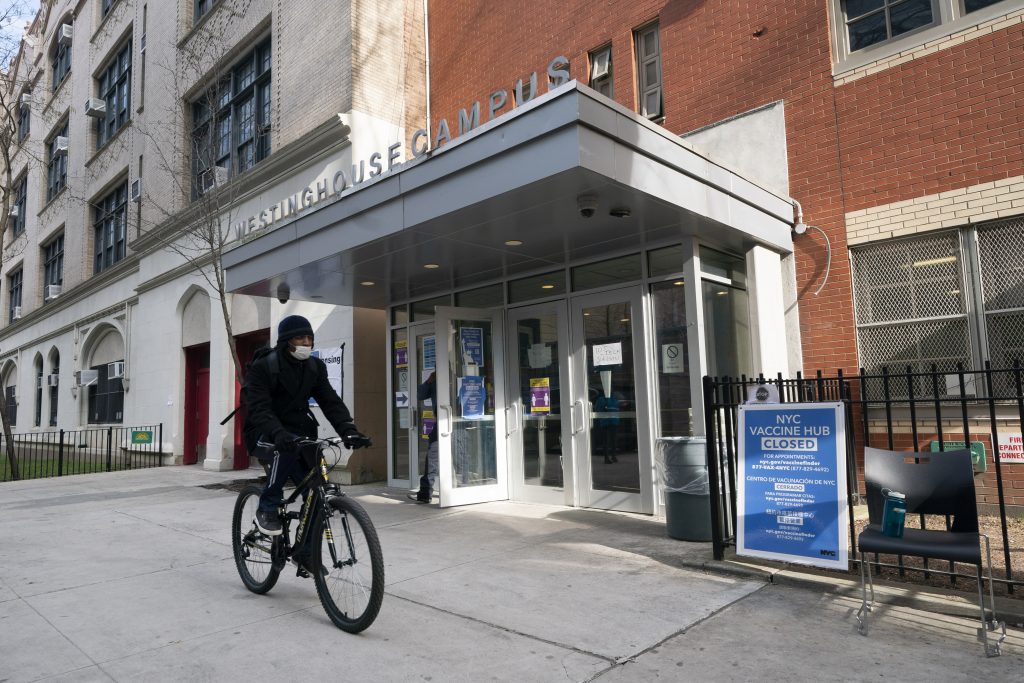 Fifteen COVID-19 vaccination hubs run by the New York City Health Department are postponing all first-dose appointments and other sites have stopped making new appointments as the state burns through its supply of the shots, officials said Thursday.

Vaccinations in the city haven’t stopped, Mayor Bill de Blasio said. Another 45,000 doses were administered Wednesday, bringing the total number of people who have gotten a shot in the city to nearly half a million.

But the city’s capacity to hand out shots, which was initially limited, now far exceeds the number of doses available.

“We’re going to be at 50,000 a day and more very soon if we have the vaccine to go with it,” de Blasio said. “It’s just tremendously sad that we have so many people who want the vaccine and so much ability to give the vaccine, what’s happening? For lack of supply, we’re actually having to cancel appointments.”

Both de Blasio and New York Gov. Andrew Cuomo have been pleading for more doses of the two vaccines that have been approved for emergency use, both of which require two doses for maximum effectiveness.

In the meantime, all Jan. 21 through Jan. 24 appointments for the first dose of the vaccine at 15 community vaccination hubs set up by the city health department have been postponed to next week.

An additional three sites run by the city’s public hospital system are running, “but vaccine is running low and all of the appointments are filled,” said Dr. Mitchell Katz, head of the hospital system.

The hodgepodge of locations where people can get vaccinated in New York City also includes private hospital systems, state-run sites and sites run by unions or employers. Some of those sites have also canceled or postponed appointments. Mount Sinai Hospital announced last week that it would “temporarily pause scheduling of non-employees” from Jan. 15 through Jan. 19.

Those whose appointments are canceled have received an email, and will receive a call from the vaccine call center to help with rescheduling, City Councilman Mark Levine tweeted, adding, “If you haven’t received a message that your appointment has been canceled assume it’s still on.”

The cancellations are an unwelcome hurdle for New Yorkers who struggled to book appointments in the first place.

Joan Jeffri, 76, said she got an email Wednesday morning postponing her vaccination appointment at a New York City-run site from Friday to Jan. 29. But then a hospital that had made but canceled an appointment for her last week called back to say it now had vaccine available. She finally got a shot there later Wednesday.

“Third time’s the charm,” said Jeffri, who had also been booked and canceled at an urgent care center last week.

Rosa Schneider jumped at the chance to book a vaccination appointment once she heard that educators like her were becoming eligible in New York. A 32-year-old high school English teacher who lives in New York City but works in New Jersey, she was eager to get fully vaccinated before in-person classes at her school are due to resume in late February. But she said that a day before her vaccine appointment on Wednesday at a city-run hospital, she got a call saying the supply had run out and the appointment was canceled.

“I was concerned, and I was upset,” said Schneider, but she’s trying daily to book another appointment and look on the bright side. She’s hopeful that availability will improve in the coming weeks, and she’s also glad her immunocompromised parents were able to get the shots already.

In addition to the shortage issue, there have been reports of understaffed vaccination sites. One Brooklynite told Hamodia she showed up on time for her vaccine appointment at Canarsie High School, this week, but due to long lines, she had to wait for three hours, outdoor in the cold, before receiving the vaccine. Staff told the woman that the site was understaffed. The Health Department subsequently told Hamodia that when it encounters long lines, it has been reassigning staff to those locations.