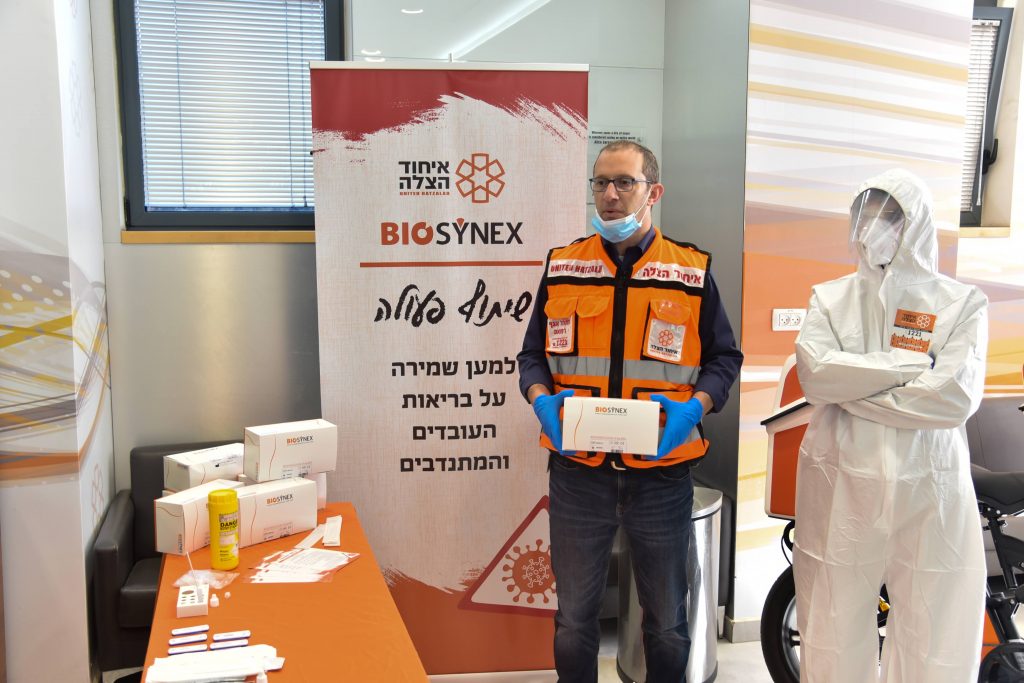 Nanosynex, a startup whose mission is to save lives by speeding up diagnostic processes, is working to bring a new inexpensive rapid testing kit in the Israeli market that will successfully detect COVID-19 antigens. The tests, which were developed by the startup’s strategic partner Biosynex, a leading French company in rapid diagnostic testing, are CE marked and currently pending approval of AMAR, Israel’s drug and medical equipment regulator. Once approval is received, Nanosynex is ready to supply millions of units of the rapid testing kits to Israeli schools, nursing homes, airports, and workplaces, in order to enable people to perform quick COVID-19 testing and receive results in 15 minutes.

To further their mission, Nanosynex held a pilot demonstration for emergency medical personnel, team leaders, and first responders, in the headquarters of United Hatzalah in Jerusalem on Thursday morning. The demonstration was held in order to train members of United Hatzalah on how to properly administer the test in the hopes that they will be able to spread the information quickly to all their teams across the country once the tests get certification. Thus, enabling the national network of first responders to test themselves with quicker results, and thus lower the morbidity rate. As part of the demonstration, Nanosynex will be donating 200 kits to the organization to use in training their volunteers on its use.

Nanosynex a young R&D startup, whose main mission is to create a rapid diagnostic test platform to check the resistance of bacteria to antibiotics, decided to join the fight against the pandemic by leveraging a strategic business partnership with Biosynex to bring the Covid-19 rapid testing kits to Israel.

“Our partner developed two rapid tests that provide results that can be read by anyone in 15 minutes; one is serological and can detect antibodies for the virus in a person’s system, and the second detects the presence of the antigen or virus. The Antigen test kit has a sensitivity that is comparable, for contagious patients, to the regular polymerase chain reaction (PCR) test that is administered currently in Israel,” said Diane Abensur Bessin, the CEO and cofounder of Nanosynex. “The antigen rapid test got excellent traction in the EU where it received the CE Mark and is widely used for massive screening. Already, 15 million units have been sold in Europe. The test has also been placed in the reimbursement basket by the French government.”

Abensur Bessin spoke about why rapid testing is so urgently needed in Israel. “We are in the middle of the worst spike that we have seen from this pandemic. Our economy has been closed for almost a year and the infection is not slowing down despite a three-week lockdown. The widespread application of a rapid test will allow for mass screenings in a format that is less expensive, easy to use, without the use of laboratories, and will allow businesses and offices to reopen.”