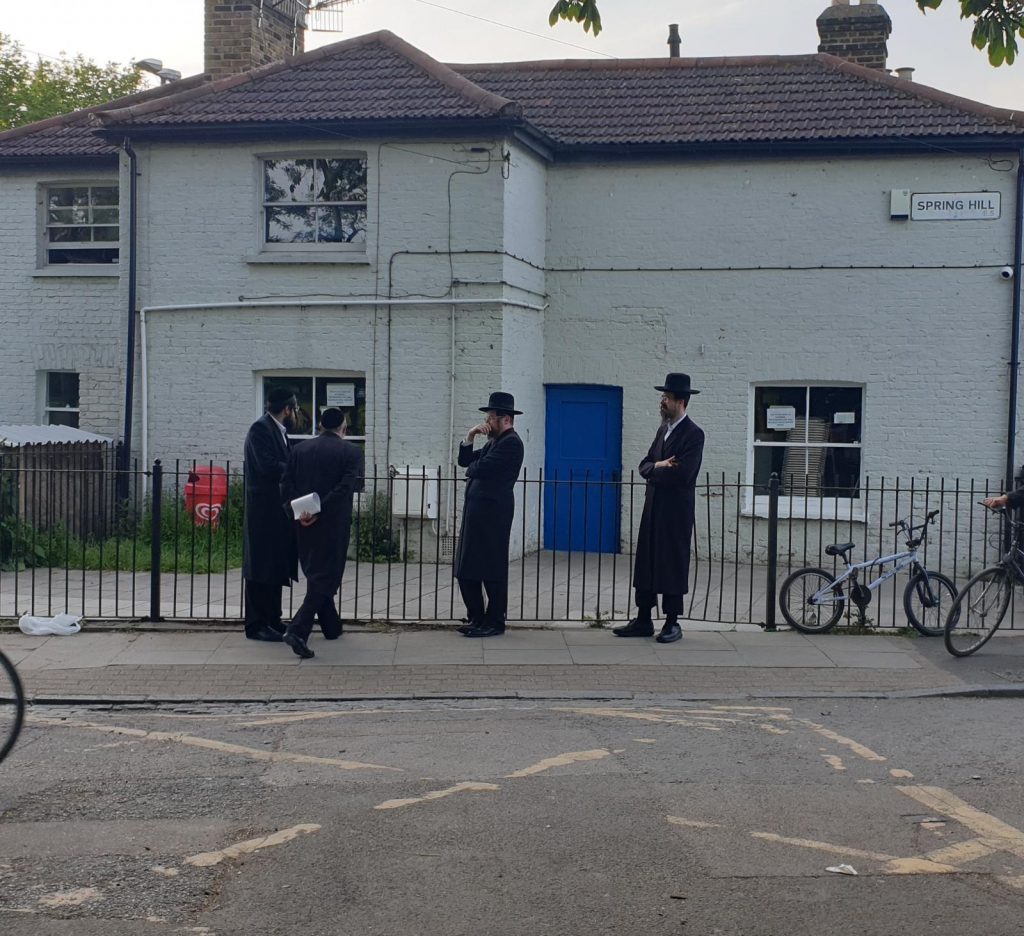 How did the eiruv start?

Last year before Pesach we saw that something needed to be arranged. Many people were making minyanim outside in their gardens. In many places they did not realize that their gardens were open to the street. They did not have kosher mechitzos around their property, so when they carried siddurim and other items outside there was widespread unintentional chillul Shabbos. A few of us in the Tottenham area tried to make an eruv for one or two streets, such as Elm Park Avenue and Clifton Gardens. Later, others tried to do the same for their streets. But unfortunately there are many halachic details that need to be known. We could see that some supervision was needed. So we proceeded to the next stage, which was making a larger eruv that would include many streets in the Tottenham and Stamford Hill area. With much effort, this eruv was ready for Shavuos.

What difficulties did you have to overcome?

First of all, we needed to make sure that everything was legal. Even though anyone can put a fence around their garden, as soon as you want to put something in the street you need authorization. As we needed to stretch a string across public streets, you need to obtain an over-sailing license; otherwise it can be taken down. We also had to take out public liability insurance in case someone would claim that they were damaged by part of the eruv.

We needed to overcome public opinion. As you may have heard, other people get very suspicious when they hear about the wires and poles. Luckily, they understood that it was just “religious and symbolic” and they were not worried. We had to approach private individuals to get their permission for some of the installations, and we had to speak to the local Council, to explain our project and get their support.

In many towns, constructing an eruv is a great expense for the kehillah. However, in North London we are all greatly indebted to SAM Planning, which sponsored the cost of the eruv.

The speed with which the eruv was constructed was really remarkable. We received the agreement of the UOHC to go ahead and make the eruv on May 15, and the project was completed a mere three weeks later on June 9.

What halachic considerations did you have?

Our highest priority was to ensure that the eruv would be acceptable to the highest specifications. The UOHC has a special designated Vaad Tikkun Chatzeros. Until now, this Vaad has been mainly concerned with making sure that mechitzos around shuls and private properties are kosher for Shabbos. Now, we were making a public eruv and we asked for their involvement and approval. Dayan A. D. Dunner, shlita, dedicated much time and effort to ensure that everything was k’das uk’din. The result has been that the eruv incorporates the top hiddurim.

For example, one of the classic issues in making an eruv in a non-Jewish town is obtaining permission from the non-Jews. In our eruv, we actually approached every resident and paid a token sum to get their permission.

Another example of this is our use of natural boundaries. Our work was made much easier because there are fixed boundaries already around the area of the eruv. This includes the River Lea that runs down one whole side of the area, and Springfield Park. Because of this, certain areas were left out of the eruv – for example, Rookwood Road and part of Ravensdale Road.

We also wanted to make sure that no one would use the eruv and then accidently carry outside the eruv. So we had clear warning notices put up by the entrances to the eruv area. We  also distributed fridge magnets with maps of the eruv to every household, so that everyone can see exactly which roads are in the eruv and which ones are outside.

The result is an eruv that can be trusted and relied upon by everyone without a doubt.

What feedback have you had from the tzibbur about the eruv?

The response has been overwhelmingly positive. Besides making sure that now people can carry in their own gardens, it has been a real life-changer for many users of the eruv. Until now, very many old and infirm people had to spend Shabbos by themselves, but now they can be taken out by their family. Similarly, young babies can be taken in prams to kiddushim in the area.

Our eruv is proud to be recognized by the UOHC, which has allowed us to put their hechsher on it. In addition, many Rabbanim have spoken in strong support of the eruv that has made life easier for so many people.

What are your plans for the future?

We are hoping to make the eruv more permanent. Instead of using temporary supports, we intend to replace them with metal poles together with special strong synthetic cords. We have drawn up plans to enlarge the area covered by the eruv. At the moment, the Rabbanim of the UOHC have merely given their approval to the eruv. We hope that in future the UOHC will take responsibility for the project.

Of course, all these ambitious plans will come at a cost. We are making a campaign to raise the money in order to improve this vital facility. The eruv is a project that benefits everyone!