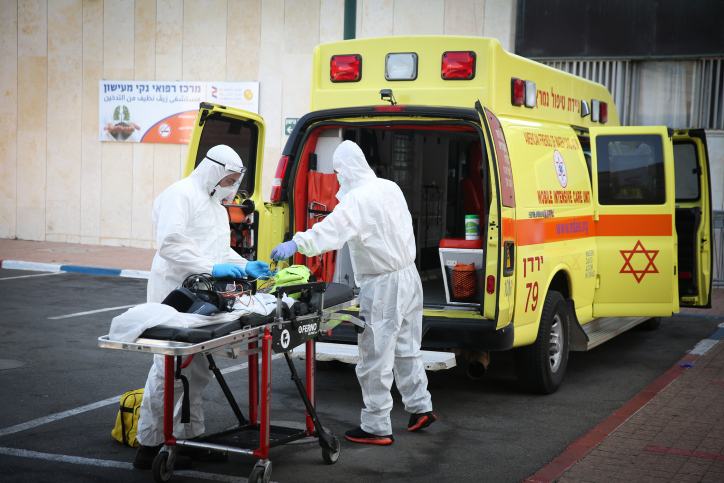 For the first time since the start of the pandemic, Israel on Monday recorded more than 10,000 new coronavirus cases. The Health Ministry said on Tuesday that 10,021 cases were confirmed on Monday of the 100,000 tests conducted, indicating a 10.2% positivity rate.

As the coronavirus cases have increased alarmingly, the number of patients in serious condition has also increased. As of Tuesday, 1,114 corona patients are hospitalized in serious condition, and 277 people are on ventilators. Health officials are predicting another wave of infection, despite the progress of the vaccination campaign.

According to data collected by Oxford University, Israel leads the world in daily confirmed cases per capita for the past week.The record-breaking number of cases confirmed could be attributed to the county’s extensive testing effort which places Israel fourth in testing after Austria, the UAE and Luxemburg.

Also Tuesday, the HMOs announced that the vaccine campaign is expanding to all Israelis 40-years-old and older, with over 2.2 million post the first vaccination.

The Health Ministry will demand an extension of the closure by two weeks at a Cabinet meeting later Tuesday. According to the proposal to be presented, the heavy burden on hospitals and high morbidity rate require closure for an extended period of two weeks.

Coronavirus commissioner Prof. Nachman Ash addressed the issue of hospital overcrowding.“The crowding is real and the hospitals do need help,” he said. “But I think there isn’t a problem in accepting patients and I do not believe that there will be any need to limit the number of people who can be hospitalized. We will open as many beds as needed.”

Prime Minister Binyamin Netanyahu said at the beginning of the Cabinet meeting where the extension of the lockdown will be decided upon Tuesday, “We find ourselves in the middle of a close race between the vaccination campaign and the rising morbidity in the world because of the mutations. We must continue to make the right decisions for the citizens of Israel. We need to decide immediately on a further extension of the current lockdown. It may not be popular, nor is it convenient during the election period, but it’s what we need to choose today and I expect everyone to support it.”