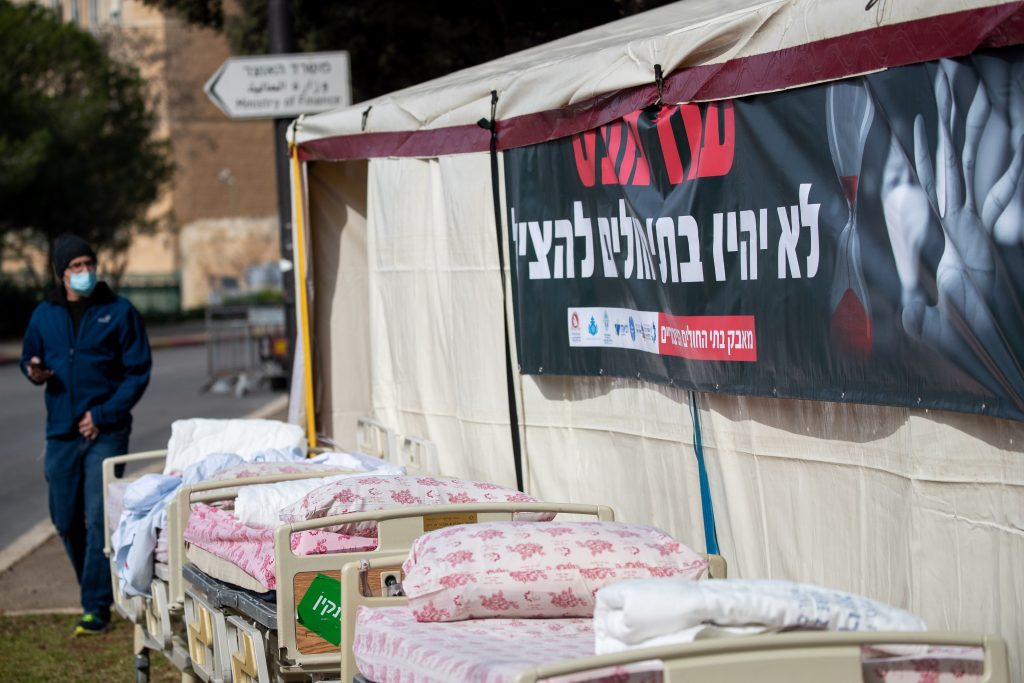 During a meeting on Monday of the Constitution, Law and Justice Committee, Committee Chairman MK Rabbi Yaakov Asher (UTJ) discussed his meeting earlier in the day with hospital directors at a protest tent outside the Treasury building in Yerushalayim. “It cannot be that, during times of corona, seven hospital directors will be in a tent outside the Finance Ministry. I call on the Prime Minister, the finance minister and the health minister to resolve the issue immediately. This must not happen,” he said.

“We are currently in a state of war, and in a state of war you do not begin checking prior commitments or this or that budget. Rather, you check to see what the most urgent thing that will allow them to operate in the coming days and months is,” Committee Chairman MK Asher said. “Just as the government knows to come to the committee and ask for [the approval of] regulations that restrict people’s liberty, which we usually do not institute – and all this under a declaration of an emergency – so too, the declaration of an emergency is very much a declaration of a medical emergency.”

Rabbi Asher added: “If the hospital directors have to worry about making ends meet and paying salaries to workers who are currently fighting for the lives of hundreds of citizens, it cannot be that they will have to sit and wait for someone to solve their problem. A significant sum must be transferred to them for resolving the problem. When the state of emergency ends, then they can see what the correct budget should be, but now is a time of war.

“The director general of Shaare Zedek, who hasn’t left the hospital for 35 years, is there [in the protest tent] with tears in his eyes, saying he should not be there, but on the front with his workers. This is the ‘Iron Dome’ of our health. I am asking the finance minister – I am aware of his abilities and what he is doing these days to save the self-employed and the unemployed – to drop everything, sit down with them and finalize a five-month emergency plan, and deal with the rest later.”