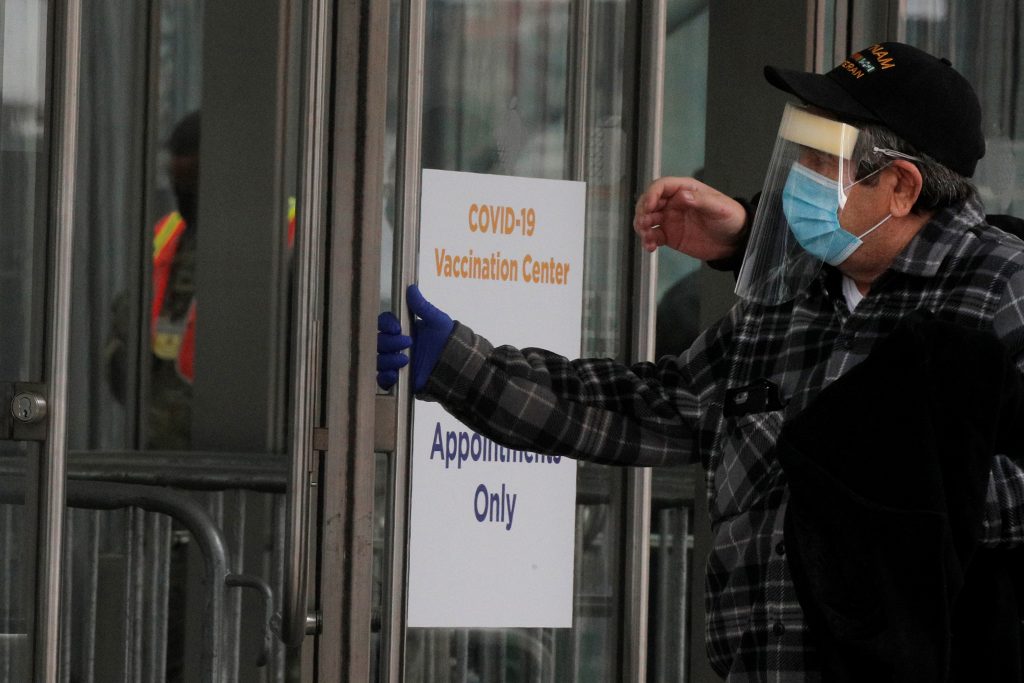 Scattered shortages of COVID-19 vaccines persisted on Saturday under pressure from growing demand, as previously inoculated Americans returned for their required second shots and millions of newly eligible people scrambled to get their first.

The supply gaps, coming as the U.S. vaccination effort enters its second month, prompted some health-care systems to suspend appointments for first-time vaccine seekers and one New York health-care system to cancel a slew of existing ones.

Northwell, New York’s largest health-care provider, offers appointments only as it gets more vaccine, and only after allocating doses to people scheduled for their second shots, Kemp said.

Although the supply flow has been sporadic, Northwell expects to offer appointments in the coming week, he added.

Both approved vaccines, one from Pfizer Inc. and BioNTech and the other from Moderna Inc., require a booster three to four weeks after the first shot to maximize their effectiveness against the coronavirus.

While health-care workers and nursing home residents and staff got first priority, eligibility for the vaccines has since widened, with some states opening it to healthy people aged 65 and up and people of any age with pre-existing conditions.

In Oregon, Governor Kate Brown said vaccinations for seniors and educators would be delayed, while Vermont Governor Phil Scott said the state would focus exclusively on its over-75 population because of “unpredictable” federal supplies.

“Rather than over-promising a limited supply to a broad population that we know we can’t vaccinate all at once, we believe our strategy will get shots in arms faster and more efficiently, with less loss of life,” Scott said on Twitter.

New York’s Mount Sinai Hospital said on Friday that it canceled vaccination appointments through Tuesday because of “sudden changes in vaccine supply.”

An official at NYU Langone Health, another health-care giant, said it has indefinitely suspended new appointments because it had received no confirmation that it would get more vaccine.

New York City Mayor Bill de Blasio said on Friday that while the city was ramping up its vaccination capacity, supplies were still coming in at “a very paltry” 100,000 doses a week, which put it on course to run dry in the coming week.

Jack Sterne, a spokesman for the state, blamed the supply problems on the federal government, which he said was cutting New York’s vaccine shipment in the coming week by 50,000 doses to 250,000.

“The problem all along has been a lack of allocation from Washington, and now that we’ve expanded the population of those eligible, the federal government continues to fail to meet the demand,” Sterne said by email.

Adding to the intergovernmental tension was a squabble in which several governors accused the Trump administration on Friday of deceptively pledging to distribute millions of COVID-19 vaccine doses from a stockpile that the U.S. health secretary has since acknowledged does not exist.

Since the first vaccine was administered in the United States in mid-December, nearly 12.3 million doses have been given, out of 31.2 million doses distributed, according to the Centers for Disease Control and Prevention. The total includes 1.6 million people who have received both doses, the CDC said.

Since the onset of the pandemic, 23.4 million Americans have been infected with the coronavirus, 392,153 of whom died, according to a Reuters tally.

While seriously ill patients are straining health-care systems in parts of the country, especially in California, the national rate of hospitalizations has leveled off in the past two weeks and was at 127,095 on Friday.

A widely cited model by the University of Washington projects that January will be the deadliest month of the pandemic, claiming more than 100,000 lives.

But the newly revised model of the university’s Institute for Health Metrics and Evaluation projects that the monthly toll will abate thereafter, shrinking to about 11,000 in April, as more people are vaccinated.

“By May 1, some states may be close to herd immunity,” the IHME said.