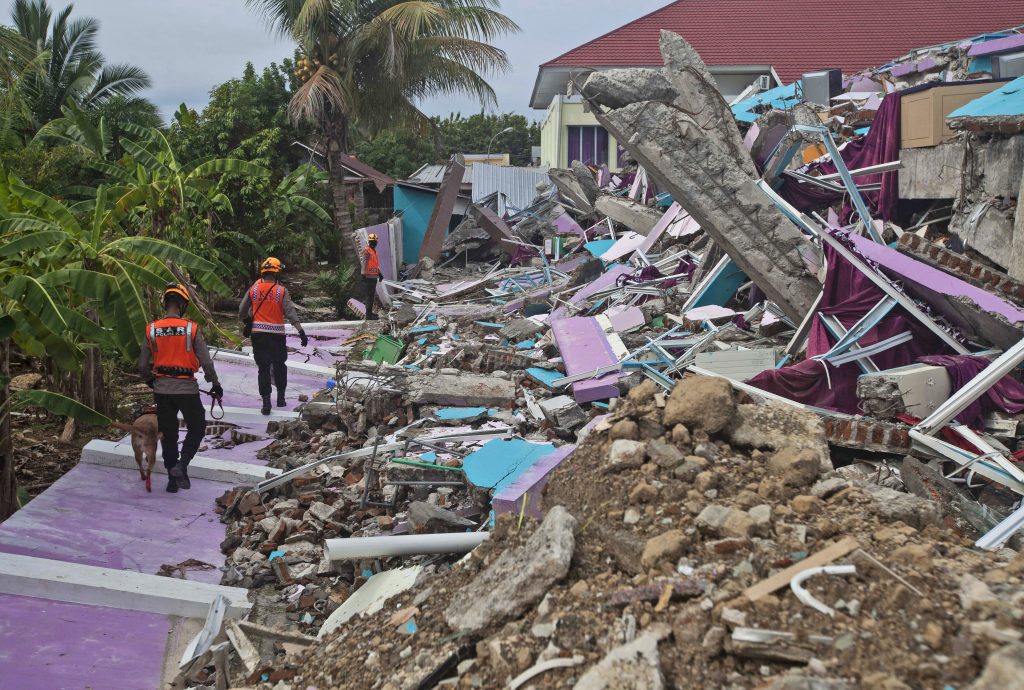 Indonesian rescuers on Sunday retrieved more bodies from the rubble of homes and buildings toppled by a strong earthquake, raising the death toll to 73, while military engineers managed to reopen ruptured roads to clear access for relief goods.

Thousands were left homeless and more than 800 have been injured, more than half still receiving treatment for serious injuries, Jati said.

The disaster agency’s data showed nearly 27,850 survivors were moved to shelters. Most of them went to makeshift shelters that have been lashed by heavy monsoon downpours. Only a few were lucky to have tarpaulin-covered tents.

They said they were running low on food, blankets and other aid, as emergency supplies were rushed to the hard-hit region.

“We are unable to return to our destroyed homes,” said a father of three who identified himself only as Robert.  He said he had fled from his bed while being treated at Mamuju’s Mitra Manakarra hospital, which was flattened by the quake. He and his family are among thousands of displaced people who took shelter in a hilly area.

He said his bed was shaking when he awoke and realized that it was an earthquake. He then removed a drip from his hand and ran out. He had seen several nurses helping patients who were unable to move before the building collapsed.

“I cried when I saw the hospital where I was being treated collapse with people still inside. I could have died if I got out late,” he said.

Rescuers managed to retrieve four survivors and four bodies from the rubble of the flattened hospital, according to the Search and Rescue Agency.

Jati said that at least 1,150 houses in Majene were damaged and that the agency was still collecting data on damaged houses and buildings in Mamuju.

Mamuju, the provincial capital with nearly 300,000 people, was strewn with debris from collapsed buildings. The governor’s office building was almost flattened by the quake and a shopping mall was reduced to a crumpled hulk.

The disaster agency said the army corps of engineers cleared the road connecting Mamuju and Majene that was blocked by landslides. They also rebuilt a damaged bridge.

Many on Sulawesi Island are still haunted by a magnitude 7.5 earthquake that devastated Palu city in 2018 and set off a tsunami that caused soil to collapse in a phenomenon called liquefaction. More than 4,000 people were killed, including many who were buried when whole neighborhoods were swallowed in the falling ground.

Indonesia, home to more than 260 million people, is frequently hit by earthquakes, volcanic eruptions and tsunamis because of its location on the “Ring of Fire,” an arc of volcanoes and fault lines in the Pacific Basin.

A massive magnitude 9.1 earthquake off Sumatra Island in western Indonesia in December 2004 triggered a tsunami that killed 230,000 people in a dozen countries.