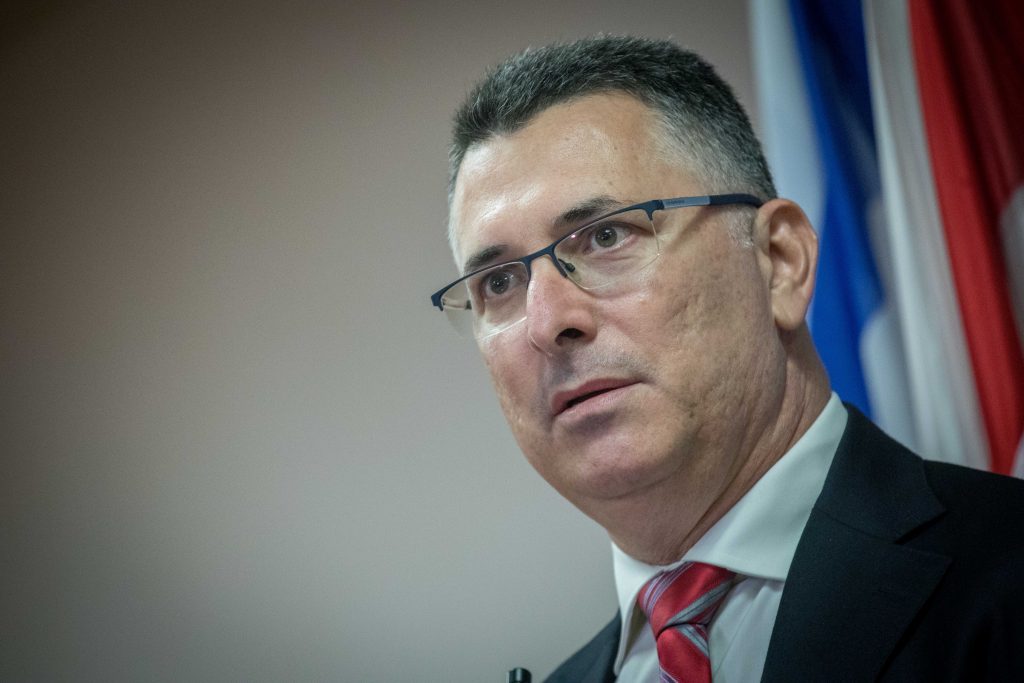 Prime Minister Binyamin Netanyahu’s top challenger in upcoming elections is promising a tough line toward Iran and the Palestinians, yet expressed confidence that he has the tools to avoid what appears to be a collision course with the incoming Biden administration.

In an interview, Gideon Sa’ar voiced harsh criticism of Netanyahu, accusing the Prime Minister of turning the ruling Likud party into a “cult of personality” as he faces a corruption trial. While welcoming President Donald Trump’s affinity for Israel, he acknowledged that Netanyahu’s close ties with the former President had alienated many Democrats and vowed to restore traditional bipartisan support for Israel.

“I think I am in a better position than the Prime Minister to have an effective and true dialogue with President-elect [Joe] Biden and his administration,” he told The Associated Press.

That could be critical given the deep differences between Israel and Biden, who plans to return to the Iranian nuclear deal and adopt a more balanced approach to the Israeli-Palestinian conflict.

Sa’ar, who defected from Netanyahu’s ruling Likud Party last month, shares the Prime Minister’s hard-line nationalistic ideology. He is a strong proponent of the Jewish communities in Yehudah and Shomron, rejects the idea of a construction freeze and favors the eventual annexation of the communities. He said he would never agree to an independent Palestinian state that includes the removal of Jewish communities.

“I oppose a Palestinian state in the heart of our homeland,” he said. “I think it will not bring peace and it will undermine stability and security in the region.”

These positions will put him at odds with Biden, who — like many of his predecessors — opposes settlement construction and favors a two-state solution between Israel and the Palestinians. Sa’ar seems to be counting on his reputation as a bridge builder to massage the inevitable disagreements likely to arise.

His demeanor and style are starkly different from Netanyahu’s. While Netanyahu is a firebrand orator, Sa’ar, a lawyer by training, speaks methodically, often pausing to find the right word.

But as with many other fast-rising Likud figures, he eventually had a falling out with Netanyahu. Sa’ar took a break from politics in 2014 to spend time with his new wife and their children.

He returned in 2019 but never seemed to repair his ties with Netanyahu. Later that year, Netanyahu trounced him in a party leadership vote, confining Sa’ar to the backbenches.

Since bolting Likud and launching his “New Hope” Party last month, Sa’ar has made no secret that their battle is personal. In his inaugural speech, he accused Netanyahu of creating a “cult of personality” — a term he repeated Thursday to describe those who blindly support Netanyahu’s claims that his corruption trial is a conspiracy.

Sa’ar said a key moment for him came last May, when Netanyahu arrived at the courthouse for the opening of his trial joined by a group of Likud ministers and lawmakers. The group stood silently behind Netanyahu as he accused the media and justice system of trying to topple him.

“A cult of personality is when the most important thing in order to be advanced in a political system is to flatter and serve the personal interests of its leader,” Sa’ar said. He said that while Netanyahu has the right to fight the charges against him, his claims of a grand conspiracy are “absolute nonsense.”

Netanyahu’s tactics have drawn comparisons to Trump, who showered his Israeli counterpart with diplomatic gifts, ranging from the recognition of Yerushalayim as Israel’s capital to brokering normalization agreements between Israel and four Arab countries.

Sa’ar said he had great respect for Trump’s contributions to Israel and did not want to wade into U.S. politics. But in an apparent reference to the pro-Trump mob that stormed the Capitol, he said: “I cannot identify with talk that delegitimized the democratic electoral process and its results.”

Sa’ar is among the legions of critics who believe that Israel is being dragged into its fourth election in just two years due to Netanyahu’s legal troubles and divisive personality.

Sa’ar, emerging as Netanyahu’s biggest challenger in the March 23 election, appears poised to prevent that. Opinion polls project New Hope will become the second-largest party in parliament, smaller than Likud but with enough seats to prevent Netanyahu from assembling a majority.

That has made Sa’ar the unofficial leader of a diverse group of “anyone but Bibi” parties that refuse to serve under Netanyahu. Netanyahu says his opponents are motivated by sour grapes and little more than shared animosity toward him.

Sa’ar believes he can find enough common ground to form an alternative coalition. In a reflection of his political savvy and ability to work with rivals, he coordinated a surprise late-night parliamentary maneuver last month that caused the coalition to collapse.

Sa’ar described himself as pragmatic. He said, for example, that he welcomed Netanyahu’s agreement to shelve a plan to annex parts of Yehudah and Shomron as part of last year’s agreement establishing diplomatic ties with the United Arab Emirates. He said he would respect that pledge if elected.

If elected, Sa’ar’s first big test with the Biden administration is likely to be the Iranian nuclear issue.

In 2015 Netanyahu famously delivered a speech to Congress to lobby against the Iran deal as then-President Barack Obama was wrapping it up. Netanyahu was a driving force in Trump’s decision to withdraw from the deal, one of Obama’s signature achievements. His confrontation with Obama remains a sore point with many Democrats.

Sa’ar said he respected Netanyahu’s campaign, but that times have changed and a new approach will be needed to make sure the nuclear deal is not revived in its original form. He said he would seek a mutually respectful dialogue to ensure that Iran never develops a nuclear bomb.

“I will have to deal with the political reality of 2021,” he said. “I will do it much better than anyone else.”