Jewish Home in Williamsburg Shot at With BB Gun; No Injuries 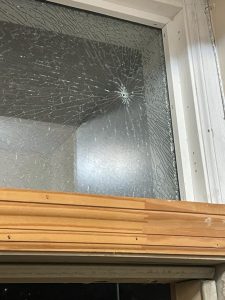 A Jewish family’s home in Williamsburg was shot at by an unknown attacker Thursday night.

A 13-year-old boy returning from yeshiva at 9:30 p.m. was walking into his home at Marcy Avenue and Rutledge Street, when a dark-colored car turned onto Rutledge. A person in the car fired four shots from a BB gun, and at least one shot hit the window just above the door that the boy was walking through.

There were no injuries. It is unclear whether the shooter had been aiming at the boy.

Police and Shomrim responded to the scene and are reviewing surveillance footage.

In the first video below, the shots can be heard, but the vehicle is blocked by the steps.

The second video below is silent, the vehicle is visible turning onto the street.