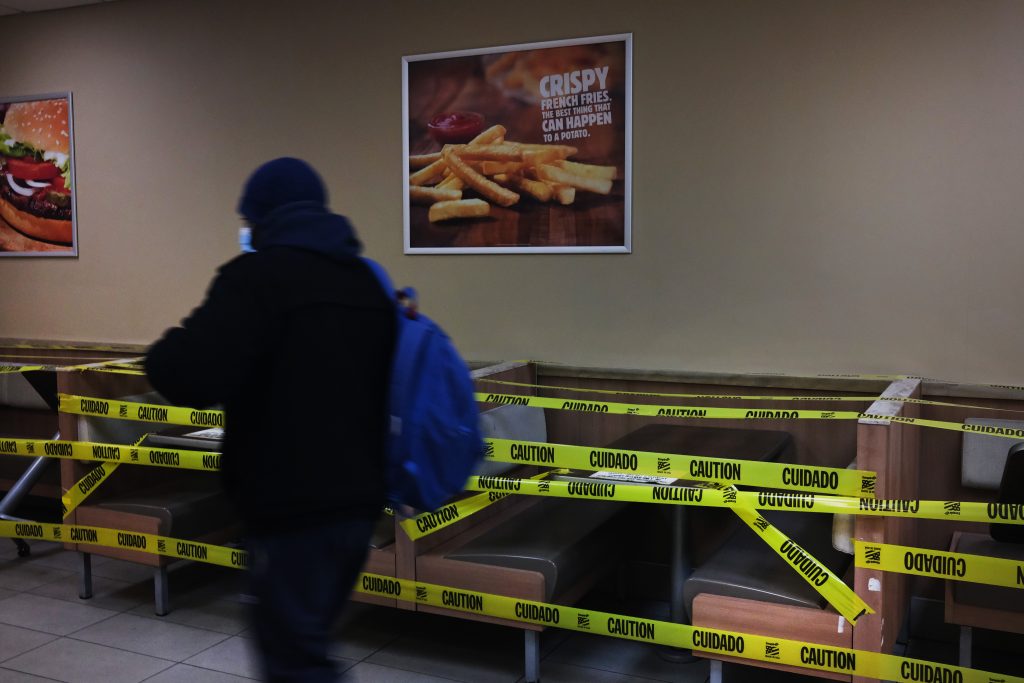 The ruling only applies to restaurants outside New York City. The lawsuit did not address New York City, where the governor has banned all indoor dining regardless of what colored zone the restaurant is in.

Cuomo’s counsel, Kumiki Gibson, said the governor’s office disagreed with the decision and is reviewing it but will abide by it. She pointed to federal data demonstrating that indoor dining increases the spread of COVID-19.

Nowak gave his injunction only to the restaurants that had sued, but Gibson said that the state will allow it to apply to all non-NYC restaurants, “to ensure uniformity and fairness.”

In his ruling, Nowak said he couldn’t “find evidence that the state had a rational basis to designate portions of Erie County as an orange zone” and that the restaurants would suffer “irreparable harm” without the injunction.

New York City’s restaurant industry is calling on Cuomo to also halt his indoor dining ban in the city. Manhattan has relatively low rates of cases and hospitalizations, though rates are higher in Staten Island.

“Continuation of the indoor dining ban in New York City is divorced from any of the data and criteria the state has articulated and must be ended now,” NYC Hospitality Alliance executive director Andrew Rigie and executive director and counsel Robert Bookman said in a joint statement.

It’s the latest lawsuit that has questioned Cuomo’s micro-cluster approach launched in October.

Cuomo proposed imposing COVID-19 restrictions based on addresses of people testing positive, rather than statewide like last spring. Courts long deferred to Cuomo’s emergency authority, but restaurants and houses of worship have seen some success arguing Cuomo has gone too far.

The U.S. Supreme Court barred Cuomo in November from enforcing 10- and 25-person attendance limits at houses of worship in Brooklyn and Queens red and orange zones, respectively. Cuomo called that decision “irrelevant” because those areas were by then no longer in red or orange zones.

But in late December, the U.S. Court of Appeals for the Second Circuit ruled that Cuomo’s attendance policy “discriminates against religion on its face” and ordered the federal district court to issue a preliminary injunction prohibiting enforcement of the limitations on houses of worship in red and orange zones statewide.

Cuomo’s Thursday announcement was welcome news for county officials and restaurant owners who question why Cuomo has kept only some orange zones even as cases rise elsewhere.

“We really wanted to, but we’re trying to do what’s right and abide by the law,” he said, adding: “Now that we’re all able to open, it’s easier.”

New York State now has no red zones, only several orange and yellow zones, even as nearly the entire state is seeing high-enough positivity rates to qualify under Cuomo’s original red-zone metrics. Cuomo hasn’t updated zones in weeks, and said in December that from now on he will place areas in colored zones only if their hospitals are at at least 85% capacity and if the zones reaches at least a 4% COVID positivity rate.

Red zones shutter nonessential businesses and outdoor dining, while orange zones only allow outdoor dining or takeout and limit gyms and hair salons to 25% capacity. Cuomo originally shuttered schools in those zones, but later allowed them to reopen if they launch testing programs.

New York is far below the mid-April peak of COVID-19, but infections surged this fall and winter. The state now ranks 12th in the nation for its average of hospitalizations and new cases per-capita over the past seven days.

In central and northern New York, Herkimer and Lewis counties have averaged a higher rate of new COVID-19 cases per-capita than Arizona over the past seven days. Long Island’s Suffolk County has a higher rate than California.

And Cuomo’s approach has fueled disagreements between state and local officials, whose data can often differ, and confusion for residents.

Chemung County’s own dashboard cites 210 active cases, 70 deaths of county residents and 57 residents hospitalized. But the state’s data — which doesn’t include hospitalizations by county — lists 107 deaths in total and 720 new cases over the past 10 days.

County public health spokesman Vincent Azzarelli said he doesn’t know why the state’s fatality count is different. He said the county’s “active cases” are cases the department is currently monitoring.