Israel Outgoing U.S. Amb. Friedman: The Recognition of Yerushalayim Turned Out to Be an Explosion of Peace
Israel 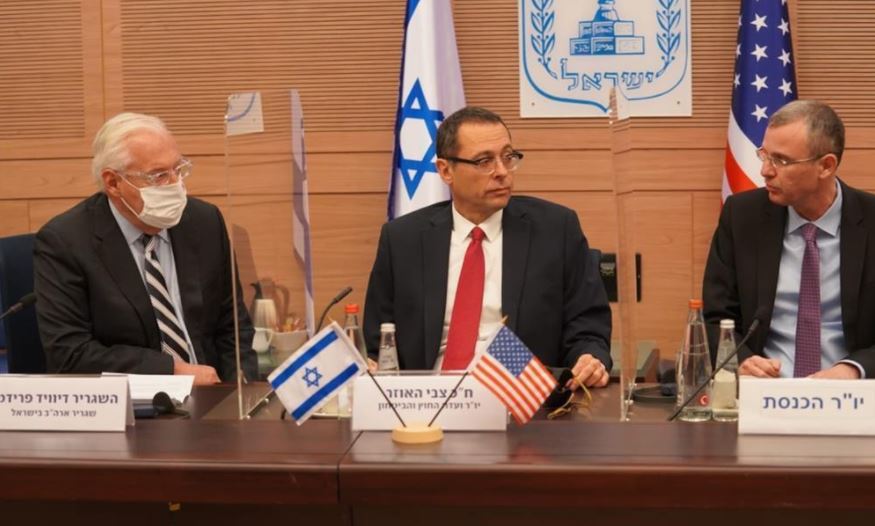 ​The Foreign Affairs and Defense Committee’s Subcommittee for Policy and Strategy, chaired by MK Zvi Hauser, held on Monday a special meeting in honor of U.S. Ambassador to Israel David Friedman, ahead of the end of his term in Israel in light of the regime change in the U.S. The meeting was held in the presence of Speaker of the Knesset MK Yariv Levin (Likud).

Chairman MK Hauser said that during his term, Ambassador Friedman “realized the dreams of us all – to change a historic distortion and implement, in practice, the traditional position of the United States and its historic viewpoint that the capital of the state of the Jewish people in the Land of Israel is Yerushalayim.” Hauser noted that Ambassador Friedman “had the privilege of dedicating, with his own two hands, the embassy in the eternal capital of the Jewish people.”

“Alongside this, he also had the privilege of being a part of the Abraham Accords, which solidify the change in paradigm that took place in the Middle East a decade after what was termed the ‘Arab Spring’ – the true recognition that Israel is not the problem of the Middle East, but rather that Israel is a key component in resolving the region’s problems,” said the committee chairman.

“The Abraham Accords are the result of insistent American policy to recognize the Jewish nation’s right to self-determination and to renew its sovereignty in peace and security, and for all this, and for many other things, we thank you,” Hauser told the American envoy.

Speaker Levin noted Ambassador Friedman’s “immense contribution” to U.S.-Israel relations. “The current relations between the United States and Israel, and between Israel and the Middle East, are completely different than they were when you assumed your post,” Levin told Friedman.

“These things did not happen by chance. They are the result of your personal vision, and investment in things that seemed almost impossible. We’ve yet to truly comprehend the influence and significance of all that you have done.”

Ambassador Friedman said the relations between the U.S. and Israel are based on respect, mutual appreciation and genuine fondness, and “in both countries [people] work hard to promote the interests of freedom, justice, democracy and faith.”

“We’ve succeeded in strengthening the relations between Israel and the United States … and in making our nations safer and more prosperous than ever,” he stated.

Friedman listed the Trump administration’s accomplishments vis-à-vis Israel, including the recognition of Yerushalayim as Israel’s capital and Israeli sovereignty over the Golan Heights, and the non-illegality of communities in Yehudah and Shomron.

“I think that having the benefit of now four years of perspective, I do think the most important thing that we did was what we did early on, which was recognizing the capital of Israel. That set the right tone, the right theme for our presidency,” he said.

“That strengthened the president not just here but throughout the world. It strengthened him with Iran, with North Korea, because we took the position that America will stand with its friends, America will not flinch [and will not] be afraid of its enemies or those that challenge it. America will stand for the truth and do the right thing, and if there are consequences we’ll protect our friends and our allies and our citizens.”