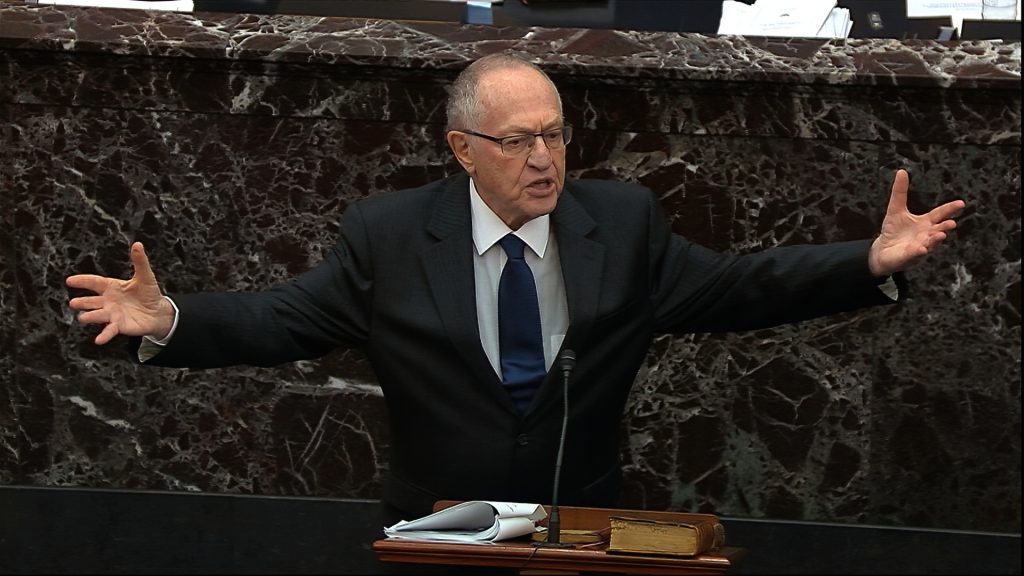 The dust had barely settled following the violent protests by supporters of President Donald Trump inside the Capitol last Wednesday, when the calls began — first by Democrats, then by some fellow Republicans — for Trump to be removed from office.

Trump’s critics allege that it was his earlier speech at a rally held near the White House, in which he repeated his claims of election fraud, that incited the crowd to march over and bust into the Capitol, in a riot that resulted in five deaths.

Short of Trump resigning, or Vice President Mike Pence invoking the 25th Amendment — which allows the Vice President to become Acting President if the Vice President and a majority of the Cabinet declare “that the President is unable to discharge the powers and duties of his office” — Trump faces the prospect of impeachment for the second time, just days before his term ends on Jan. 20.

Do Trump’s comments at the rally constitute incitement to violence? Should he be forced out, under the 25th Amendment or impeachment? Was it appropriate for social-media companies like Twitter and Facebook, who are not subject to First Amendment restrictions, to ban the President’s personal account from their platforms — and should they no longer be considered platforms but publishers?

Hamodia discussed these issues with Alan Dershowitz, professor emeritus at Harvard Law School, a noted First Amendment lawyer, and a liberal who has made headlines for his defenses of Republican President Trump in the media. Dershowitz served as Trump’s attorney during his first impeachment trial in the Senate, but at the time of our phone conversation Sunday afternoon, he said he had not been contacted to defend the President in any case related to the Capitol riots.

What’s your view of the events that occurred last week Wednesday?

I think that President Trump made a terrible speech; I wish he hadn’t done it. I’m strongly opposed to what he said. But I think what he said was completely protected by the Constitution — it was core political speech, right within the heartland of the First Amendment, and it would be unconstitutional to impeach him for that.

Do you believe that that speech constituted incitement to violence?

No, absolutely not. If it did, it would be outside the Constitution. It did not. The Supreme Court has defined incitement very precisely and very specifically, and this case doesn’t even come close to that. It’s advocacy, and advocacy is protected by the First Amendment.

It’s totally inapplicable. The 25th Amendment is for people who are unconscious, incompetent, have a stroke, Alzheimer’s, or a heart attack. It has nothing to do with political speeches or anything of that kind. It would be unconstitutional to try to remove him under the 25th Amendment.

When you say “incompetent,” do you only mean physically incompetent?

“Unable” means, if you look at the framers, what they had in mind was physically unable or mentally unable, mostly physically unable — what they had in mind was, you know, President Wilson, who had a stroke or, later on, President Reagan, who was shot, or even President George W. Bush, who had a colonoscopy and had to be unconscious and was relieved of duty for a time. Nothing to do with these events — it would be a complete, not only a stretch, but a break of the Constitution to apply the 25th Amendment to President Trump here.

It says “unable,” but it doesn’t say clearly whether that means physical, or just that you don’t like what he says.

But it says “unable.” Trump is able. And all he has to do is write a letter saying, “I’m able,” and that ends it.

So you believe there’s nothing content-wise that would allow the 25th Amendment to be invoked?

Absolutely. It’s not even close.

So if you believed, theoretically, that a President were completely unhinged and doing crazy things, you could not invoke the 25th Amendment?

When you say “completely unhinged,” I don’t know what that means. If he’s mentally ill, if he’s psychotic — James Forrestal was the secretary of Defense [from 1947 to 1949] and he was paranoid schizophrenic, having hallucinations that the Russians were invading us — that would be a basis. But what President Trump is doing is not even close.

Political conduct or even criminal conduct, right? Even if he theoretically did criminally incite a crowd —

So let’s move on to impeachment. Do you believe that impeachment is appropriate in this case?

The words of the Constitution are [Article II, Section 4], “The President, Vice President and all civil officers of the United States, shall be removed from office on impeachment for, and conviction of, treason, bribery, or other high crimes and misdemeanors.” So you believe that he has to have committed a crime?

I think he has to have committed criminal-like behavior. I testified for 67 minutes in front of the Senate [during Trump’s impeachment trial on the Ukraine allegations] laying this whole thing out.

Now, as far as pardons, the Constitution [Article II, Section 2] says that the President “shall have power to grant reprieves and pardons for offenses against the United States, except in cases of impeachment.” There have been reports [in The New York Times and ABC] that Trump might want to pardon himself before he leaves office. If he were impeached, would the pardon then apply for the same crime that he was impeached for?

He could be pardoned for the crime, but not the impeachment.

So he would be allowed to pardon himself —

The final issue I want to ask about is that of Trump being banned on social media.

I don’t think there should be any banning on social media. I think that it violates the spirit and the culture of the First Amendment, and I think the best response to that is for people to use different social media. That’s why I have a podcast called The Dershow on Rumble — because Rumble doesn’t censor. It’s also on YouTube, but YouTube can take me down if I say something they don’t like. So I’m engaging in the marketplace of ideas and competition.

Trump tweeted on Friday, “To all of those who have asked, I will not be going to the Inauguration on January 20th.” When Twitter banned him later that day, one of the reasons it gave is that that tweet “is being received by a number of his supporters as further confirmation that the election was not legitimate and is seen as him disavowing his previous claim … that there would be an ‘orderly transition’ on January 20th.” Do you believe that the way something is received should be a factor in banning someone?

Of course not. And look, I wish he’d go to the inauguration; that would be my advice. But he’s certainly entitled not to go, and that is something that he should not be banned for. That’s pure, core political speech, as are his statements about the election, whether they’re true or false. The First Amendment doesn’t determine truth or falsity — it’s determined by the marketplace.

So the question of whether someone should be banned is only based on what his own intent was, and not on how people are taking it?

You’re asking the wrong person; I don’t think anything should be banned, except if it’s illegal.

Real incitement to violence should be banned?

This isn’t even close.

But if it were?

According to the definition of incitement, it’s almost impossible to have it in written form. It almost always has to be in verbal form, directly to a crowd. So I don’t even think the incitement exception would apply to Twitter or to YouTube.

What do you think about Twitter and Facebook and the Section 230 exemption [which provides immunity for website platforms from content published by third parties, from claims such as defamation]? Now that social-media sites have been censoring posts, critics say they are publishers, not platforms, and should no longer have the exemption.

I think it doesn’t apply to them. I think they’ve waived their exemption by becoming publishers rather than platforms.

So Congress would be justified in removing that exemption?

Not only would Congress be justified, but I think the courts would be justified in interpreting it not to apply to them.