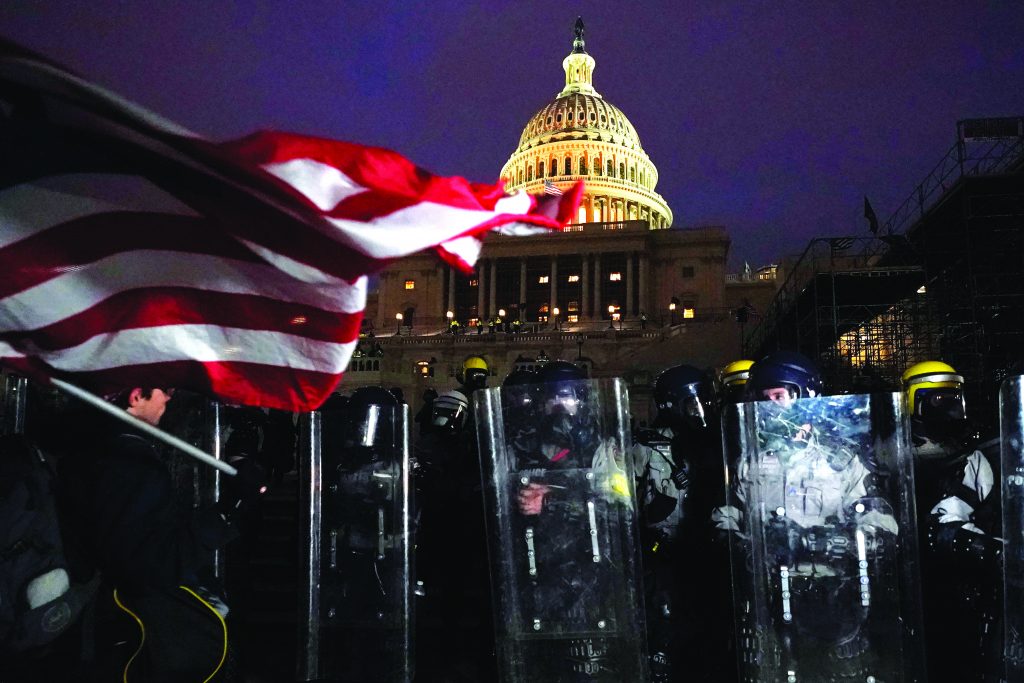 It was over in a day. Angst and frustration spilled into the streets of Washington last week and descended into chaos. The assault on the Capitol, with the ensuing bloodshed, will not only be recalled for its tragedy, but for the stain it leaves on the entire nation and for the unfortunate sullying of the protest and protesters in the process. And though the lawlessness was condemned by the right and the left, it will provide endless fodder for a mainstream media that will continue its assault on the 45th President long after he leaves.

As lawlessness is apt to do, it accomplished nothing other than play into the hands of those who exploit it. With President Trump advising the assaulting mob to stand down and later agreeing to a peaceful transition of power, the end remains the same — Biden is to become President. But it did nothing to clarify or deliver election integrity. And those who condemned the violence do not condone the alleged fraud or the Democratic misuse of electoral laws in those states where the Constitution was flouted.

What the debacle did highlight is the discrepancy between Republicans, who are horrified and censorious at what took place, and Democrats, who witnessed much worse and prolonged violence during the BLM riots yet demurred when it came to censuring it. To this day, some Democratic politicians still refuse to fully reproach the months of violence that left scores of people dead and business burned to the ground. Yet Republicans and right-wing pundits came out immediately en masse to slam the offenders. There was no defending them as a “movement,” as Biden had defended Antifa after the racial riots. A thug is a thug no matter which side he is on.

But the damage is done. Almost as soon as events were unfolding, claims of Antifa and other infiltrators, masquerading as Trump fans and participating in the violence, emerged. And Democrats and the left-wing media, who view this event as manna from heaven, won’t bother to report the difference. To them, the MAGA cap is even more taboo than ever. They won’t focus on infiltrators any more than they focused on burning and looting during the BLM riots.

Worse, the fiasco has created deep fissures within the Republican Party. Ironically, Trump, who began his four-year tenure as a polarizing force in his own party, only to assemble Republicans as they coalesced over his successful agenda and accomplishments, is now ending his term as a polarizing force. With Vice President Pence and other Republicans unwilling to take the electoral fight to the finish, a perhaps irreparable schism has developed within their own ranks.

The dangers of last week’s fateful day reach far beyond scaling the Capitol wall and breaching its doors. While everyone denounces the lawbreakers, killing the messenger risks killing the message too. Because no matter what side they took, Republicans are now on the defensive. And a divided defensive at that.

This threat to conservative policies couldn’t come at a more dire time. The mayhem that surrounded the events of January 6 and the Electoral College vote count seemed to totally eclipse the events of January 5 and Georgia’s Senate runoff elections. Yet the import of the elections will linger long after the uproar of the following day’s count.

The consequences of the Democratic victories in Georgia cannot be overstated. The Democrats, essentially in control of all three branches of government, can now enact laws that Republicans warned against when they urged voters to show up and vote.

That urging was apparently not enough. Adding states, ending the filibuster and packing the courts may no longer be the stuff of fearmongers. They might become reality. And after AOC recently hinted in very non-oblique fashion that she might challenge Senator Chuck Schumer for his seat in the next Senate election, Schumer, who is poised to become majority leader, must be salivating at the chance to enact leftist policies in order to keep her at bay.

It will now be easier to promote those leftist policies. Rev. Raphael Warnock and Jon Ossoff emerged victorious in Georgia’s elections, despite their clinging to a progressive agenda in a once solidly red Southern state. In the case of Rev. Warnock, his victory defied charges of personal offenses and an open and long history of anti-Israel rhetoric. Even his position on Roe v. Wade, which he seems to consider a starting point, and which was opposed by other Black pastors, didn’t stand in the way.

While we can draw some solace from the failure of leftist Democrats to gain more inroads in Congressional contests around the country, Georgia’s runoff elections demonstrate that the threat is not to be dismissed.

On the contrary, now that Democrats control Washington, we can expect to see enthusiastic support for wealth redistribution, universal healthcare, climate control, immigration reform, reparations, the teaching of Critical Race Theory, etc. — policies that will only further undermine and promote the erasure of conservative values.

This threat to conservative values is now undermined even further by the schism in conservatives’ own ranks. And the hopes of winning over some moderate Democrats, like Senator Joe Manchin of West Virginia, to halt the spread of progressive policies, might at this point be counterbalanced by the willingness of some Republicans, in an effort to project conciliation in the face of the recent fiasco, to cross the aisle as well.

With the presidential inauguration one week away, time is winding down toward a Trump denouement.

And it remains to be seen just how many of his achievements will be unraveled to the detriment of the United States of America and the rest of the world.

It is now more important than ever for conservatives to avoid descending into a battleground of allegiances rather than uniting over ideas and policies. Though misery loves company, the divided opposition between hard left and the Democratic establishment should only serve to warn Republicans of the threats of disunity. There is too much at stake.