Representative Cheney Says She Will Vote to Impeach Trump 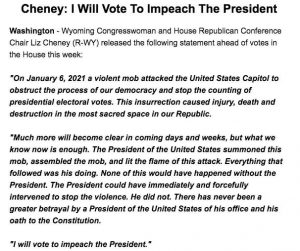 Representative Liz Cheney, who holds a high-ranking position in Republican leadership in the House of Representatives, on Tuesday said that she will vote to impeach President Donald Trump.

In a statement noting that Trump “summoned this mob, assembled the mob, and lit the flame of this attack” on the U.S. Capitol on Jan. 6, Cheney said, “I will vote to impeach the president.”