In a letter to Speaker of the House Pelosi, Vice President Mike Pence spelled out why he feels the 25th amendment does not apply concerning President Trump, and suggested it is time to heal the nation rather than inflame the passions of the moment. 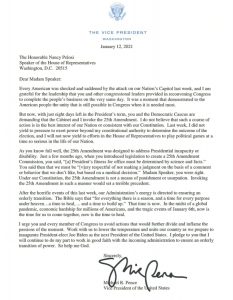 Vice President Pence explained that in his opinion, the 25th amendment was designed to address a president who was incapacitated or disabled, and reminded Speaker Pelosi that she had recently expressed that the decision to invoke it must be “determined by science and facts,” and not “on the basis of a comment or behavior that we don’t like, but based on a medical decision.”

The Vice President wrote that last week he did not yield to pressure to exert power beyond his constitutional authority, and he “would not now yield to efforts in the House of Representatives to play political games at a time so serious in the life of our Nation.”

The Vice President’s letter ended with his request to avoid further divisions and to unite the country as the inauguration approaches.