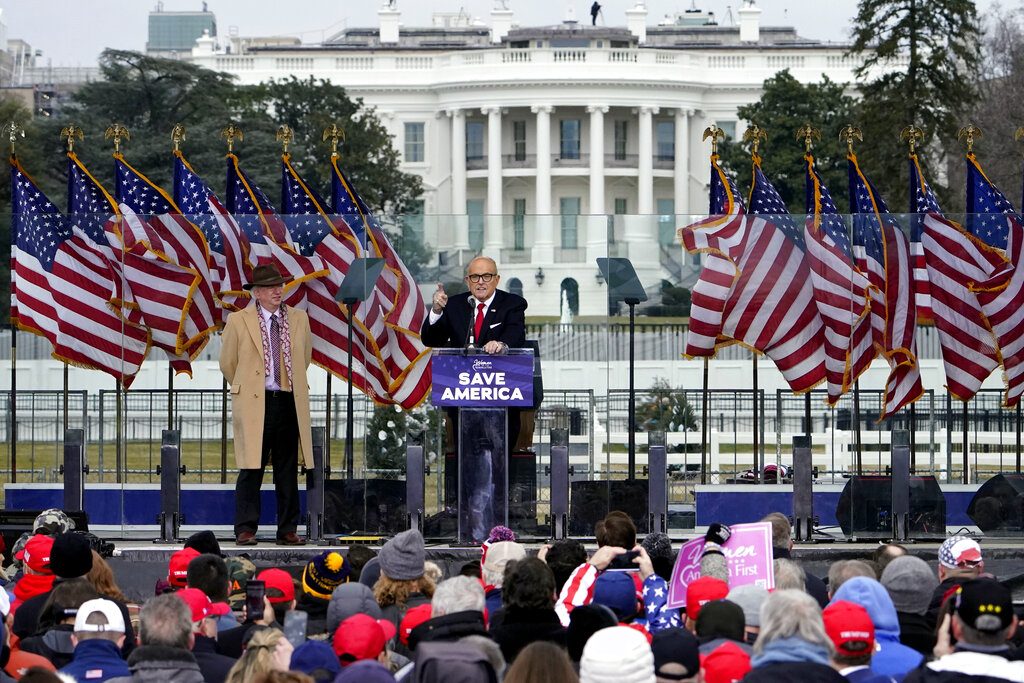 Rudy Giuliani is facing possible expulsion from the New York State Bar Association over remarks he made to President Donald Trump’s supporters last week before they violently stormed the U.S. Capitol.

The organization said Monday that it has opened an inquiry into whether Giuliani should remain a member. Its bylaws state that “no person who advocates the overthrow of the government of the United States” shall remain a member. Removal from the bar association, a voluntary membership organization dating to 1876, is not the same as being disbarred and banned from practicing law. That can only be done by the courts.

A message seeking comment was left with Giuliani’s spokesperson. The bar association said he will be afforded due process and be given a chance to explain and defend his words and actions.

State Sen. Brad Hoylman, a Democrat, separately made an official complaint on Monday to the state’s courts, asking that disbarring Giuliani be taken up for consideration.

Giuliani, the former mayor of New York City, is Trump’s personal lawyer and has played a prominent role in the Republican president’s failed fight to overturn his election loss to President-elect Joe Biden, a Democrat.

“If we’re wrong, we will be made fools of, but if we’re right, a lot of them will go to jail,” Giuliani told the crowd. “Let’s have trial by combat.”

Among the people calling for the bar association to remove Giuliani were U.S. Reps. Mondaire Jones, D-N.Y., and Ted Lieu, D-Calif., who sent a letter to the organization last week saying that his actions were “absolutely disqualifying from remaining in good standing.”

In a statement Monday, Jones said “Giuliani is an embarrassment to attorneys everywhere” and called on the state’s courts to disbar him to ensure that he will “never again use his law degree to destroy lives and undermine our democracy.”

The bar association said in a statement that Giuliani’s words “quite clearly were intended to encourage Trump supporters unhappy with the election’s outcome to take matters into their own hands.” The group condemned the violence at the Capitol, calling it “nothing short of an attempted coup, intended to prevent the peaceful transition of power.”

The bar association isn’t the only organization reconsidering its ties to Giuliani.

Middlebury College in Vermont said Sunday it is weighing whether to revoke an honorary degree given in 2005 in recognition of Giuliani’s leadership during the 9/11 attack.