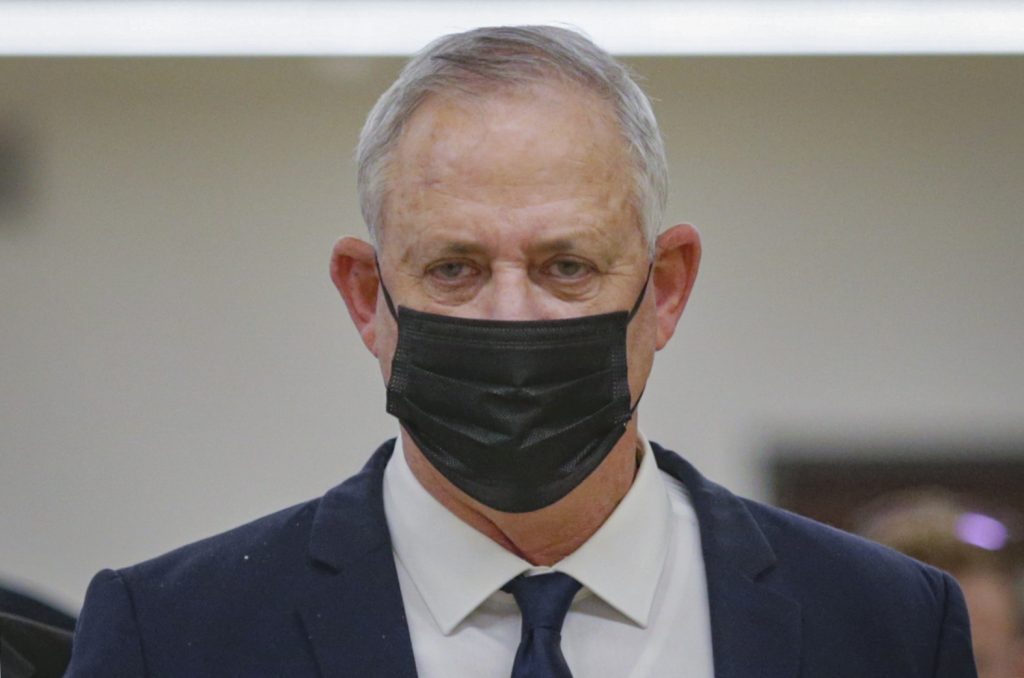 Benny Gantz said he made a mistake in joining Prime Minister Binyamin Netanyahu‏‏’s now-defunct coalition, and said on Monday he wants to rebuild the center-left alliance that he once presided over to oust Netanyahu.

“Three times, we were close to ensuring that he’d end [his job],” Gantz says at a press conference. But when the coronavirus broke out, “I, a soldier of the State of Israel, stood forward. I shook the hand of this man I had promised to replace. I shook the hand of a serial promise-breaker. I shook it because Israel was at war and I am first and foremost its soldier.

“I was wrong,” he said. “You who believed in me were disappointed.”

And while the country was ravaged by the pandemic and the economic crisis it caused, he said, Netanyahu continued “to incite and divide, simply because it serves his personal interests, and to allow him to escape the courthouse… He deceived me, he deceived you, he deceived one too many times. Now he must pay.”

“This is an hour of emergency. We cannot let [Netanyahu] smash us into slivers of parties,” he said.

If any such alliance can be forged, Gantz will almost certainly not be at the head of it. Thousands of his supporters felt betrayed when he broke away from Yesh Atid-Telem to join Netanyahu, where his Blue and White Party sunk in the polls from 15 seats to five or six, as the government’s handling of the pandemic proved faulty amid constant coalition infighting.

Channel 12 said on Monday that Yesh Atid, which is projected to be the largest of those parties (at around 15 seats), is unlikely to agree to such an alliance, nor would Meretz.

Yesh Atid put out a statement in response: “We will make every effort to form alliances that will lead to a sane, liberal government that will change the country.” Party leader Yair Lapid has in the past said he would be open work with Gantz again, but only if he, Lapid, heads the slate, The Times of Israel said.

“We had a chance to replace Netanyahu,” he tweeted. “But you chose to be a ‘reserve prime minister.’ The only thing you can do now for the country is to announce you’re not running for the next Knesset.”

Meanwhile, on the right, Naftali Bennett’s Yamina party was shaking off the Religious Zionist party of Bezalel Smotrich.

Smotrich, who ran last year under the Yamina banner, will attempt to go it alone this time. He told Channel 12 on Monday evening that “Naftali Bennett and I are splitting, each to his own path.

Yamina responded that “Smotrich chose tonight to split the Right.”

In an interview with Radio 103FM, Smotrich gave his version of events: “Unfortunately, Naftali made a decision again to leave Religious Zionism and go it alone. He went on this adventure in the first round. The result is known, he did not pass the electoral threshold, threw away almost four seats for the Right and to this day, two years later, we have yet to recover from this mistake. Now he goes out and sniffs the polls again.

“This is a pattern: last time he also started with 16 seats and did not pass, and this time he starts with 14. I very much hope for all of us that he will pass the electoral threshold, but we are not waiting. Religious Zionism is alive and kicking. There has been a Religious Zionist party since the establishment of the state and there will continue to be one. It is a party that is the compass and conscience of any government that would be formed.”