New York City Mayor Bill de Blasio on Monday reiterated his and the NYPD’s commitment to protecting the Jewish community, as the city continues to suffer from significant numbers of anti-Semitic hate crimes.

Asked about the high number of anti-Semitic crimes at his press conference Monday, the mayor replied,

“The hate crimes against the Jewish community are absolutely unacceptable. I’ve said repeatedly, the only way to address them is a combination of clear consequences for the perpetrators and more and more education against anti-Semitism. We’ll keep doing those two things, but whatever combination of tools we need we’re going to use them because we will not allow hate crimes against the Jewish community in this city.” 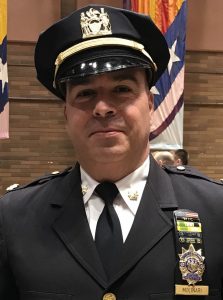 “Sad to learn that we are losing Inspector Mark Molinari as the commanding officer of @NYPDHateCrimes. He has been an exemplary, knowledgeable, and accessible leader at a time when hate crimes have reached unprecedented highs,” Deutsch wrote. “I wish the Inspector success at his new role in the NYPD. I look forward to a continued strong partnership of transparency and sensitivity with his successor.”

Neither Molinari’s successor, nor Molinari’s new role, have officially been announced by the NYPD, but multiple sources told Hamodia that Molinari is being promoted to  Commanding Officer of the Staten Island Detective Bureau.