No Injuries After Shooting in Crown Heights 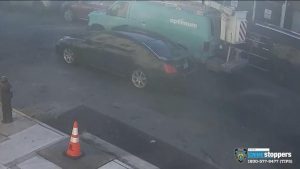 The New York City Police Department is searching for an unknown man who opened fire from his car in the middle of Crown Heights before fleeing.

At 10:23 a.m. Thursday, police say, the driver of a black Nissan sedan fired multiple shots “in the direction of a vehicle that was double parked” in front of 781 Eastern Parkway, near Kingston Avenue. The Nissan fled northbound on Kingston Avenue.

Gadi Hershkop, a member of Crown Heights Shomrim, told Hamodia that it was a “miracle” no one was hurt, noting the incident took place in the middle of the day, across the street from Chabad world headquarters at 770 Eastern Parkway.

Surveillance video below, taken near Park Place and Schenectady Avenue, captured images of the sedan.