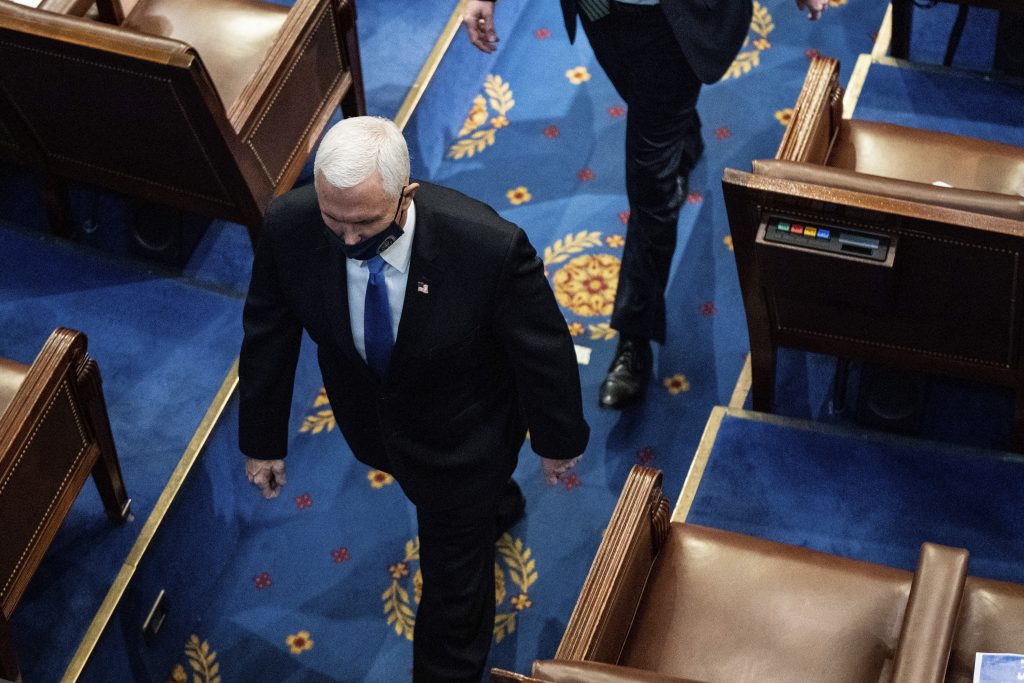 They were never a natural fit, the straight-laced evangelical and the brash reality TV star. But for more than four years, President Donald Trump and Vice President Mike Pence made their marriage of political convenience work.

Now, in the last days of their administration, each is feeling betrayed by the other. It’s part of the fallout from an extraordinary 24-hour stretch in which Pence openly defied Trump, Trump unleashed his fury on the vice president, and a mob of violent supporters incensed by Trump’s rhetoric stormed the Capitol building and tried to halt the peaceful transfer of power.

The Trump-Pence relationship is “pretty raw right now,” said one top GOP congressional aide, who described multiple phone calls in which Trump berated Pence and tried to pressure the vice president to use powers he does not possess to try to overturn the results of the 2020 election. Pence, for his part, was left feeling “hurt” and “upset” by the episode, according to people close to him. They spoke on condition of anonymity to discuss internal matters.

Pence’s decision to publicly defy Trump was a first for the notoriously deferential vice president, who has been unflinchingly loyal to Trump since joining the GOP ticket in 2016. Pence has spent his tenure defending the president’s actions, trying to soothe anxious world leaders put off by Trump’s caustic rhetoric, and carefully avoiding the president’s ire.

He has taken on some of the administration’s most high-pressure projects, including leading its response to the coronavirus. And he has stood by Trump even as the president leveled allegations of voter fraud and refused to concede the election after his loss to Democrat Joe Biden.

Under normal circumstances, the vote-tallying procedure that began on Wednesday would have been a mere formality. But after losing court case after court case, and with no further options at hand, Trump and his allies zeroed in on the congressional tally as their last chance to try to challenge the race’s outcome.

In a bizarre interpretation of the law, they argued that the vice president had the unilateral power to reject Electoral College votes supporting Biden. The Constitution makes clear that only Congress has that power.

The effort effectively turned Pence into a scapegoat who could be blamed for Trump’s loss if the vice president refused to go along with the plan. Trump and his lawyers spent days engaged in an aggressive pressure campaign to force Pence to bend to their will in a series of phone calls and in-person meetings, including one that stretched for hours on Tuesday.

When Pence, who consulted with his own legal team, constitutional scholars and the Senate parliamentarian, informed Trump on Wednesday morning that he would not be going along with the effort, the president “blew a gasket,” in the words of one person briefed on the conversation.

Not long after, Trump took the stage in front of thousands of his supporters at a “Stop the Steal” rally, where he urged them to march to the Capitol and continued to fan false hopes that Pence could change the outcome.

“If Mike Pence does the right thing we win the election,” Trump insisted. He repeatedly returned to Pence throughout his speech as he tried to pressure the vice president to fall in line.

But Trump already knew what Pence intended. And as Trump spoke, Pence released a letter to Congress laying out his conclusion that a vice president cannot claim “unilateral authority” to reject states’ electoral votes. He soon gaveled into order the joint session of Congress where his and Trump’s defeat would be cemented.

Not long after that, members of Trump’s rally crowd arrived at the Capitol, where they overwhelmed police, smashed windows, occupied the building and halted the electoral proceedings. Pence was whisked from the Senate chamber to a secure location, where he was held for hours with staff as well as his wife and daughter, who had been there to support him.

Trump did not call to check in on his vice president’s safety during the ordeal and instead spent much of Wednesday consumed with anger over Pence’s action, tweeting, “Mike Pence didn’t have the courage to do what should have been done to protect our Country and our Constitution.”

Later, members of the mob outside the Capitol were captured on video chanting, “Hang Mike Pence!”

For allies of Pence, it was a deeply upsetting episode that put the vice president in danger after four years of unstinting loyalty to the president and left Pence himself feeling hurt.

“I just think he’s had enough,” said John Thompson, who served as Pence’s campaign spokesman and also worked for the Republican Governors’ Association.

“Yesterday just really pulled on his heartstrings,” Thompson said. “He’s been this loyal individual and the president was asking him to break the law and act outside his constitutional duties. I think it just reached a boiling point and the vice president said, ‘I’ve had enough.'”

“He said, ‘After all the things I’ve done for (Trump),'” Inhofe added.

Former House Speaker Newt Gingrich, an informal Trump adviser, also came to Pence’s defense, tweeting that his action was “a profile in courage.”

It remains unclear how the dynamic between Trump and Pence will play out over the next two weeks and how long the president will hold his grudge. The White House declined to discuss Trump’s thinking, but allies said Pence intends to spend the next two weeks focused on the transition.

He is also expected to attend Biden’s inauguration.

And while Pence had been banking on his close relationship with the president to propel him to top-tier status if he decides to run for president in 2024, allies said they didn’t think the vice president’s actions this week would have long-term consequences, even if some voters blame him for Trump’s defeat.

“I thought that was a very courageous moment for him,” Thompson said. “And I think that’s going to help his future.”