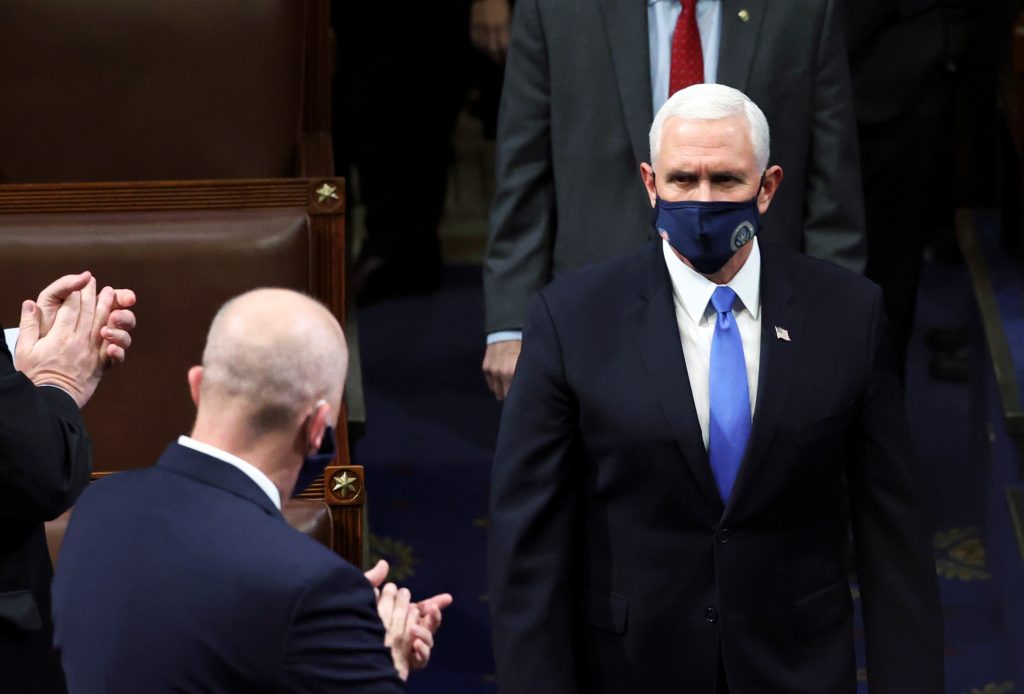 Hundreds of President Donald Trump’s supporters stormed the Capitol on Wednesday in a stunning bid to overturn his election defeat, battling police in the hallways and delaying the certification of President-elect Joe Biden‘s victory for hours.

In the gravest assault on the symbol of American democracy in more than 200 years, rioters forced their way past metal security barricades, broke windows and scaled walls to fight their way into the Capitol.

Hours later, both houses of Congress resumed their work on certifying Biden‘s Electoral College win, with debate stretching into the early hours of Thursday. It quickly became clear that objections from pro-Trump Republican lawmakers to Biden‘s victory in battleground states would be rejected overwhelmingly, including by many Republicans.

“To those who wreaked havoc in our Capitol today – you did not win,” Vice President Mike Pence, who presided over the session, said as it resumed. “Let’s get back to work,” he said.

Police said four people died during the chaos on Wednesday – one from gunshot wounds and three from medical emergencies – and 52 people were arrested.

Some besieged the House of Representatives chamber while lawmakers were inside, banging on its doors and forcing suspension of the certification debate. Security officers piled furniture against the chamber’s door and drew their pistols before helping lawmakers and others escape.

Police struggled for more than three hours after the invasion to clear the Capitol of Trump supporters before declaring the building secure shortly after 5:30 p.m.

The assault on the Capitol was the culmination of months of divisive and escalating rhetoric around the Nov. 3 election, with Trump repeatedly making claims that the vote was rigged and urging his supporters to help him overturn his loss.

The chaos unfolded after Trump – who before the election refused to commit to a peaceful transfer of power if he lost – addressed thousands of supporters near the White House and told them to march on the Capitol to express their anger at the voting process.

He told his supporters to pressure their elected officials to reject the results, urging them “to fight.”

Some prominent Republicans in Congress strongly criticized Trump, putting the blame for the day’s violence squarely on his shoulders.

A source familiar with the situation said there have been discussions among some Cabinet members and Trump allies about invoking the 25th Amendment, which would allow a majority of the Cabinet to declare Trump unable to perform his duties, making Pence the acting president. A second source familiar with the effort doubted it would go anywhere with Trump having just two more weeks in office.

Senate Republican leader Mitch McConnell, who had remained silent while Trump has sought to overturn the election result, called the invasion a “failed insurrection” and promised that “we will not bow to lawlessness or intimidation.”

“We are back in our posts. We will discharge our duty under the Constitution, and for our nation. And we are going to do it tonight,” he said.

The shock of the assault on the Capitol seemed to soften the resolve of some Republicans who had supported Trump’s efforts to convince Americans of his baseless claims of fraud.

Senator Lindsey Graham, one of Trump’s staunchest allies in Congress, rejected an effort by his fellow Republicans to object to election results in hopes of setting up a commission to investigate Trump’s unsubstantiated allegations of election fraud.

“All I can say is count me out. Enough is enough,” Graham said on the floor of the Senate. “Joe Biden and Kamala Harris are lawfully elected and will become the president and the vice president of the United States on Jan. 20.”

The Senate rejected by a 93-6 vote Republican objections to the certification of Biden‘s victory in the battleground state of Arizona, ensuring their defeat. The House of Representatives, controlled by Democrats, also rejected the move by a 303-121 vote.

The Senate also rejected an objection to the certification in Pennsylvania on a 92-7 vote. The House rejected that objection, expected to be the final one debated, as well by a 282-138 tally.

It was the most damaging attack on the iconic building since the British army burned it in 1814, according to the U.S. Capitol Historical Society.

Biden said the activity of the protesters “borders on sedition.”

In a video posted on social media while the rioters roamed the Capitol, Trump repeated his claims about election fraud but urged the protesters to leave.

“You have to go home now, we have to have peace,” he said, adding, “We love you. You’re very special.”

Twitter later restricted users from retweeting Trump’s video, and Facebook took it down entirely, citing the risk of violence.

Twitter said later it had locked the account of Trump for 12 hours over “repeated and severe violations” of the social media platform’s “civic integrity” rules and threatened permanent suspension.

Election officials of both parties and independent observers have said there was no significant fraud in the Nov. 3 contest, in which Biden won seven million more votes than Trump.

Weeks have passed since the states completed certifying that Biden won in the Electoral College, which decides presidential elections, by a 306-232 vote. Trump’s challenges to Biden‘s victory have been rejected by courts across the country.

Trump had pressed Pence to throw out election results in states the president narrowly lost, although Pence has no authority to do so. Pence said in a statement he could not accept or reject electoral votes unilaterally.