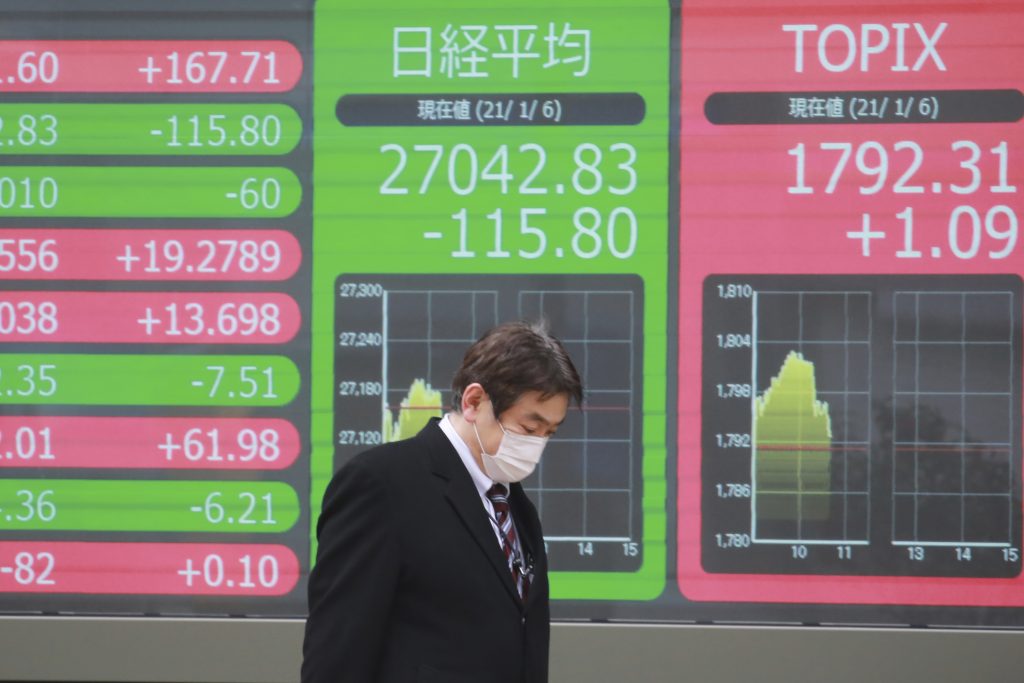 World shares were mixed and U.S. futures declined Wednesday as investors awaited full results of a Senate runoff election that will determine whether Democrats take control of both houses of the U.S. Congress.

Benchmarks edged higher in Europe. Shares traded lower for most of the day in Asia, although markets in Hong Kong and Shanghai ended higher.

Traders are focusing on the outcome of the runoff elections in Georgia Tuesday, which will determine which party controls the Senate. Some analysts say the results could mark clear winners and losers in the stock market.

The expectation is that a Democratic sweep might lead to higher tax rates, tougher regulation on businesses and other potentially profit-crimping changes from Washington. That would put broad pressure on the stock market, with Big Tech stocks in particular perhaps attracting more regulatory scrutiny.

U.S. futures were lower on Wednesday, with the contract for the S&P 500 down 0.7% and the future for the Dow industrials 0.1% lower after Democrat Raphael Warnock won one of the two Senate runoffs, becoming the first Black senator in his state’s history and putting the Senate majority within the party’s reach.

The outcome of the race between Republican David Perdue and Democrat Jon Ossoff was too early and close to call as votes were still being counted.

Democratic control of the Senate, White House and House of Representatives would likely make another dose of big financial support for the U.S. economy more likely.

Such stimulus could eventually set off higher inflation across the economy. Such expectations pushed Treasury yields higher. The yield on the 10-year Treasury rose to 1% on Wednesday from 0.95% Tuesday and 0.90% late Monday.

During Asian trading, Hong Kong shares yoyo’d after authorities arrested dozens of pro-democracy figures, including former lawmakers for allegedly violating a national security law by participating in an unofficial primary election last year held to increase their chances of controlling the legislature.

Investors were weighing the potential impact of an executive order from President Donald Trump banning transactions with eight Chinese apps including Alipay and WeChat Pay in an escalation of a trade war he has been waging through most of his term. The order takes effect in 45 days, when Joe Biden will be president.

Alipay is a widely used digital wallet that is part of the empire of e-commerce billionaire and Ant Group founder Jack Ma. WeChat Pay is a rival service operated by tech giant Tencent. The others named in the order are CamScanner, QQ Wallet, SHAREit, Tencent QQ, VMate and WPS Office.

Investors remain optimistic that the U.S. economy will bounce back this year as more Americans receive coronavirus vaccinations. But surging infections around the world are bringing fresh lockdown orders, undermining confidence that support from central banks and governments can keep economies afloat until mass injections of COVID-19 vaccines can drive broader recoveries.

In other trading, benchmark U.S. crude oil gained 8 cents to $50.01 per barrel in electronic trading on the New York Mercantile Exchange. It surged 4.9% on Tuesday.

Brent crude, the international standard, picked up 35 cents to $53.93 per barrel.