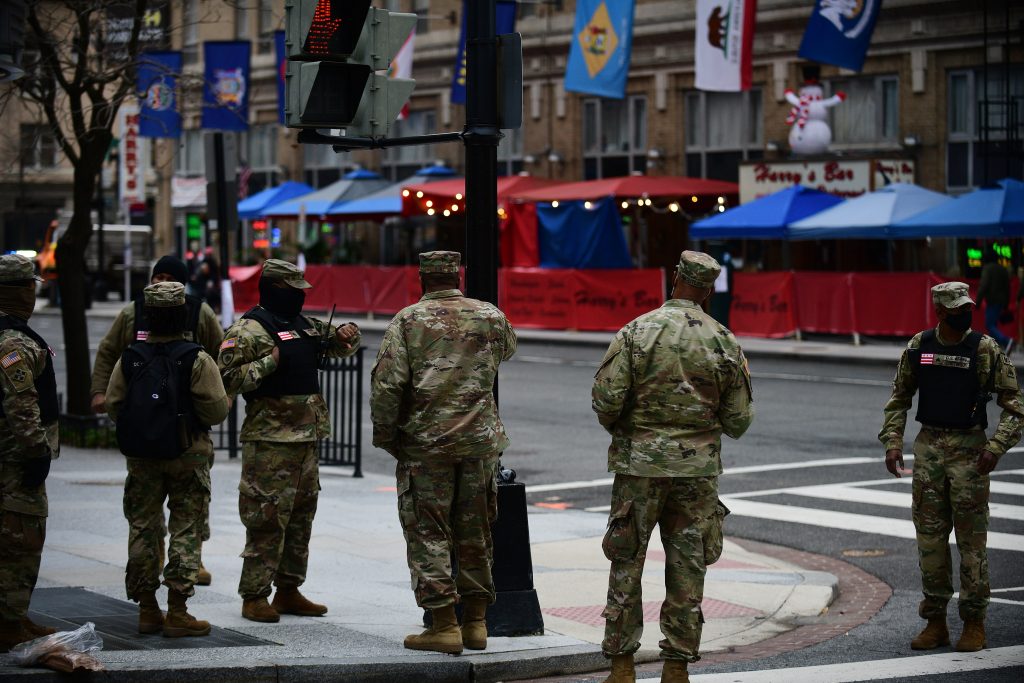 One day before Congress votes to certify the electoral college, Trump supporters have begun demonstrating in Washington again. The city is bracing for 48 hours of potentially violent protests, egged on by President Donald Trump himself.

The National Park Service updated the permit for one Wednesday gathering to 30,000 people, but multiple events planned for Tuesday are already drawing crowds downtown. Among the masses: the far-right groups whose members were involved in stabbings and the vandalism of historic Black churches in the District during last month’s protest.

The city has mobilized the National Guard alongside its police force, which will focus on arresting anyone who is unlawfully armed. The mayor has asked residents to avoid the demonstrations, which will take place at Freedom Plaza, the Capitol and the Supreme Court Tuesday.

Protesters have traveled across the country to be here for what they see as a last stand for Trump, who has continued to assert that the election was stolen from him. He has promoted Wednesday’s demonstrations for weeks, and said he is planning to make an appearance.

By 2 p.m., hundreds of people were gathered in Freedom Plaza, waving flags and listening to speeches, offered prayers and shared discount codes for MyPillow, a company owned by a Trump ally. Some donned flack jackets with walkie talkies and camouflage fanny packs strapped around their waists.

Speakers praised the lack of masks, saying the demonstrators were exercising their personal freedoms.

Masks are required outdoors in the District, but police are not enforcing the mandate this weekend, even as a winter surge of coronavirus worsens.

The city is averaging 233 new coronavirus cases daily, and hospitalizations are up 12% compared to last week. On Friday, the Washington region set a daily record for new coronavirus infections.

Though many officials have said Trump should stop attempting to overturn the results of the election, his refusal to do so has energized his followers. They have journeyed by car, bus and plane to rally alongside his most prominent divisive allies, including his personal attorney Rudy Giuliani, campaign advisor Roger Stone, and far-right conspiracy theorist Alex Jones.

Jones, who has been banned from multiple major social media platforms for spreading misinformation about politicians, school shootings and the Sept. 11 terrorist attacks, told supporters on his Parler account, “Trump wants to see you in D.C.”

On Parler and the encrypted messaging app Telegram, right-wing groups have openly discussed how to sneak guns into the District, where there are laws banning open carry and prohibiting firearms on federal lands and near protests.

When the leader of the Proud Boys, Enrique Tarrio, returned to the District for this week’s events, he was arrested. D.C. police took him into custody Monday afternoon on a warrant charging him with burning a Black Lives Matter banner taken from Asbury United Methodist Church during the December demonstration.

Dustin Sternbeck, a D.C. police spokesman, said Tarrio was charged with one misdemeanor count of destruction of property and two felony counts of possession of high-capacity ammunition feeding devices, which is a legal term for a magazine that allows guns to hold additional bullets. The devices were found during the arrest, police said.

As the rallies got underway Tuesday, Tarrio was set to appear in D.C. Superior Court.