Regional To Urge Speed, NY Hospitals Will Now Have to Vaccinate Within 7 Days or Face Fine
CoronavirusRegional 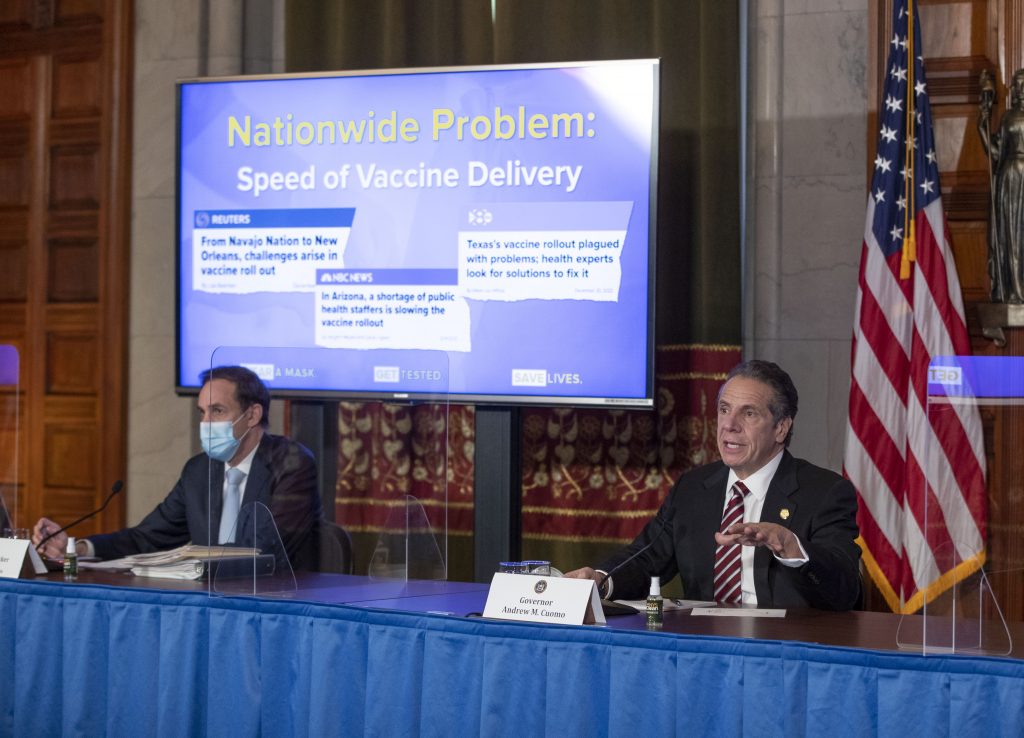 Amidst mounting criticism for the state’s slow vaccination pace as cases rise, Governor Andrew Cuomo announced that hospitals will be expected to use their allocation of vaccine vials within 7 days, or face a fine starting at a hundred thousand dollars.

He stressed his point by publicly listing New York’s 24 public and 170 private hospitals according to how speedily they distributed the vaccines.

New York-Presbyterian Healthcare System ranked highest, with 99% of vaccines distributed within 7 days, while New York City’s Health + Hospitals system was one of the lowest, at 31%.

He underscored his criticism of New York City’s mismanagement by pulling up a large photo of Mayor Bill de Blasio with a bright red banner that said “MUST MANAGE” as Cuomo said, “we need public officials to manage those hospitals…I need them to take personal responsibility for their hospitals.”

Dr. Howard Zucker, the State’s Commissioner of Health, added that “There needs to be a sense of urgency” in New York City, noting that of 38,000 vaccines allocated for healthcare workers, only 12,000 were distributed.

Cuomo did note that the burden of vaccination was heavy on a local level, and said that the state would be stepping in where federal programs and local initiatives were overstretched.

The state will now be stepping in to vaccinate nursing homes, as a federal program in conjunction with pharmacy chains Walgreens and CVS have not been vaccinating speedily enough.

“[The] goal is, over the next two weeks, all the nursing home residents vaccinated, and simultaneously we’re doing the staff” said Cuomo. “The federal program has not worked as quickly as we would have liked. We’re going to step in and make it work.”

The state is speeding up the vaccination process in a race against the virus. Since Thanksgiving and winter travel and family gatherings, cases have soared throughout the country.

The state currently has 8,251 patients hospitalized with the coronavirus, the statewide positivity rate is 8.43%. “Number of statewide deaths is up to 170,” said Cuomo. “That is a terrible way to start the New Year.”