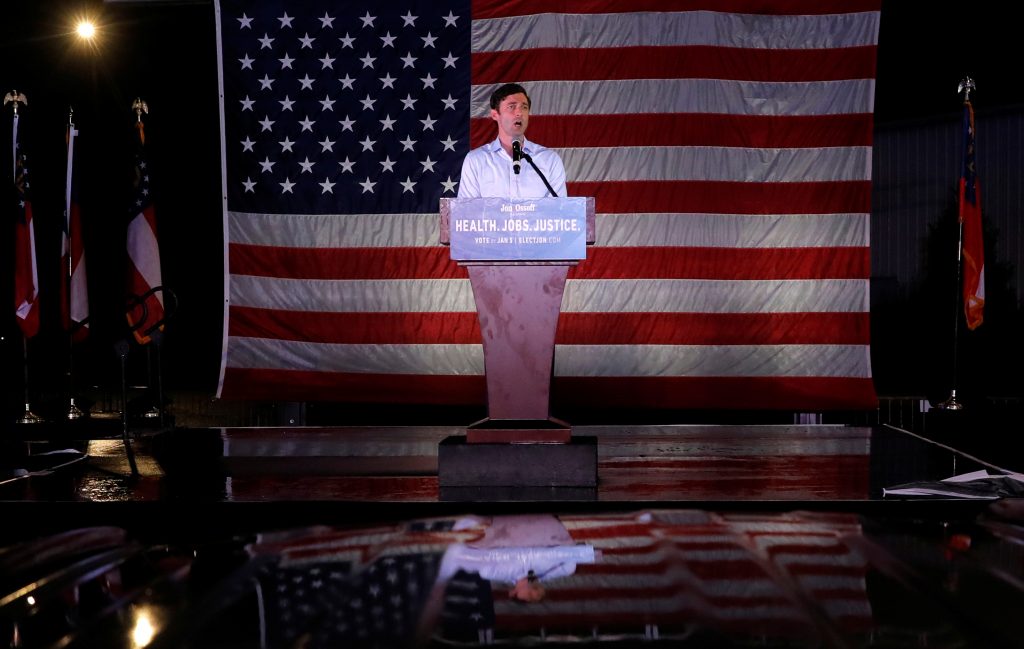 Control of the Senate – and with it, the likely fate of President-elect Joe Biden‘s legislative agenda – will be on the ballot on Tuesday when voters in Georgia decide twin runoff elections.

The high-stakes campaign has obliterated spending records and spurred unprecedented turnout. Political groups have flooded the southern state with a tsunami of television advertising.

Both Biden, a Democrat, and Trump, a Republican, will visit on Monday, underscoring the political stakes of the contests.

If either or both Republican incumbent senators – David Perdue and Kelly Loeffler – win on Tuesday, their party would retain a narrow majority, effectively giving Senate Republicans veto power over Biden‘s most ambitious goals. A Democratic sweep would produce a 50-50 split, with Vice President-elect Kamala Harris holding the tiebreaker that determines control.

Democrat Jon Ossoff is challenging Perdue, while the Rev. Raphael Warnock will take on Loeffler.

Biden‘s narrow Georgia victory in November – the first in a generation for a Democratic presidential candidate – completed the state’s shift from a Republican stronghold to a fiercely competitive battleground.

The Jan. 5 head-to-head runoffs were triggered when no candidate reached 50% in either race in November. Polls suggest the contests are virtual dead heats. Early voting has shattered runoff records, with 3 million ballots already cast.

Black turnout, critical to the Democrats’ chances, has been robust; about one-third of the ballots have come from self-identified Black voters, up from around 27% in November.

“Democrats need to see an electorate like this in order to be able to win the election,” McDonald said. But he said it was impossible to predict the final outcome, cautioning that Republicans could turn out in higher numbers on Election Day.

Bobby Jenkins, the Democratic chair in rural Randolph County, said he felt good about his county’s high early voting figures after an aggressive door-to-door push to get out the Black vote.

“It’s going to hinge on how many Republicans turn out on Election Day,” he said.

The races have drawn a staggering $490 million in ad spending, according to the tracking firm AdImpact. Biden‘s political team has directed at least $18 million to the Democratic effort, according to a person familiar with the matter, including staff, data support and fundraising.

If close, the results could remain unclear for days as ballots are counted, and legal challenges could prolong the process. Biden‘s 12,000-vote victory took more than a week to confirm, and two recounts pushed the state’s final certification into December.

Biden will rally alongside Ossoff and Warnock in Atlanta on Monday, while Vice President-elect Kamala Harris will campaign in Savannah on Sunday.

Trump, meanwhile, will visit heavily Republican Whitfield County in northwestern Georgia on Monday. But the president’s insistence that his loss was due to fraud has some Republicans concerned that his most ardent supporters may stay home, convinced the vote is rigged.

Loeffler and Perdue have struck an awkward balance, supporting Trump’s accusations even as they warn that they represent a “firewall” against a Democratic takeover. They have portrayed their opponents as radical socialists.

Ossoff and Warnock have accused the Republicans of downplaying the pandemic while profiting off it by quietly selling stock. Investigations have not led to any charges, and both Perdue and Loeffler said they did not personally direct the sales.

Perdue has been absent from the campaign’s closing days after being exposed to someone infected with the coronavirus. The Republicans have planned an election night party in Atlanta, while the Democrats have eschewed an in-person event due to the pandemic.