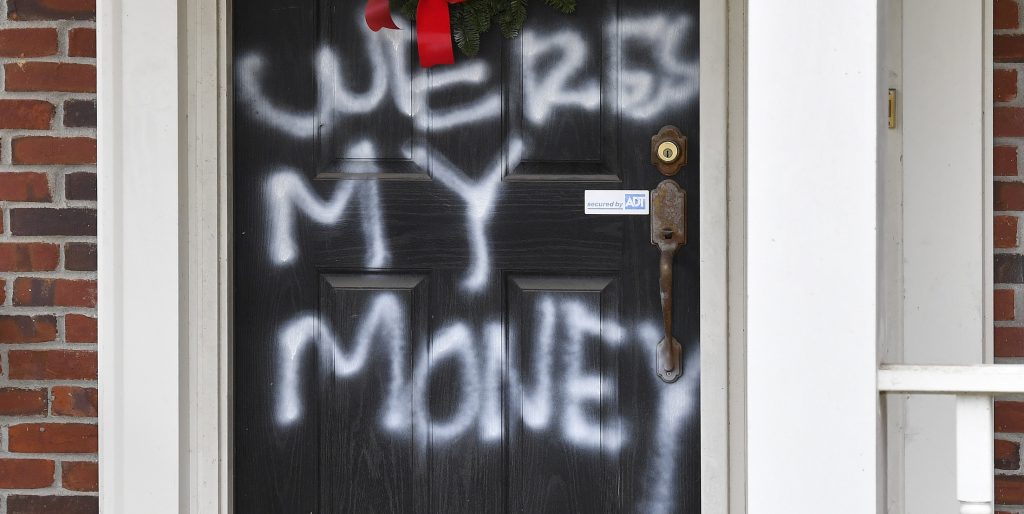 Vandals went on a spray-painting spree at the homes of Congress’ top two leaders in separate graffiti blitzes that appeared to target Capitol Hill’s failure to send out fatter stimulus checks.

The Louisville, Kentucky, home of GOP Senate Majority Leader Mitch McConnell and San Francisco residence of Democratic House Speaker Nancy Pelosi were both splatted with angry messaging — and at Pelosi’s home, a severed pig’s head, according to reports.

On Saturday morning, a misspelled “where’s my money” and expletives were splashed across the front door and bricks of McConnell’s residence, the Courier-Journal reported.

McConnell condemned the defacement as a “radical tantrum.”

“I’ve spent my career fighting for the First Amendment and defending peaceful protest. I appreciate every Kentuckian who has engaged in the democratic process whether they agree with me or not,” McConnell said .

“This is different. Vandalism and the politics of fear have no place in our society,” he said, adding he has “never been been intimidated by this toxic playbook. We just hope our neighbors in Louisville aren’t too inconvenienced by this radical tantrum.”

Around 2 a.m. Friday, vandals painted “Cancel rent” and “We want everything” and then left a a severed pig’s head in a pool of red paint in front of her garage, the news outlet reported.

“I don’t think that this is a useful way to go about it and it’s a terrible start to this new year, when we are hoping for less anger and hatred than we’ve had to deal with for the last year,” Pelosi neighbor Audrey Carlson told KPIX.

Pelosi, who helped spearhead passage of a bill to increase $600 stimulus checks to $2,000, was in Washington, D.C., at the time of the spree.

But on Saturday, McConnell wouldn’t allow a vote on the proposed hike in direct cash payments to American households that qualify, called the CASH Act.

Uncle Sam has already started sending out the $600 stimulus checks that Congress approved on Dec. 21, and which President Donald Trump signed last week.

In the long-shot chance a deal to increase payments to $2,000 is reached, the IRS has said it would send another payment for the additional amount to anyone who already received a $600 check.