Passing the Million Mark, Israel Has Vaccinated Nearly 12% of Public

More than a million people have been vaccinated since the start of Israel’s inoculation drive on Dec. 20, an amazing feat in just two weeks.

As a result, Israel has been leading the world in its vaccination efforts per capita, with Bahrain and the U.K. a distant second and third. 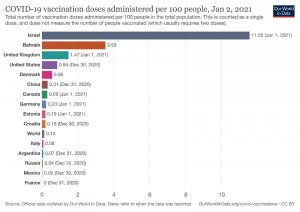 According to the Our World in Data website, Israel has vaccinated nearly 12% of its nine million inhabitants, ahead of Bahrain with 3.49% and the United Kingdom at 1.47%.

In the United States, only 2.8 million Americans had received the first dose of their COVID-19 vaccine, a far cry from the Trump administration’s stated target of 20 million people vaccinated by the end of the year.

Despite the efficacy of the treatment, which studies show is 95% effective against the coronavirus, skepticism over the safety of the treatment still remains an obstacle for governments across the globe.

According to a survey carried out in 15 countries by Ipsos Global Advisor, only 40% of the French population said they would be ready to be vaccinated. In China, 80% said they were in favor of the vaccine, 77% in the U.K., and 69% in the U.S.