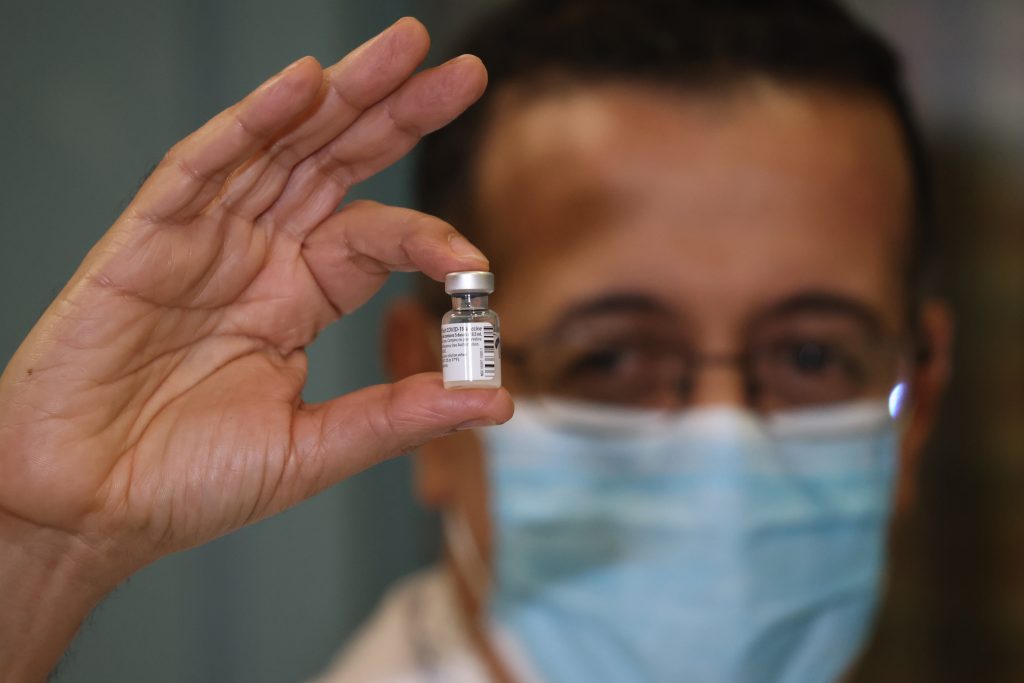 Tens of thousands of Americans have volunteered to test COVID-19 vaccines, but only about half of them got the real thing during trials.

Now, with the first vaccine rollouts and a surge in coronavirus infections, experts are debating what to do about the half that got a dummy shot.

Should everyone now be offered a vaccine? Or should the two groups in the Pfizer and Moderna studies remain intact in order to collect long-term data on how well the vaccines work?

For vaccines, researchers compare what happens when a large group of volunteers gets the shots, versus what happens to another large group that doesn’t. They compare side effects in each group. And they measure the vaccine’s effectiveness by looking at how many in each group pick up infections.

To do this fairly, researchers randomly assign participants to receive a vaccine or a dummy shot, usually a dose of salt water.

Volunteers know there’s a 50-50 chance they could be put in either group — and they are not told which group they landed in. Often, the researchers or others involved in the testing are also “blinded” and don’t know either.

SHOULD TEST VOLUNTEERS BE TOLD?

About 17,000 of Moderna’s study participants received a placebo, as did about 22,000 people in Pfizer’s trial.

With the ongoing coronavirus crisis, health experts worry about leaving them in the dark and unprotected. They argue they should be given a vaccine now in recognition of their willingness to be a part of the trials during the pandemic.

“Volunteers have been instrumental,” said Moncef Slaoui, chief scientist of the government’s Operation Warp Speed program. “They should be rewarded for it.”

The companies would have to “unblind” or “unmask” the studies, revealing whether participants got the vaccine or the dummy shot.

Unmasking is usually done at the end of testing. Moderna and Pfizer, though, designed their studies to last two years to do long-term follow-up.

“I don’t think there’s anybody who thinks it’s reasonable or feasible to keep the people blinded for two years,” said Susan Ellenberg, an expert in clinical trials at the University of Pennsylvania. “Given we have a pandemic, people are ready to settle for the short-term results.”

PROS AND CONS OF “UNMASKING”

With the rollout of vaccines and the uncertainty of their status, volunteers could decide to drop out once they are eligible to get one. They might stay in the study if they’re told what they got, said Dr. Ana Iltis, a bioethicist at Wake Forest University.

“Participants could leave in droves. They could say, ‘If you don’t tell me what I got, I’m out of here,’” said Iltis. “You cannot force people to stay.”

In an ideal world, participants could hold off to discover whether they received the dummy shot or the vaccine. But experts agree the current circumstances are extraordinary.

If someone learns they’ve already been vaccinated, for example, they may stop social distancing or wearing masks — increasing their potential exposure to the virus and possibly spreading it. It’s not yet known if vaccinated people can still carry and transmit the virus.

On the flip side, if a person finds out they only received the dummy shot, they might take precautions they wouldn’t otherwise.

Either outcome, Goodman said, “means the trial has basically come to an end.”

Before granting its emergency use approval, the FDA required Pfizer and Moderna to provide two months of follow-up data. If studies are cut short, it becomes harder to get long-term effects, including how long immunity lasts.

“There’s a reason we do clinical research in a certain way,” Iltis said. “We should not abandon our norms and our principles. Are we going to be happy with short-term evidence in a year?”

WHAT THE COMPANIES SAY

Pfizer plans to eventually vaccinate all its study participants. It’s opting for a more gradual, voluntary process. The company will offer that option to those who got dummy shots as soon as they would have access to the vaccine outside of the study.

Moderna is considering immediately offering the vaccine to all who got dummy shots. More than one-quarter of them are health care workers and first in line for the vaccine anyway, the company noted.

“Many have already left. Sadly, it’s not a small number,” said Dr. Lindsey Baden, who’s involved in testing Moderna’s vaccine at Brigham and Women’s hospital in Boston. “This is not theoretical. It’s happening.”

British pharmaceutical company AstraZeneca, which has enrolled at least 23,000 so far in its ongoing U.S. study, recently decided to offer individual participants the opportunity to be unmasked as they become eligible for the approved vaccines.

“You never really want to unblind,” said Dr. William Hartman, a researcher for AstraZeneca’s trial at the University of Wisconsin-Madison.

However, he added, the pandemic has complicated things.

“A lot of people are nervous and scared,” Hartman said. “And everyone comes into the trial hoping they’ll get the vaccine.”