Eyewitness Report of Earthquakes in Central Croatia: ‘This Is Worse Than War’

On Monday, December 28, at 6:38 a.m. we were woken up by an earthquake in Zagreb, the capital of Croatia. The magnitude was 5.2 on the Richter-scale and the epicenter was 50 kilometers (30 miles) away, in the region of the city of Petrinja. My earthquake app, installed on my phone after the Zagreb earthquake of March 22, notified me of the magnitude of two anticipated aftershocks.

Wounds were still fresh from another earthquake of 5.3 magnitude that had hit the capital on March 22 in the midst of the pandemic lockdown. The quake claimed one life and left 27 people wounded. It damaged numerous buildings, and basically the entire historical city center. My own house suffered some damage, and the building of a language institute I own and run was practically destroyed and required serious renovation. Many Jewish communal institutions were also damaged, among them the Jewish community building called Bet Israel, the elementary school Hugo Kon, the Jewish kindergarten, the Jewish museum and the Jewish retirement home.

After our experience with the previous earthquake, we all knew that the earthquake of Monday would imminently be followed by aftershocks. The earth kept trembling and shaking for months after the March earthquake, so we knew we had to brace ourselves now.

Aftershocks are usually less powerful than the initial blast, but what happened next nobody expected: a deadly 6.2 magnitude earthquake on Tuesday at 12:19 p.m. The epicenter of the quake was near the towns of Petrinja, Glina, and Sisak, exactly as the day before.

I went grocery shopping and at the time of the earthquake I was in a semi-empty parking lot where there was no risk of crumbling buildings or tumbling objects. By the time I came back home, two buildings on my block had imploded.

The earthquake was felt across the Balkans, and all the way to the Czech Republic, Hungary, Italy, Austria, and Germany. The Krško nuclear power plant, co-owned by Croatia and Slovenia, was shut down as a precaution. 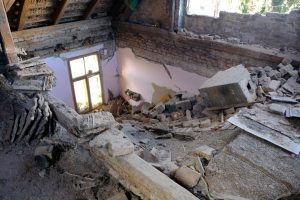 The mayor of Petrinja, Darinko Dumbović, was holding a press conference at the time the catastrophic earthquake happened and the cameras recorded the destruction and panic. In the aftermath of the disastrous quake, Dumbović said that his town had been completely destroyed and that it looked like Hiroshima.

The earthquake killed five people in the village of Majske Poljane, a 12-year-old girl in the town of Petrinja, and a man in the village of Žažina. Six people were rescued from the rubble with the help of search dogs and Croatia’s Mountain Rescue Service. Dozens were wounded. Tens of thousands of people have been left homeless.

Each person, each family, has a harrowing story to tell.

In Majske Poljane, a village completely leveled down to the ground, five villagers lost their lives. With the help of search dogs, rescuers managed to locate an old woman under the debris. As they were pulling her out, they saw that she had survived because her husband had shielded her with his body. It was too late for her husband. As the rescuers were carrying her on the stretcher, there was a feeble hand reaching out to them in despair and gratitude.

A father and a son were pulled from a car buried under debris.

National and international solidarity is unprecedented. By the end of the day on Tuesday, thousands of self-organized civilians arrived in Petrinja carrying shovels, ropes, tools, nylons to cover the roofs, water, food, blankets and hygienic supplies. Thousands of people all over the country offered to host the survivors; hotels opened up for them; some people donated their cars. Blood donors waited for over seven hours in lines to donate blood. Such was the impact of the sorrow that befell Croatia.

But people do not want to leave what until a few days ago were their homes and property. They sleep in their cars in front of their homes; some are gathered around fires they lit in huge empty tin barrels. Farmers cannot leave their cattle; others are afraid that the remnants of their homes will be robbed; most want to stay together with their neighbors and help each other out.

Tomislav Suknaić and his son recount how they hugged each other when the earthquake struck, and stood under the doorframe, expecting to die together. The whole house collapsed, but the doorframe stood firm. When the earthquake stopped, they ran out to their yard barefoot. Noticing that one of their horses was trapped, they grabbed a chainsaw and freed the horse from under a collapsed barn. The reporters ask him where he plans to go now. “Nowhere from this yard,” he replies. “We will rebuild.”

This man, as many others affected by this earthquake, will be rebuilding his home for the second time in his life.

This area was severely affected by the Homeland War (1991-1995) that followed Croatia’s separation from Yugoslavia. Many people were displaced then, leaving their homes barehanded, and had to start from scratch in 1995 when the war ended. In numerous videos with visibly shaken and distressed residents, all of them keep repeating that this experience was worse than war. “I am ready to start from the beginning for the second time,” one of them says through tears. “We will rebuild our lives back from rubble again if only dear G-d can stop these quakes.” 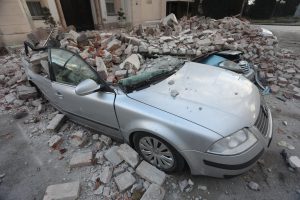 I know how they feel as I was a refugee myself for four years. When the earthquake struck in March and I found myself outside on a snowy morning in my robe, I had flashes of our 1991 displacement. This earthquake has triggered the war PTSD for many.

The footage arriving from the epicenter of earthquake is surreal. In some villages, the ground opened up, leaving massive cracks. Witnesses are describing the scenes of forests and buildings “dancing“ in front of their eyes and the ground under their feet rising and falling in wave-like motions.

I am writing this on Friday, January 1. The tremors are continuing and there is a new earthquake every 20-30 minutes. The milder ones we do not feel, it is only the buzzing of the earthquake app that notifies us about it. Experts say that the ground is going to be seismically active for at least a year because the initial blast was so strong. It is hard to be fully functional. As you sit on your couch, it starts swaying and rocking like a little boat, and when you go to bed the chandelier above your head starts rattling. Then all of a sudden you hear the agitated dogs barking and howling and you brace yourself for another one because you know that animals can sense them coming. You never know: Are you going to underestimate it or perhaps go paranoid if your start thinking how lethal it could be? Worst of all: There is nothing you can do about it. How can you be prepared for or shielded from something like this?

On Tuesday I saw a woman coming to her car to find it covered in debris and you start thinking — what would have happened had she not gotten out of it minutes before it struck? It is all really about 30 seconds difference in being somewhere or not. How can one program, plan or avoid 30-second aftershocks?

One of the villages in the affected area is Lekenik. This village was chosen to recreate the shtetl once known as Branko Lustig, who was an acclaimed Jewish-Croatian producer and a co-producer of “Shindler’s List.”

The sad reality is that many of those villages around the epicenter still look like Anatevka. Largely forgotten by politicians and everyone else, some elderly people live in poverty and they haven’t had electrical power since the war broke out in 1991. All this only an hour away from the country’s capital that basks in shallow and rapid consumerism, brand name stores, decorated holiday markets and a whole army of Instagram influencers whose messages are void of anything meaningful.

I haven’t gone to my school to check if it suffered any damage in the quakes of this week. On one hand, I am not ready to face potential damage and a new round of repairs. On the other hand, I am aware that even if my language institute got damaged for the second time, I still have many blessings to count compared to the misery and misfortune I am seeing these days.

As people around the globe anticipate that the new year is going to bring new beginnings and that the challenges of 2020 will be left behind, Croatians are entering 2021 with January 2 as a national day of mourning.