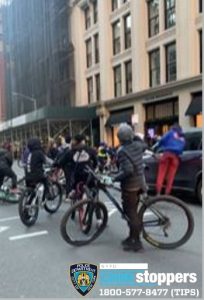 Police are asking the public for help in identifying the individual young men who surrounded  a car in Manhattan in what Police Commissioner Dermot Shea called a “shocking [and] violent attack.”

A widely circulating video shows a group of young men on bicycles surrounding a BMW car and leaping onto it, kicking the tires, punching the windows repeatedly, and even one picking up his bicycle to heave it on the hood.

The incident took place on Tuesday at 4 p.m. on East 21st Street and Fifth Avenue.

The car’s driver, Max Torgovnick, told ABC7 NY that he was driving along, surrounded by the cyclists, and then he stopped when he heard a thud. Torgovnick assumed one of them riding behind him had collided with him, and when he opened the door to check he was surrounded by agitated young men.

“I started to open up the driver door but I was immediately surrounded on every side by these kids that have just gotten off their bikes and they started screaming, yelling, punching the car, hitting the hood of the car, just yelling, ‘get out, get out, open the roll down the window, roll down the window.’ When I didn’t, they started to take out their aggression on the car itself,” he said.

Torgovnick was in the car with his mother, who hastily called 911.

“But it was only once they started smashing the windshields as soon as the windshield broke, and the glass hit our faces and landed in our laps and I realized, like the ceiling is collapsing,” he continued. “And if they jump on it one more time they’re going to gain access to the car. My mom is on the phone with 911 dispatcher.. saying.. ‘they’re going to kill us, we are going to die…please send help.'”

As soon as he found an opening, he accelerated and drove off. Police were soon at the scene to aid and calm the pair.

Neither Torgovnick nor his mother were injured, but the car sustained hundreds of dollars in damages.

“There will be consequences in this case,” he promised, calling it “absolutely unacceptable.”

Police suspect these young men may be involved in a recent attack on a taxi cab driver, who was beaten and had his car hit with bikes.

They are all wanted for criminal mischief. 25 young men were involved, six of whom actually attacked the car. At least one suspect, a fifteen-year-old from Queens, has been identified and arrested.