Suspect in Vandalization of 4 Midwood Shuls Charged With Hate Crime 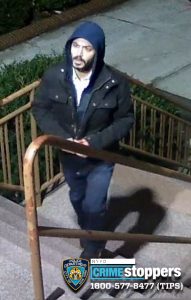 The New York City Police Department has arrested a suspect in the vandalization of four Midwood shuls last Shabbos.

Between 12:20 a.m. and 1:30 a.m. Friday night, the man scrawled graffiti, including what police described as “derogatory phrases,” on shuls located at 1694 Ocean Avenue, 2822 Avenue J, 2201 Avenue L and 1720 Avenue J. At the last location, the individual also entered the shul, scrawled graffiti inside, damaged two cabinets, and stole approximately $20.

On Thursday morning, the NYPD arrested Emil Benjamin, 39, of Homecrest, and charged him with burglary as a hate crime.

New York Gov. Andrew Cuomo said in a statement earlier this week that he was “disgusted to my core” to learn of the vandalism. “Hate, in any of its forms, will not be tolerated in New York,” the governor said, “and we will always stand united against the cowards who seek to sow division and attack people for who they are or what they believe. ”