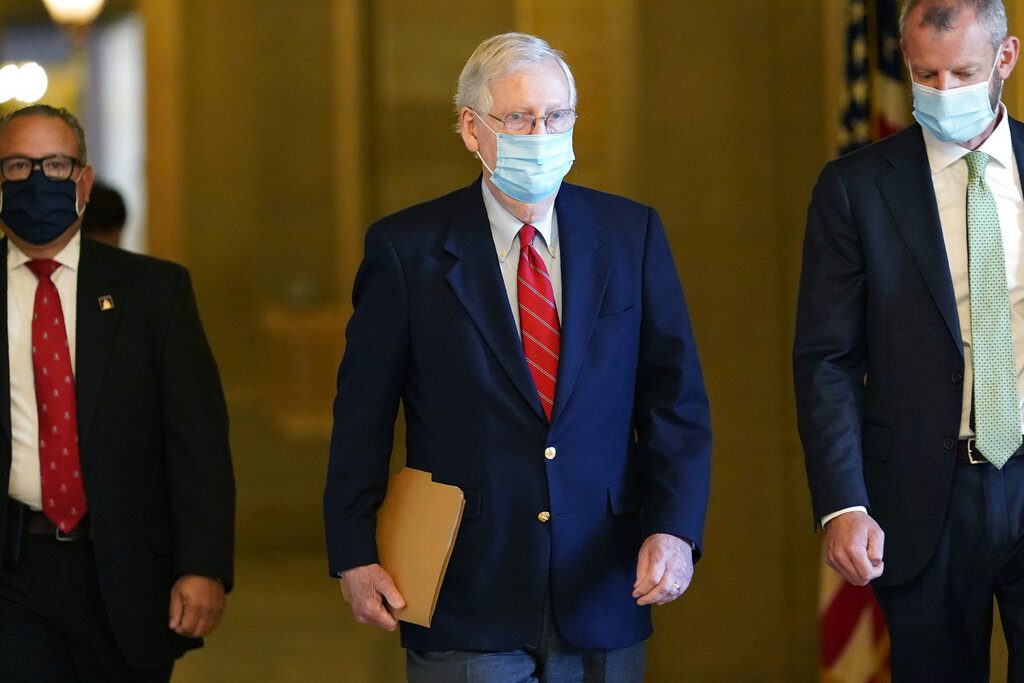 “More help is on the way. Moments ago, in consultation with our committees, the four leaders of the Senate and House finalized an agreement for another major rescue package for the American people,” said McConnell, R-Ky.

He said lawmakers only have to “promptly finalize text” and “avoid any last-minute obstacles.”

Lawmakers have for month sought a breakthrough on economic relief legislation.

House Speaker Nancy Pelosi, D-Calif., told her leadership team earlier in the day that she wanted a vote Sunday, according to one person who spoke on the condition of anonymity to share details of the congresswoman’s private comments. Congress has until midnight to pass a temporary stopgap measure to keep the government open.

Congress would also extend unemployment benefits of up to $300 per week, which could start as early as Dec. 27.

While there’s broad agreement on stimulus checks and unemployment insurance, officials say nothing is final until the bill text is released. That may come as early as Sunday afternoon. Other policy disputes remained outstanding, according to aides close to negotiations, which could push the timeline back again.

House leaders are exploring another stopgap measure that would fund the government while also giving them seven days to file technical corrections to the legislation if necessary. They would still plan on pass the relief package within 24 hours.

At 12:18 a.m. on Sunday, President Donald Trump tweeted that Congress needs to give “more money in direct payments.” The Washington Post reported last week that White House aides talked Trump out of issuing a public statement demanding stimulus checks as big as $2,000 out of fear that he would sink the delicate negotiations.

Congressional lawmakers appeared ready to ignore the president’s demands. People close to negotiations said they did not expect the White House to oppose the package over Trump’s push for larger stimulus payments, though Trump has repeatedly scrambled congressional negotiations with last-minute demands.

Lawmakers have agreed in principle to new stimulus payments. Sens. Bernie Sanders, I-Vt., and Josh Hawley, R-Mo., as well as Trump, have made a push for more generous stimulus checks, but those efforts are unlikely to be successful.

Adult dependents are not expected to qualify for the stimulus payments, people familiar with the negotiations said, despite a push from congressional Democrats. The deal would include stimulus payments for families in which one of the parents is not a citizen.

The deal over extending federal jobless benefits for millions of unemployed Americans at a level of $300 per week would cover up to 11 weeks of unemployment, at least through March 14, aides familiar with the negotiations said. An unemployment benefits program for contract and gig workers, which is also set to expire at the end of the year, would be extended for 11 weeks for those workers.

Negotiators also agreed to extend the deadline for states and cities to use unspent money approved for them by the Cares Act, two people familiar with internal deliberations said. States and cities have until the end of the year to spend billions of dollars before it expires and has to be returned to the federal government. The deal would instead extend that deadline for a full year.

Republicans have successfully opposed Democrats in their demands for hundreds of billions of dollars in state and local aid. Many local governments are experiencing steep declines in tax revenue and have been warning of layoffs. Extending the deadline for using leftover funding from the Cares Act, however, allows Democratic lawmakers to say that they still provided some relief to ailing municipalities.

The bill would extend for one month a moratorium on evictions that is set to expire at the end of the year, two people with knowledge of the matter said. The moratorium would be extended through January, at which point Democrats believe the incoming Biden administration could extend it again. The legislation would also provide about $25 billion in emergency assistance to renters, the people said, though it remained unclear how that money would be disbursed.

Lawmakers had also appeared to resolve a dispute over whether businesses that received Paycheck Protection Program loans, and had them forgiven, will be allowed to deduct the costs covered by those loans on their federal tax returns. Sen. John Thune, R-S.D., the No. 2 ranking Republican senator, said the costs would be deductible under the final agreement.

Other hurdles to a deal remain under discussion, according to the aides close to negotiations. For instance, Pelosi told Democratic lawmakers Saturday that the parties remained divided over how much aid to provide for hungry Americans.

Even if leaders are able to resolve remaining sticking points on Sunday, it may take more time for congressional staff members to draft those agreements into legislative text and prepare the massive bill for votes in the House and the Senate. Lawmakers had also not yet released text of the agreement between senior Democrats and Sen. Pat Toomey, R-Pa., over the central bank, which was a sticking point Saturday.

Lawmakers had hoped to vote this weekend on legislation to fund the government along with the broader relief package. Bill language had not materialized by Sunday morning.

The emerging legislative package is expected to also devote as much as $330 billion in small-business aid and allocate tens of billions of dollars to an array of other critical needs, such as transportation agencies, distressed renters and hungry people.

A compromise proposal this month by Sens. Mitt Romney, R-Utah, and Joe Manchin, D-W.Va., among other centrist lawmakers, would have provided 16 weeks in unemployment benefits instead of the 11 weeks under the current agreement.

The push for an approximately $900 billion relief plan gained new momentum Saturday night as lawmakers resolved a dispute over a Republican plan to rein in the Federal Reserve.

As part of his proposal, Toomey wanted the Fed’s lending programs for businesses and local governments to be cut off at the end of the year, and to ensure that no similar programs could be propped up later.

While Toomey and Republican leadership held firm for much of Saturday, Democrats chastised the plan, saying it stretched far beyond specific programs propped up under the Cares Act. They also said the GOP was undermining the Fed’s ability to fight future crises, and with it, the incoming Biden administration.

Despite hopeful statements from leadership on timing of passing the relief legislation, other lawmakers, including Sen. John Cornyn, R-Texas, have cast doubt that Congress could pass the measure on such an accelerated timetable.