AUTO REVIEW: 2021 Land Rover Defender Is a Skillful Update of an Iconic SUV 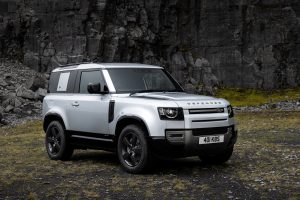 Gerry McGovern, chief design officer for Land Rover, knew what he wanted when the time came to redesign the iconic Land Rover Defender, the brand’s oldest vehicle, one whose styling had changed little over the decades. “I wasn’t constantly thinking about the old one and told the team not to do that either,” he said. “I think if we became preoccupied with that, it would become debilitating.”

Instead, McGovern and his team developed the vehicle as if it had never existed, while maintaining its legendary off-road capability and durability. The resulting production car’s exterior styling changed little from the first prototype, although the same is not true of the interior, which initially had a lot more exposed structure but couldn’t pass safety regulations.

“I think the car pays a very respectful nod to the original without being held back by it. It would be completely dishonest as a group of professional designers to create something for today that looks like something that was designed 60 years ago. To me that’s not design, that’s retrospective-ism in the extreme and it’s dishonest.”

Massimo Frascella, Land Rover creative director, admits that it would be very easy to just look at the old Defender and update it to pass current regulations and crash tests. “And you can do that,” he said. “But it just doesn’t feel the right thing to do for our brand. It doesn’t feel like it would belong to modern days. It will still feel like you’re so anchored to the past that you’re not moving forward.”

And so arrives the 2021 three-door Defender 90 and five-door Defender 110, vehicles that honor their iconic forbears without slavishly imitating them.

Certainly, Land Rover has pulled off no mean feat, skillfully updating the Defender’s appearance with an expertly modern balance of ruggedness, luxury and heritage. While its form seems softer than the previous Defender, the overall shape retains the strong proportions that give it a unique persona. It’s special in the way icons are always special, and you feel that distinctiveness from the minute you get behind the wheel.

As with any true sport utility vehicle, you step up into it, a testament to its engineering, and its ability to go over any terrain with as much as 11.5 inches of ground clearance and the capability to ford 35.4 inches of water. Let’s see your mall-crawling crossover do that.

McGovern’s styling acumen continues inside, with a cabin that’s functionally luxurious. The magnesium crossbeam running across the instrument panel is more than a modern styling touch; it’s part of the structure of the vehicle. Exposed rivets populate the interior, lending a rugged counterpoint to the Defender’s leather-clad seats. Speaking of seats, how many you get depends on the model you choose. Defenders come with two rows, although the longer 110 is available with three rows, and an optional front center jump seat, providing seating for up to eight. Storage is abundant.

There’s a large screen atop the center of the instrument panel that provides infotainment and navigation. Apple CarPlay and Android Auto and a six-speaker audio system are standard; 10- and 14-speaker Meridian stereo systems are optional. But the screen also hosts the views provided by the Defender’s many cameras, a boon when off-roading through tight confines, traversing jagged rocks or blindly cresting hills. In addition, the Terrain Response system optimizes the vehicle’s performance on trail conditions as diverse as mud and ruts, sand and rock.

Towing with the Defender has never been easier, thanks to its 8,201-pound towing capacity, 370-pound roof capacity and available advanced tow assist, which allows drivers to back up trailers using the Defender’s center console-mounted rotary controller and 3-D visualization of the trailer’s movement on the touchscreen.

Powering all of this off-road adventure is a base 2.0-liter turbocharged four-cylinder engine generating 296 horsepower and 295 pound-feet of torque, enough to propel the Defender to 60 mph in 7.7 seconds. Opt for the turbocharged and supercharged 3.0-liter inline six-cylinder powerplant mated to a 48-volt mild hybrid driveline and you’ll get 395 horsepower and 406 pound-feet of torque that reaches 60 mph in 5.8 seconds. All-wheel drive is standard, although locking differentials are optional on some models. Standard driver-assist features include forward collision warning, automatic emergency braking, blind-spot warning and lane-keeping assist. Adaptive cruise control and rear cross-traffic alert are optional.

With short front and rear overhangs, and an externally mounted spare tire, the Defender’s form is optimized for off-roading. The same is true of its handling, although off-road prowess doesn’t come at the expense of on-road behavior. Yes, the articulation needed for off-road conditions does lend the Defender a comfortably compliant ride, which means there is some body lean when cornering, but it’s far from excessive and easily managed. Certainly its overall manner is far more refined than the Defender that came before it, although that doesn’t come at the expense of capability. Some may bemoan the newfound sophistication, but most buyers will prefer it.

Given changing safety regulations, the Defender had to evolve, and with it comes another flavor of Land Rover, one that’s sure to entice those whose idea of off-roading goes beyond running over the shrubs at the end of the driveway. 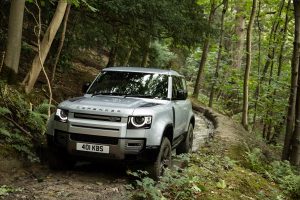 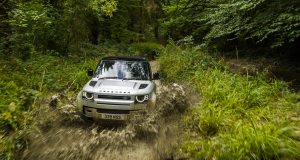 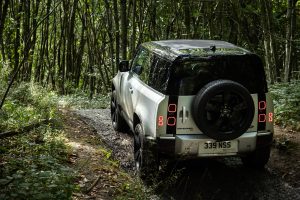 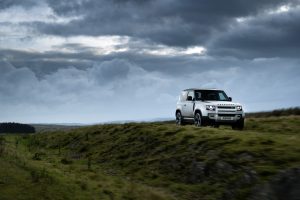 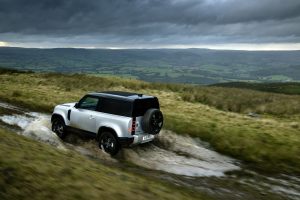 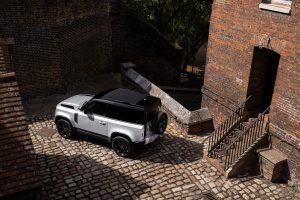 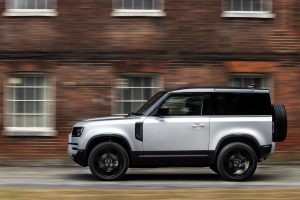 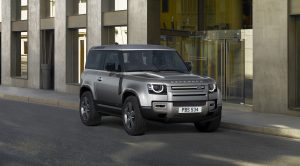