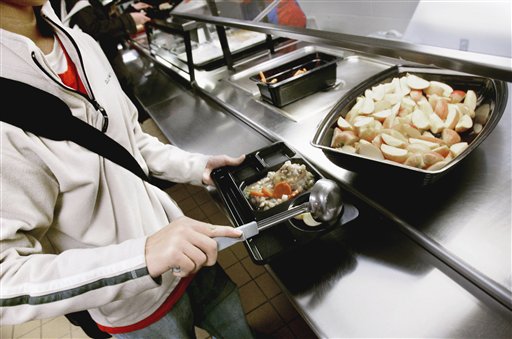 In their last days in office, Trump administration officials are trying to reduce nutrition requirements for school meals, seeking to undo changes initiated by the Obama Administration a decade ago.

The U.S. Department of Agriculture says it wants to allow school districts to be more “flexible” with rules that previously stipulated 100% whole grains, reductions in sodium levels and a switch to fat-free flavored milk.

The Trump Administration would halve whole-grain requirements to 50%, do away with sodium-reduction targets and re-introduce 1% chocolate milk.

Anti-hunger advocates say the rule change will disproportionately affect low-income children who depend on school meals for balanced nutrition.

“It’s yet another example of the Trump administration ignoring science,” said Kathy Fisher, policy director of the nonprofit Greater Philadelphia Coalition Against Hunger, which helps connect people in need to food programs. “Medical professionals and nutritionists helped create these rules years ago because they’re best for kids.”

The USDA says food rules for school meals should change because data shows that 25% of nutrients are currently being “wasted.” Children don’t like the healthier options, the USDA says, and many simply aren’t eating what’s being served, according to a spokesperson: “If they are not eating, children are not benefiting, and we don’t want to let that happen on our watch.”

In 2017, his first year in office, Trump tried to change the Obama-era grain, sodium and milk stipulations, but was later rebuffed by a federal judge who, ruling on a technicality, said the administration had not altered the guidelines in the proper manner.

But recently, the administration has made another go of it, in spite of an overwhelming set of comments by experts and others nationwide saying it was the wrong thing to do.

The administration is racing to make changes before the inauguration of President-elect Joe Biden. To get its rule promulgated, the administration must hold yet another comment period that will last until the final week of the year. Then it must be written and ready to go before Inauguration Day on Jan. 20.

“They’re running up against the clock,” according to a statement from the Heritage Foundation, a conservative think tank. “They need to finish under deadline, but also make sure they cross their t’s and dot their i’s, so they can survive any legal challenges.”

Although a new president will be in charge soon, that doesn’t mean potential Trump Administration changes can be easily reversed.

Unlike an executive order that a new president could rescind simply by signing his name, completed regulations such as Trump’s desired school-meal nutrition alterations are much more difficult to overturn. It would take a court decision or another painstaking rule-making effort, experts said.

“The likely outcome will be that Biden wouldn’t be able to change Trump’s potential new rule for the rest of this school year and into the next school year,” said Geri Henchy, director of nutrition policy for the Washington, D.C.-based Food Research & Action Center, the largest anti-hunger lobby in the United States. “In the long run, Trump will fail, but in the short term, he may succeed.”