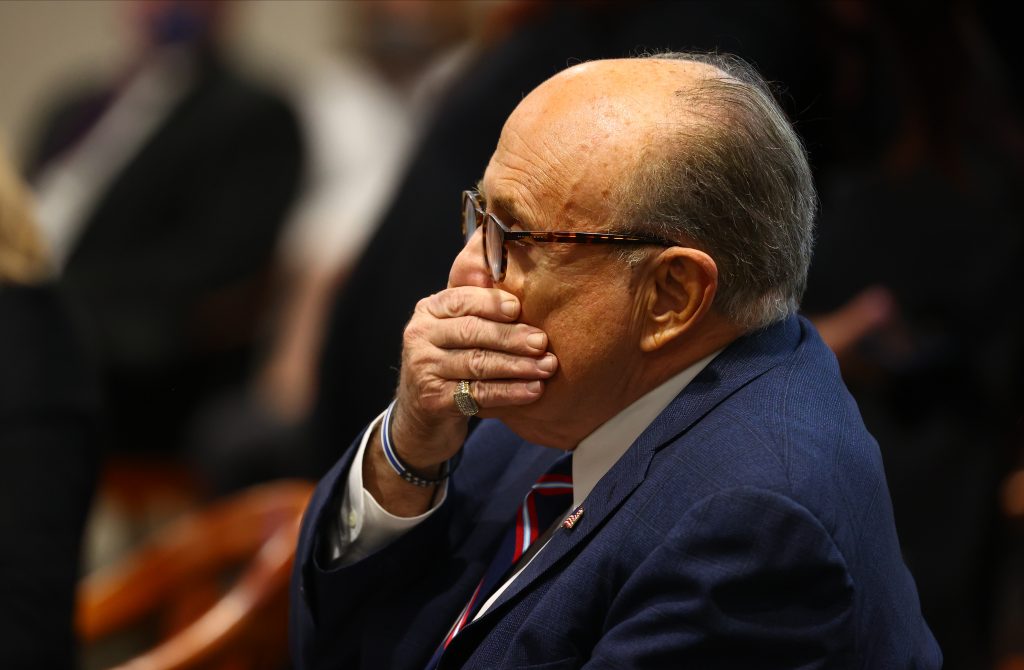 President Donald Trump said Monday his personal attorney Rudy Giuliani was “doing very well” after being hospitalized with COVID-19, as lawmakers in battleground states that Giuliani visited last week scrambled to make sure they did not contract the coronavirus.

The 76-year-old former New York mayor, hospitalized in Washington, had traveled extensively to battleground states to press Trump’s effort to get legislators to overturn his election loss to Joe Biden. On numerous occasions, Giuliani met with officials for hours at a time without wearing a mask, including hearings last week with state lawmakers in Arizona, Georgia and Michigan.

Fallout from Giuliani’s diagnosis continued Monday, as the Michigan House announced it had canceled its voting session scheduled for Tuesday. Giuliani spoke for hours last week before a Republican-led committee in Lansing investigating alleged election irregularities.

Michigan’s move came after the Arizona legislature announced Sunday that it would close for a week out of an abundance of caution “for recent cases and concerns relating to COVID-19.”

“Multiple representatives have requested time to receive results from recent COVID-19 tests before returning to session, out of an abundance of caution,” Michigan House Speaker Lee Chatfield, a Republican who met with Giuliani before the hearing, said in a statement. “The CDC guidelines would not consider them close contacts with anyone, even if Mayor Giuliani had been positive, but they want to go above and beyond in the interest of public safety. With the recent spike in COVID cases nationwide, this makes sense.”

The health department in Ingham County, where Lansing is located, said several people who attended the Michigan committee meeting with Giuliani on Wednesday must quarantine at least through Saturday. Health officer Linda Vail said she consulted with the state health department, which agrees that “it is extremely likely that Giuliani was contagious during his testimony.”

In Georgia, state Sen. William Ligon Jr., chairman of the subcommittee Giuliani testified before, urged those who had come in close contact with Giuliani “to take every precaution and follow all requisite guidelines to ensure their health and safety.” Giuliani on Thursday attended a hearing at the Georgia Capitol, where he went without a mask for several hours. Several state senators, all Republicans, also did not wear masks at the hearing. The Georgia legislature is not currently in session.

Trump, who announced Giuliani’s positive test in a Sunday afternoon tweet, told reporters he spoke with Giuliani on Monday. Giuliani was exhibiting symptoms when he was admitted to Georgetown University Medical Center on Sunday, according to a person familiar with the matter who was not authorized to comment publicly.

At Wednesday’s 4-1/2-hour hearing in Lansing, Giuliani did not wear a mask; nor did lawyer Jenna Ellis, who was sitting next to him. He asked one of his witnesses, a Detroit election worker, if she would be comfortable removing her mask, but legislators said they could hear her.

Giuliani traveled last Monday to Phoenix, where he met with Republican legislators for an hours-long hearing in which he was maskless. The Arizona Republican Party tweeted a photo of Giuliani and several state GOP lawmakers standing shoulder-to-shoulder without masks.

The Trump campaign said in a statement that Giuliani tested negative twice before his visits to Arizona, Michigan and Georgia. Unidentified Trump team members who had close contact with Giuliani are in self-isolation.

“The Mayor did not experience any symptoms or test positive for COVID-19 until more than 48 hours after his return,” according to the statement. “No legislators in any state or members of the press are on the contact tracing list, under current CDC Guidelines.”

“Little did I know that most credible death threat that I encountered last week was Trump’s own lawyer,” Jordan tweeted. “Giuliani — maskless, in packed hearing room for 7 hours. To say I am livid would be too kind.”

Giuliani’s diagnosis came more than two months after Trump himself was stricken with the virus in early October. Since then, a flurry of administration officials and others in Trump’s orbit have also been sickened, including White House chief of staff Mark Meadows; Ben Carson, the secretary of housing and urban development; Trump’s wife, Melania, and their teenage son, Barron; and adviser Hope Hicks.