In What Merit – See Video of Sorotzkin Fire

A massive inferno engulfed apartment buildings on Rechov Sorotzkin, a main thoroughfare in the middle of the American frum community in Yerushalayim. The flames ripped through a central underground parking complex, devouring numerous cars and storage rooms and singeing apartments and stairwells as well. With great chasdei Shamayim, there were no fatalities, although many were rushed to the hospital for smoke inhalation and minor injuries. For hours, firefighters battled the blaze and rescued people trapped in different parts of the massive complex. The charred rubble left in the wake of the fire remained as a frightening reminder of the devastation.

A friend of mine walked in to yeshivah one morning exhausted and reeking from smoke. As a resident of the building, he was one of the many evacuated in the middle of the night and spent the next harrowing hours overwhelmed with anxiety over his fate and that of his neighbors and their property.

Although he was extremely tired, he told me he was grateful to be alive and lauded the chessed of the frum community who comforted one another while giving out jackets and sweaters, food and drink, to the shivering evacuees. As the boys and Rebbeim gathered around us to hear his take of the events, he announced that he had a story to tell. Whipping out a small video recorder, he showed us images he’d captured of the raging fire as well as of the charred remains.

After the flames were extinguished, he walked through the complex, video in hand, grabbing images of the wreaked havoc. In the first video, bright yellow and red flames of the inferno filled the screen. In the second, there was only one color: black.

He pointed out the skeletons of numerous cars, burnt to a crisp, as well as the seared remains of massive storage bins, one after the other, totally destroyed. Shockingly, conspicuously, one car and one container stood erect, untouched by the blaze.

“That’s my car and my bin,” he announced. “And I have no doubt as to why they survived.” And then he told us this:

A week before Sukkos, a neighbor knocked on his door and asked for his assistance in fixing a leak that he had. He was glad to help and they worked hand in hand for quite a while. At a certain point, the neighbor divulged that he had been diagnosed with corona. He ignored his own quarantine obligations and totally disregarded the danger of possibly infecting my friend. “We are outside so it’s really not a problem.”

Not surprisingly, he was wrong. My friend caught the virus, as did his entire family. They spent Sukkos confined to their home, sick and in bed. My friend was livid, and rightfully so. Although, baruch Hashem, the saga is over, he struggled to get past his anger at his neighbor’s inconsideration. The guy put his and his family’s lives in jeopardy and ruined their Yom Tov.

Shortly before Sukkos, my friend read a story told by Harav Meilich Biderman, shlita, about a kallah whose corona wedding was invaded by the police because a jealous neighbor had informed on the event. She spent the happiest day of her life in the local precinct. After the “whistle blower” revealed himself and asked for forgiveness, she valiantly found a place in her heart to be mochel him. The next day, the kallah was involved in a major traffic accident and, to the utter shock of onlookers and emergency personnel, she miraculously exited a crushed vehicle, unscathed.

My friend read this story and was inspired to conquer his own feelings of anger and forgive his neighbor. It wasn’t easy, but the night before the fire ravaged his building, he courageously declared his mechilah. He has no doubt that his car and his storage facility were spared in that merit. 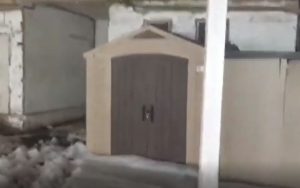