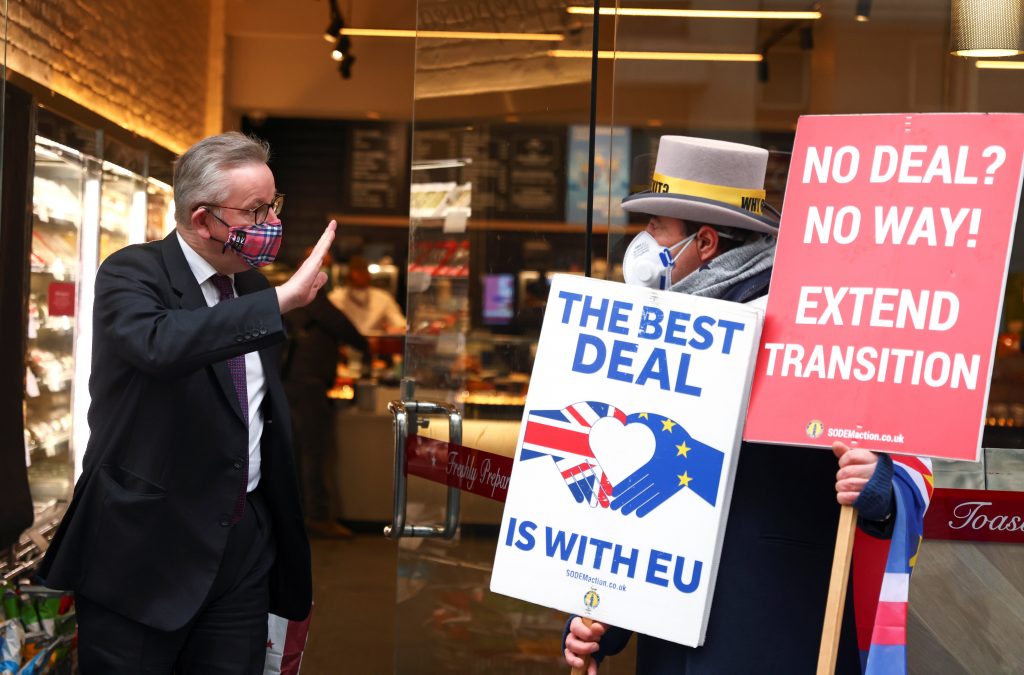 Britain and the European Union cautioned each other on Monday that time was running out for a Brexit trade deal as negotiators sparred over state aid, enforcement and fishing in a bid to avoid a tumultuous exit in just a month’s time.

The United Kingdom finally leaves the EU’s orbit on Dec. 31 when a transition period of informal membership ends, though both sides are rushing to hash out a deal that will govern nearly $1 trillion in trade.

Prime Minister Boris Johnson, who is grappling with Europe’s worst official death toll from COVID-19, says a deal would be preferable but that Britain would flourish without a deal when it goes it alone after 48 years of membership.

“We really are now running out of time. This is the crucial week — we need to get a breakthrough,” British Environment Secretary George Eustice told Sky, adding that if good progress was made this week then negotiations could be extended.

The EU delivered a similar message.

“We are running out of time here,” said Ireland’s Brexit supremo, Foreign Minister Simon Coveney. “The truth of Brexit is now being exposed in terms of the challenges of it.”

After breaking all the deadlines imposed by both sides, the negotiators are still stuck on three main areas: fishing, state aid and how to resolve any future disputes. They have been stuck on those three issues for weeks.

A trade deal on goods would safeguard nearly $1 trillion in annual trade and buttress peace in British-ruled Northern Ireland, though some disruption is almost certain at the busiest EU-U.K. border points.

“David Frost had made clear that we’re continuing the negotiations because we still think there is a prospect that we can get an agreement and while there is we should persevere with those,” Eustice said.

Ireland’s Coveney said this was a key week and that a deal could be done if there was give and take on both sides.

But he told Ireland’s Newstalk Radio that a failure to agree on fishing rights could wreck a deal.

“If there isn’t an agreement on this, the whole thing could fall on the back of it and that’s the worry,” he said.

While fishing alone contributed just 0.03% of British economic output in 2019, it is an emotive subject; many Brexit supporters see it as a symbol of the regained sovereignty they hope leaving the EU will bring. Combined with fish and shellfish processing, the sector makes up 0.1% of U.K. GDP.

Britain wants “zonal attachment” to agree a total allowable catch for the United Kingdom’s waters – a step that would give it a much larger quota share than if the fish maths were worked out on the EU’s proposals.

“All we’re asking for … is there to be annual negotiations based on the science and also for there to be a move towards a fairer, more scientific sharing methodology, which is called zonal attachment, which is broadly where the fish are to be found,” Eustice told BBC radio.

“Under that analysis we currently only have access to about half of the fish in our own waters. That is profoundly unfair on our fishermen — we’ve been clear throughout that needs to change.”