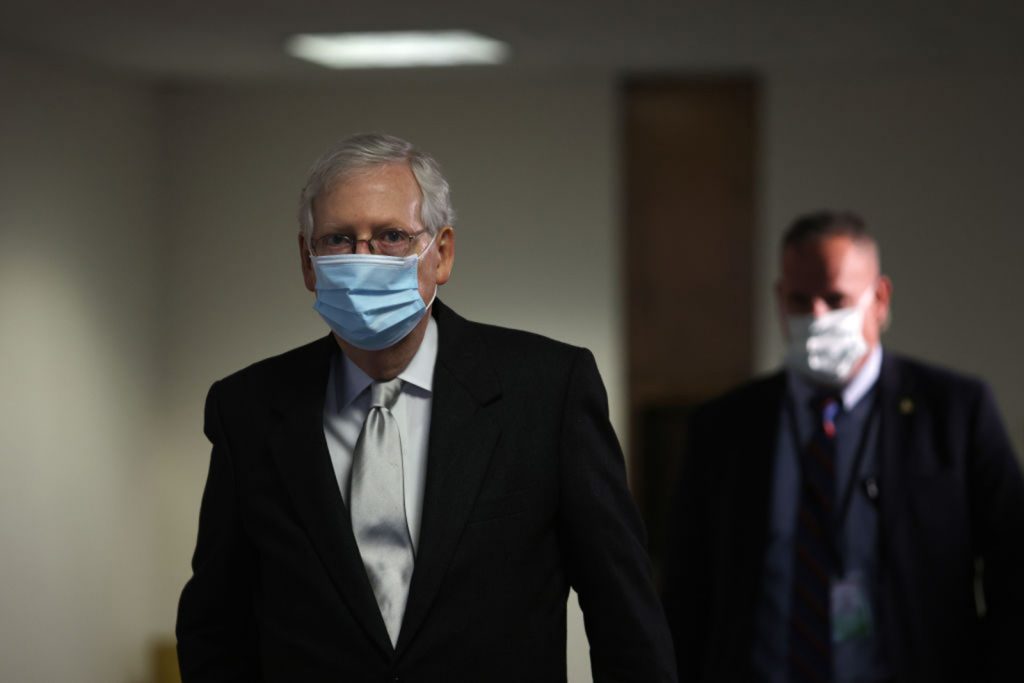 Less than two months remain in the Trump administration, and Senate Republicans are doing something not seen in a century — confirming judges and other nominees after their party lost the White House. That norm-breaking rush to get GOP-approved picks through could get tricky, though, if lawmakers continue missing time because of COVID-19.

With only one exception, post-election confirmations of judges nominated to lifetime appointments by a president whose party has lost the White House hasn’t happened since the election of 1896 when William McKinley was elected and the Senate confirmed Grover Cleveland’s picks.

So far in this lame-duck session, the Senate has confirmed six nominees to U.S. district courts and one to the Court of International Trade, starting on Nov. 10 and before leaving town on Nov. 18.

During previous presidential election years, senators have invoked the so-called Thurmond rule, an unwritten agreement named after the late Sen. Strom Thurmond, R- S.C., that calls for the chamber to stop approving circuit court nominations in the few months before Election Day.

But Senate Majority Leader Mitch McConnell is following through on a leave-no-vacancy-behind promise. He vowed, “We’re going to run through the tape” in an October appearance on Hugh Hewitt’s radio show. “We go through the end of the year, and so does the president,” the Kentucky Republican said.

Before the Senate left town for the Thanksgiving holiday, McConnell teed up three more nominees for when senators return, including one tapped to serve at the U.S. district court level, one for a 15-year term on the Court of Federal Claims, and a member of the National Credit Union Administration Board.

On Monday, the chamber will vote to cut off debate on the nomination of Taylor B. McNeel to be a district judge for the Southern District of Mississippi.

Russell Wheeler, president of the Governance Institute and a visiting fellow at the Brookings Institution, said the only exception to judicial confirmation after an incumbent or term-limited president’s party was defeated was in 1980, when a bipartisan agreement was reached to confirm now- Supreme Court Justice Stephen G. Breyer to a seat on the U.S. Court of Appeals for the 1st Circuit. The confirmation vote was 80–10.

The Senate Judiciary Committee on Nov. 18 heard testimony from its next crop of nominees: Thomas L. Kirsch II, nominated to replace now- Supreme Court Justice Amy Coney Barrett on the U.S. Court of Appeals for the 7th Circuit; three district court nominees and one for the U.S. Court of Federal Claims.

The appeals courts had been filled until Barrett was confirmed on Oct. 26 to the high court in a truncated nomination process to replace the late Justice Ruth Bader Ginsburg. A second vacancy opened that same day on the 1st Circuit, after the death of Judge Juan R. Torruella.

McConnell rushed to confirm Barrett before Election Day, arguing that the GOP had a mandate from voters to confirm her.

“You can’t win them all, and elections have consequences,” McConnell said on the Senate floor in October. He told Hewitt he hopes there will be time to fill the 1st Circuit seat as well.

The recent spate of Republican senators either testing positive for COVID-19 or isolating because of exposure could complicate the confirmation machine.

The absences of Grassley and Scott and opposition from three GOP senators has already led to the chamber failing to cut off debate on the nomination of Judy Shelton to the Federal Reserve on a 47-50 vote. McConnell voted against the procedural move, thus reserving his right to call it back up.

But time is running out to bring up more nominees, especially if any picks like Shelton face opposition from Republican senators.

Arizona Democrat Mark Kelly, who beat GOP Sen. Martha McSally in a special election to serve out the remaining two years of the late John McCain’s term, will be sworn in soon, shrinking the Republican majority to 52.

It’s not clear who will prevail in the double Georgia Senate runoff on Jan. 5 that will decide which party controls the Senate in the next Congress, but regardless of who wins, McConnell and Graham will keep the confirmation machine moving forward as long as they can.

“The Senate Judiciary Committee will continue to process judges nominated by President Trump,” said Taylor Reidy, a spokeswoman for the committee. “We have confirmed over 220 and look forward to confirming even more.”