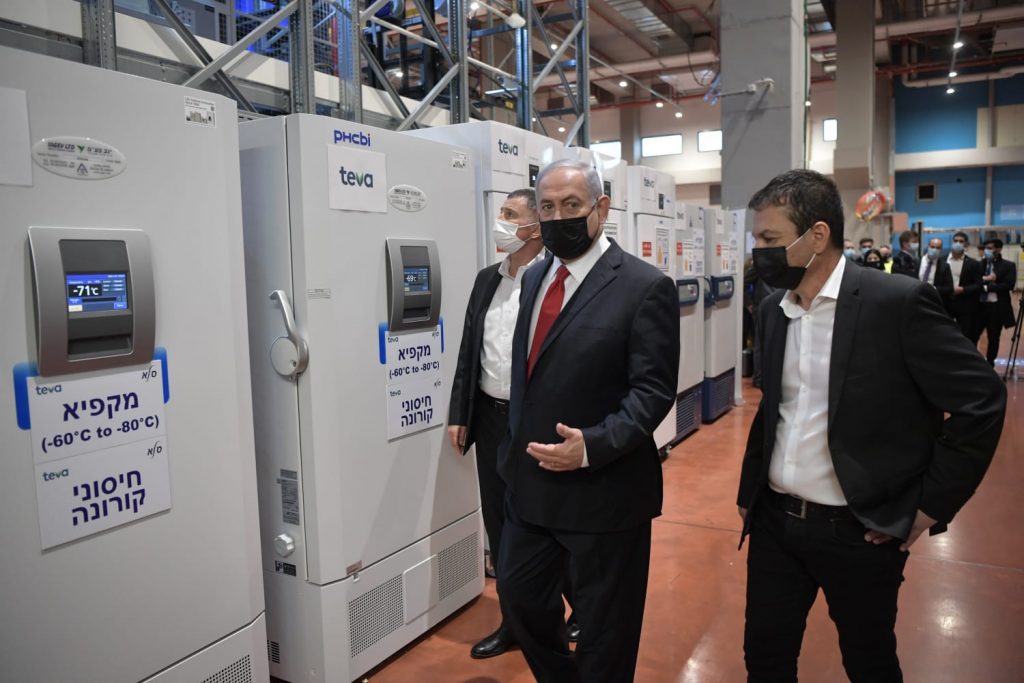 Prime Minister Binyamin Netanyahu and Health Minister Yuli Edelstein on Thursday visited the Teva SLE Logistic Center, which is due to store and handle the vaccines against coronavirus under special conditions.

Netanyahu was briefed by Teva Israel General Manager Yossi Ofek on the preparations at the site ahead of the arrival of the vaccines, the special refrigeration conditions and the transport to labs.

The head of the National Security Council, the Health Ministry director general, the general manager of Teva Israel and other officials also participated in the tour.

Netanyahu said at the conclusion of the visit: “We are here to see directly the ability to store the vaccines in low temperatures and then thaw them out and bring them to the citizens of Israel.

“I am impressed that there is a world-class plant here, a well-managed logistic center, that can receive the millions of vaccines that we are bringing together to the State of Israel, in effect to end the pandemic. We are well prepared here.

“Next week, the health minister will bring a professional team that will present to me and to the defense minister the way in which the vaccines will be allocated, but we are en route to the exit from the pandemic. This will take a little more time, a few months. It also requires the cooperation and continued discipline of the citizens of Israel. If we act together, as we have up until now, we will be on the way out of the pandemic. We do not see the light at the end of the tunnel here; we already see a very large torch.”

The prime minister added: “There are two things that are critical: One, we will have millions of vaccines, and every citizen of Israel who so desires will be able to be vaccinated more than once. Second, from what we have seen here today, there is no logistical restriction on preserving, freezing and allocating these vaccines. This is very important news ahead of the end of the pandemic in Israel.”

Health Minister Yuli Edelstein said that “This tour is part of the process that began several months ago with dedicated work by several people in order to bring the hoped-for vaccines to the citizens of Israel. As soon as we sign the contract, the work does not end, it intensifies. We are very pleased that we have partners like Teva SLE in order to get going.

“It is not merely light at the end of the tunnel but a track we are on. However, in order to get there, it must be remembered that there are several difficult months left and only by cooperating with the public will we be able to live reasonable lives alongside the coronavirus.”