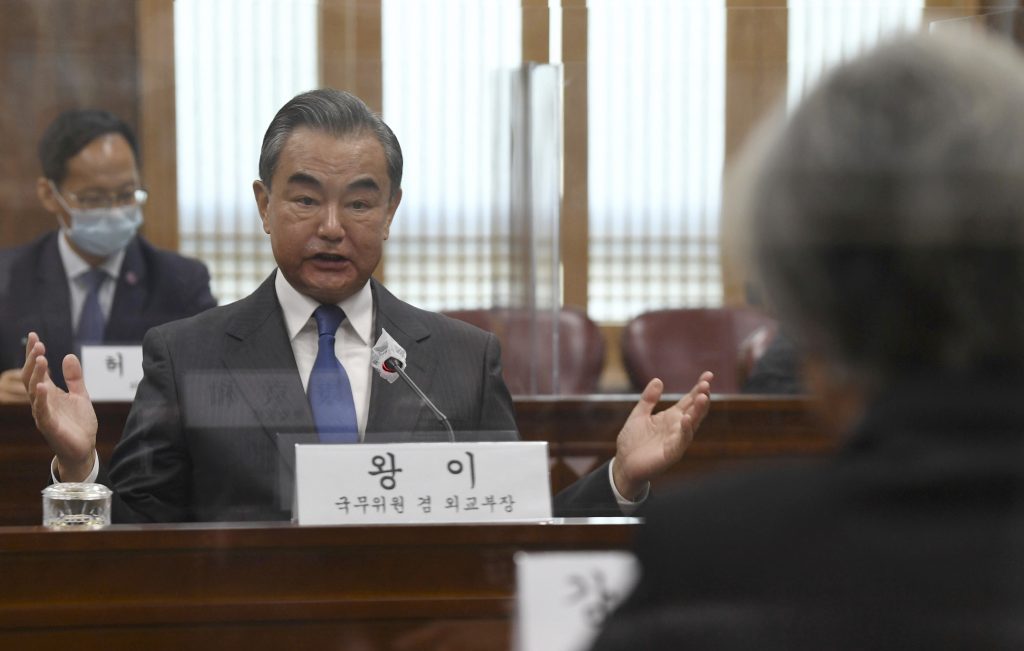 China’s top diplomat on Thursday stressed the importance of bilateral relations while meeting senior officials in South Korea, where there’s growing concern the country is becoming squeezed between its biggest trading partner and military ally the United States.

After meeting South Korean Foreign Minister Kang Kyung-wha, Chinese Foreign Minister Wang Yi told reporters that his visit amid a spreading coronavirus pandemic shows how much Beijing values its relations with Seoul. He called for stronger cooperation over anti-virus efforts, trade and finding a peaceful solution to a nuclear standoff with North Korea.

When asked whether Beijing was pressing Seoul to choose a side amid rising U.S.-China tensions over trade, security and other issues, Wang said, “America is not the only nation in the world.”

“There are 190 countries and each of them are sovereign nations,” he said. “They include China and South Korea, which are close neighbors and should visit each other more often like relatives.”

In Tokyo Wednesday, Wang told Suga that he wants the two Asian powers to have good relations and cooperate in fighting the coronavirus and reviving their pandemic-hit economies. But the two sides remain at odds over an island dispute.

South Korea has been eager to repair its relations with China, its biggest trade partner that reacted furiously to Seoul’s decision to deploy an advanced U.S. anti-missile system on its soil in 2016 to better cope with North Korean threats. There’s also concern in South Korea over a deepening row between Washington and Beijing over trade, security, human rights and other issues, which could force Seoul into a difficult balancing act.

China, which has claimed that the U.S. anti-missile system in South Korea could be reconfigured to peep into its territory, had been accused by Seoul of retaliating by limiting Chinese tour groups visits to South Korea. Beijing also destroyed South Korean supermarket giant Lotte’s business in China after the company sold a plot of land to the South Korean government where the anti-missile system was later installed.

South Korea had hoped to secure a visit by Chinese leader Xi Jinping this year in what Seoul officials describe as a key step in repairing relations, but the pandemic has complicated such plans.

When asked about a possible visit by Xi, Wang pointed to the face masks worn by reporters, saying that the coronavirus situation must first be contained.

South Korea earlier reported 583 new cases of the coronavirus, its biggest daily increase in about eight months, as a resurgence in the greater capital area threatens to erase hard-won gains.