Business AUTO REVIEW: The Hyundai Ioniq Hybrid Is Fine, as Long as You’re Not in a Hurry
Business 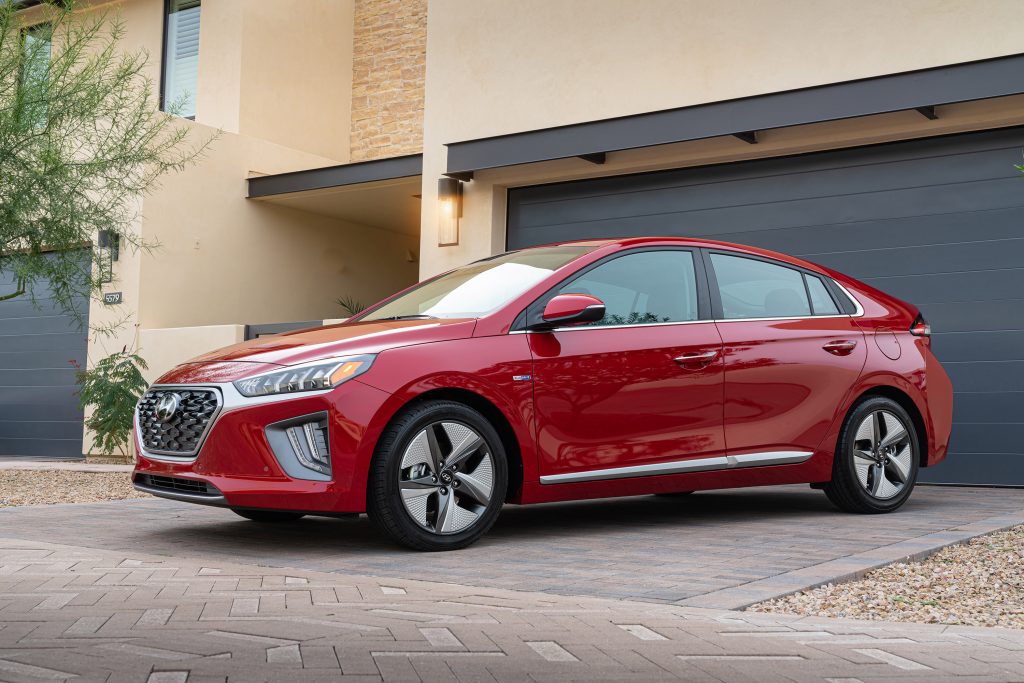 Well, this is a tough spot.

The feds are imposing tough EPA mandates for automakers to maximize fuel economy at a time when gas prices are cheaper than they were in the 1960s when adjusted for inflation. Yet given the price at the pump, is it any wonder that consumers are ignoring fuel efficiency?

That’s the case with the Hyundai Ioniq, a car offered solely as a hybrid, plug-in hybrid and electric vehicle. At a time when 2021 models are arriving in showrooms, Hyundai’s website is still flogging the 2020s. Overlooked by a shortsighted public, with prices starting at $23,200, this attractive five-door hatchback has some incredibly attractive numbers. But those who treasure the fast and furious over the frugal and fuel-efficient will be disappointed when it’s time to mash the throttle. Since this is a hybrid, you can forget about 0-to-60 mph statistics. The numbers that matter come from the EPA: namely, 55 mpg city, 54 mpg highway.

Offered in base Blue model, and climbing through SE, SEL and Limited trims, Hyundai supplied a Limited model for testing.

Sounds great, right? With the pandemic economy wreaking havoc on Americans’ livelihoods, any vehicle that can help rein in expenses is welcome.

Thankfully, despite being a hybrid, the Ioniq’s design is modern without looking like some alien spacecraft, something you can’t say about its main competitor, the Toyota Prius. In fact, the Ioniq looks like a hatchback sibling to the Elantra, although it wears a unique hatchback with a large glass window that waterfalls vertically into the tailgate, not unlike an old Honda CRX. It’s a look that had bystanders doing double takes. No, really, it happened — although I never expected it.

Inside, the decor is definitely commensurate with its $23,200 starting price, even in the $31,200 Ioniq Limited. But the textures are attractive, and many of the materials incorporate recycled or ecologically sensitive materials. The interior door panels are made of plastic, powdered wood and volcanic stone, while the headliner uses raw elements extracted from sugar cane and the eco-friendly paint is made with ingredients extracted from soybean oil.

This car certainly plays the green card well enough, but it also possesses some niceties that make living with it far easier, such as the large touchscreen that anchors the instrument panel. On lower trim levels, it’s framed by shortcut buttons, while Limited models get a full-width 10.3-inch screen, and no buttons. The intuitive user interface is elegantly designed and easy to use. Apple CarPlay and Android Auto are standard, augmented by auxiliary and USB ports. The test car also featured Qi wireless charging.

As you’d expect in a car just 176 inches long, front seat head- and leg-room are generous, although rear seat accommodations are merely adequate. The cargo area is spacious but lacking in height, although it’s more than roomy enough for everyday use, and the cargo cover has its own track, making it easy to operate.

The Ioniq’s heart is in the right place until it comes time to drive, and that’s when the Ioniq’s economy-car personality shines through.

The Ioniq uses an Atkinson Cycle DOHC 16-valve 1.6-liter four-cylinder gas engine and 32-kW electric motor to deliver 139 horsepower to its front wheels through a six-speed dual-clutch automatic transmission. Kudos to Hyundai for passing up the temptation to use a continuously variable automatic transmission, which typically exacerbates any lack of performance. As it is, the Ioniq is slow, and the transmission is reluctant to downshift when asked for more power — typical of economy car gearing. This wouldn’t matter if the car delivered 55 mpg, as the EPA says it does. But one week and nearly 250 miles of driving yielded 40.5 mpg, which is nothing to scoff at, but not nearly as good as expected.

The same could be said of the Ioniq’s handling. Although the car feels stable and composed when puttering along pokey parkways, push it hard, as you might have to in an emergency maneuver, and you’ll reach its handling limits quickly as the body leans and the low rolling resistance tires howl in protest. And there’s a surprising amount of tire and road noise at highway speed. Annoyingly, the windshield suffers from far too many dashboard reflections, making it difficult to see through.

Of course, given that many of our roads are clogged with traffic, horsepower may not matter as much as fuel efficiency. If you’re not in much of a hurry, you’ll find this car a perfect fit. And you’ll be comforted by the Ioniq’s standard forward-collision warning, automated emergency braking, lane-departure warning, lane-keeping assist and optional blind-spot monitoring and rear cross-traffic alert.

For those looking for a car with a bit more soul, not a rolling appliance with collision-avoidance features and a touchscreen, you’d be best advised to look elsewhere in the Hyundai showroom.

However, Hyundai is planning to make Ioniq its electric vehicle sub-brand, expanding it beyond this model to include three more electric vehicles. So this is one story that’s far from finished. And knowing how quickly Hyundai improves with every new model, the forthcoming EVs’ performance should far outshine this one.