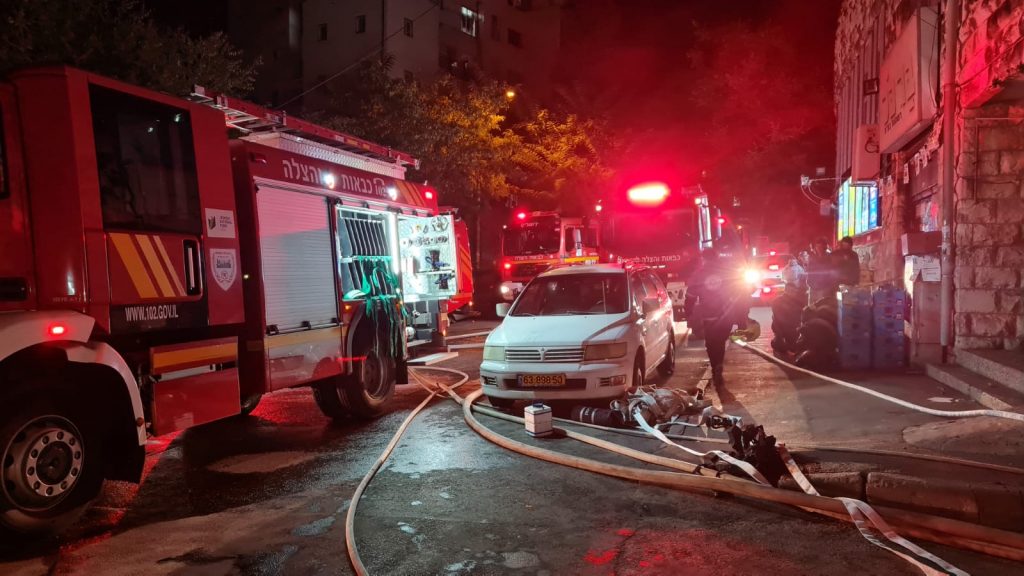 18 fire fighting teams from the Yerushalayim region worked on Tuesday morning to contain and extinguish a large blaze that broke out on the lower floors of a six-building complex on Sorotzkin Street in the Romema neighborhood. The fire broke out at about 4 a.m.

The fire also spread to a number of nearby vehicles, warehouses and residential apartments, trapping dozens of families in their homes due to both the fierce blaze as well as the smoke. Firefighters are working to clear neighboring buildings of smoke, enabling residents to leave their homes, and are ascertaining whether additional people are trapped in the vicinity.

Deputy commander Eli Edri, chief officer of the HaUmah fire station, related: “We have been at the site since around four o’clock in the morning, dealing with a very large and challenging blaze that broke out in a complex of six adjoining buildings on Sorotzkin Street. As a result of the blaze, a large number of people, including young children, have been trapped in their apartments by the fire and also the smoke, which has spread through the building stairwells. In addition, a large number of vehicles have gone up in flames, as well as warehouses. Several apartments have sustained damage.”

He continued: “At this time, we’re working to allow trapped residents to leave their homes, and doing what we can to prevent fire and smoke damage to the buildings involved. This involves the firefighters entering right into the flames and smoke, displaying great courage and bravery.”

Jerusalem Mayor, Moshe Lion, arrived at the scene immediately at first light, and instructed the municipal departments to offer any and every assistance to the firefighters and residents and immediately begin the cleaning and maintenance work on the damaged floors. The work of evacuating the residents is also continuing. City staff are present and working on the site in order to restore routine to the residents.

An investigation into the source of the conflagration is under way.