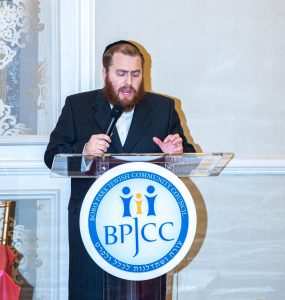 Battered by a punishing lockdown which triggered a trend of online shopping, the storeowners of Boro Park gathered under the auspices of the Boro Park Jewish Community Council on Monday afternoon to strategize on how to claw back shoppers, with “Shop Local” being the simple slogan of the program.

Avi Greenstein, the CEO of the Boro Park Jewish Community Council and emcee of the event, noted that to the best of his recollection, this was the first time the neighborhood’s shopkeepers and business owners were uniting as a sort of chamber of commerce to help each other. He called Shop Local “an emergency response” to an emergency situation which threatened the livelihoods of so many people.

He expressed the hope that in the near future, a formal association can be organized, similar to what Boro Park’s school bus drivers have done several years ago.

“There’s nothing that can compare to when I speak to city officials and say, ‘I speak to these 50 storeowners and here’s what they have to say,’” Rabbi Greenstein told the assembled storeowners. “There are a lot of ideas here that can be done; it’s not for one meeting but this is a good start.”

The proposal was enthusiastically embraced by Yidel Perlstein, the chairman of Community Board 12, a quasi-government agency that lobbies on behalf of the district. “Every time you have an association and you stick together,” he said, “you have a much greater chance of success.” He added, “I’m willing to do whatever it takes.”

Munching on chocolate glazed blintzes, cheese cups and assorted pastries from Platters and Co., the men and women who underpin Boro Park’s economy tossed out ideas, absorbed some suggestions that came in from the public and went home with a swag bag of COVID-19 personal protection equipment to distribute for free in their stores. They also urged the stores to encourage mask wearing and using hand sanitizer indoors.

The noontime event, hosted by the Boro Park JCC, was sponsored by Breadberry, BoroPark24, Eichlers and Toys4You. Its value was underscored by the fact that two weeks have passed since the area left red zone status, allowing it to fully reopen, yet customers are slow to come back.

To combat that threat, people behind the “Shop Local” program will be holding the first in what is hoped to be a series of seminars to retrain proprietors to capture the online spirit. A conference on customer service is scheduled to happen in the next few weeks, Rabbi Greenstein said. He is also planning an ongoing run of newspaper ads and social media videos to promote local shopping. The BPJCC is also working on developing an online directory that people can use to find their local businesses.

Since word first got out about the initiative, hundreds of comments have poured into the BPJCC how stores can improve from the consumers’ perspective. Mr. Perlstein said that Rav Chatzkel Roth allows people to shop local, and use maasar funds to make up the difference in price. Spreading awareness of this psak is one idea suggested. Another is to ask local yeshivos to send letters to their parent bodies to shop local. Some felt that customers don’t feel safe in crowded stores so the BPJCC is offering to sponsor a ready supply of PPE (personal protection equipment) for any store that requests it.

Delivering divrei brachah, Rav Yaakov Gold, the Krula Rav, who also happens to be a successful businessman, gave his blessing to the enterprise. He said that he credits his own success in business on his belief in always working cooperatively with his competitors, hiring people from the community and never shopping online.

“There’s enough parnassah for everyone,” Rav Gold said, “and wherever it has to go it will go.”

Mr. Perlstein, of Community Board 12, fielded questions from the audience. He prefaced his remarks by predicting that most of the questions would probably be about the recent spurt of fines and violations. He had no idea how that will work out but added that many legislators on both the state and city level were working to have them all overturned.

“I’m not aware of anybody who actually had to pay these fines,” Mr. Perlstein said, “but I can say that members of the City Council and State Senate are working very hard to have them thrown out.”

Questions from the audience centered around fears of a second lockdown and suggestions for how to draw back customers. One suggested lobbying lawmakers for a two-week sales tax moratorium. Another challenged fellow storeowners to also shop locally when they seek out suppliers. A third recommended have a uniform return policy across Boro Park and having it displayed in a prominent place, such as near the register.

“People do not realize how important a business is to a community, what services they provide,” Rabbi Greenstein said in his closing remarks. “People have to realize what’s at stake here. Each and every one of us have to know how vital it is to have stores that are thriving. It’s a new day in Boro Park. We’re not going to let local stores suffer on their own anymore.” 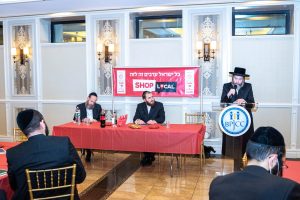 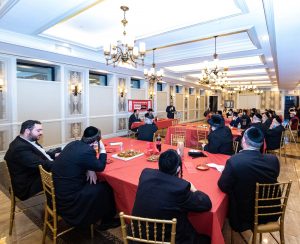