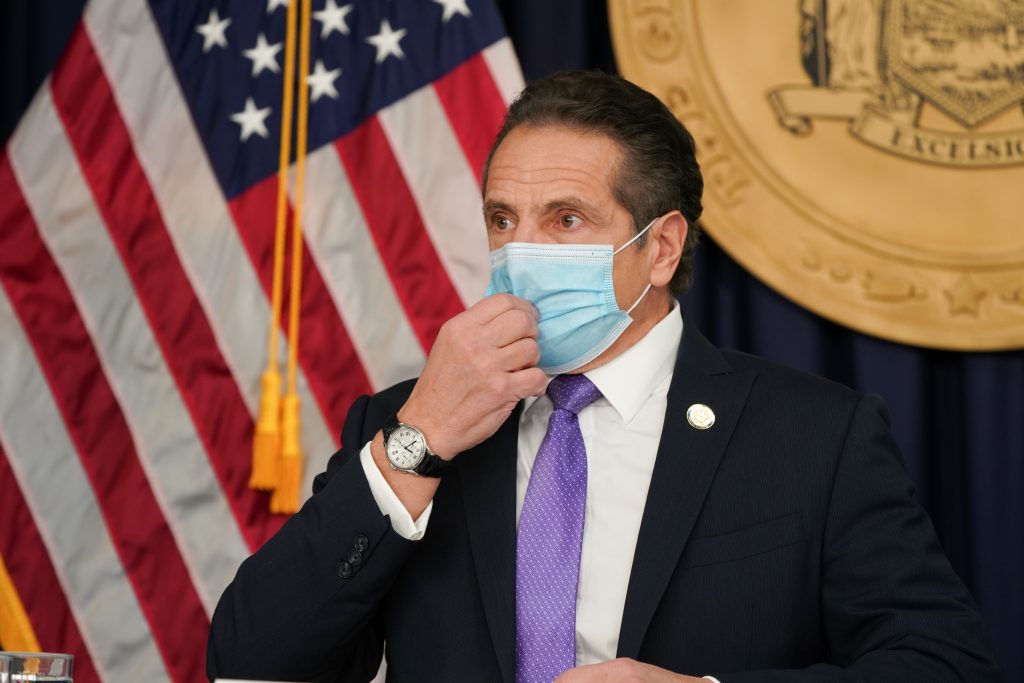 New York Gov. Andrew Cuomo said he is reopening an emergency COVID-19 field hospital on Staten Island as the number of infections keep climbing, the first such facility in the state to relaunch since the state partly tamed the pandemic over the summer. Portions of Staten Island and other parts of the state were designated as yellow or orange zones on Monday.

The temporary hospital on the grounds of the South Beach Psychiatric Hospital cared for 200 patients in spring, when New York City’s hospital wards were overwhelmed with seriously ill and dying coronavirus patients.

Now, Cuomo said officials are concerned it might be needed again, as the virus has spread in the borough at a faster rate than in the rest of the city. Staten Island has averaged 209 new cases of COVID-19 per day over the past seven days — up 86% from two weeks ago.

“The hospitals have contacted us and they say they need emergency beds on Staten Island,” Cuomo told reporters at a briefing at his Manhattan office Monday. “Remember when we had to set up field hospitals, emergency hospitals for additional capacity? Well, that’s what we have to do on Staten Island.”

Staten Island University Hospital’s north campus reported 88 COVID-19 patients as of Saturday, taking up about one-fifth of the hospital’s 472 beds, according to state data. That’s more than triple the number it had on Nov. 1.

The governor, a Democrat, also designated the southern half of Staten Island as an “orange zone” under his COVID Action Initiative, first enacted early last month. In orange zones, services at houses of worship are limited to the lesser of 33% of maximum capacity or 25 people; certain high-risk businesses are closed, including gyms, salons and barber shops; and indoor restaurant dining is banned, and even outdoor dining is banned after 10 p.m.; and schools may be open only if they enact a significant testing protocol.

New yellow zones – which require schools to test 20% of students every week – were also created in Manhattan’s Washington Heights neighborhood, and parts of Long Island: in and around Great Neck and Massapequa Park in Nassau County, and parts of Suffolk County including Hampton Bays and Riverhead.

(No parts of the state are currently in the most-restrictive red zones. A full listing of restrictions in each colored zone is available here.)

Cuomo said he is worried that news of vaccines passing clinical trials could give people a false sense of security about the need to still follow social distancing and mask rules during the holiday season.

“The vaccination is not going to be here in time to stop an increasing infection rate,” he said.

A spokesperson for Richmond University Medical Center, a roughly 470-bed hospital on Staten Island, said the caseload there of around 19 coronavirus patients is manageable for now. That’s up somewhat from the single-digit numbers that persisted throughout September and most of October, but nowhere near the 210 who were there at the high point in early April, Alex Lutz said.

“The hope is that, while the numbers are expected to increase, it will be a gradual increase, which would be much more manageable than it was in the spring,” Lutz said, with clinicians and staffers able to draw on treatments and other knowledge that’s built up since the initial surge.

Hospitals and nursing homes have reported at least 665 COVID-19 deaths in the state over the past 30 days — more than in July, August and September combined.

Over the past seven days, the COVID-19 test positivity rate across New York was 2.93%. Though that number is far lower than most states’ percent-positivity rate, it reflects a rise in cases during the fall, amid a feared “second wave” of the virus. During the summer, the state at one point went more than a month with the daily positivity rate below 1%.