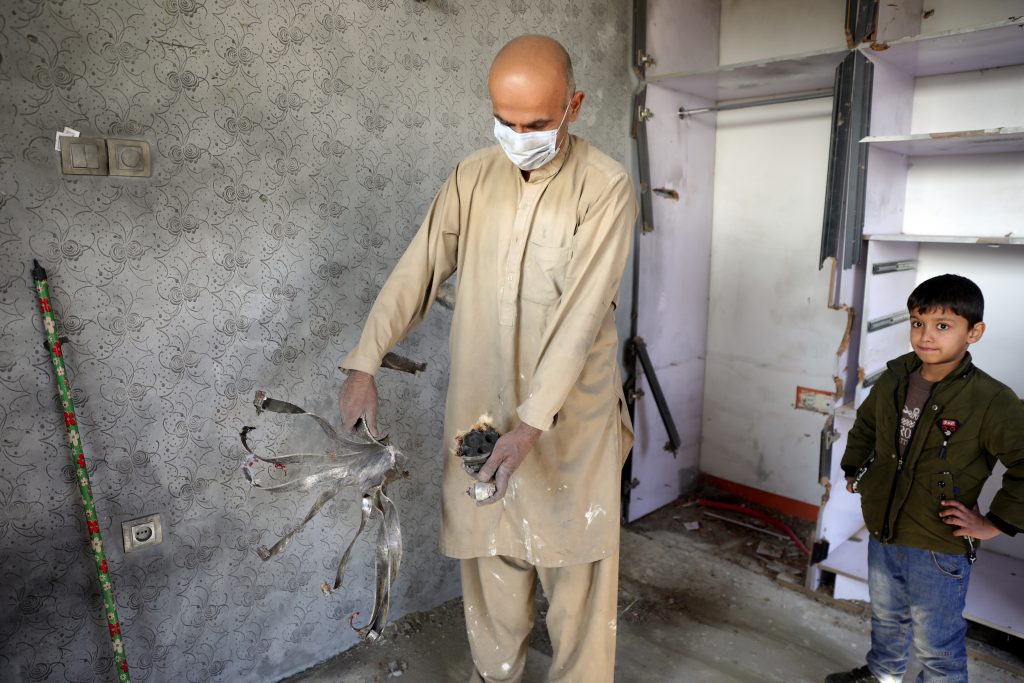 Mortars slammed into a residential area of the Afghan capital, killing eight people Saturday, hours before outgoing U.S. Secretary of State Mike Pompeo held what may be his last meetings with the Taliban and Afghan government negotiators trying to hammer out a peace deal.

The attack in Kabul, which was blamed on Islamic State terrorists, also injured 31 people.

The assault came as peace talks were underway in Qatar, where Pompeo told Afghan government negotiators that the U.S. will “sit on the side and help where we can” in the negotiations with Taliban terrorists.

Two Taliban officials told The Associated Press that the two warring sides have found common ground on which to move forward the stalled talks.

In Kabul, at least one of the 23 mortar shells fired from two cars hit inside the Iranian Embassy compound. No one was injured, but it damaged the main building, the Iranian Embassy said in a tweet. At least 31 people were hurt elsewhere in the city, according to the Afghan Interior Ministry.

The local Islamic State affiliate issued a statement claiming the attack that targeted the so-called Green Zone in Kabul which houses foreign embassies, the presidential palace and Afghan military compounds, according to SITE Intelligence Group.

In Doha, Pompeo also met with the co-founder of the Taliban, Mullah Abdul Ghani Baradar, who signed the peace agreement with Washington in February ahead of the so-called intra-Afghan talks. The insurgent group’s spokesman, Mohammad Naeem, tweeted that further prisoner releases were discussed in the meeting, in addition to those that the two warring sides committed to ahead of peace talks under the U.S. deal.

For most Afghans, the overriding concern has been a sharp rise in violence this year and a surge of attacks by the Taliban against Afghanistan’s beleaguered security forces, since the start of peace talks in September.

The announcement this week that the United States will accelerate its planned troop withdrawal has lent greater urgency to the intra-Afghan negotiations and to the calls for a reduction in violence. Washington announced it would withdraw another estimated 2,500 troops before the middle of January, leaving about 2,000 American soldiers in Afghanistan.

The Taliban have, however, held to their promise not to attack U.S. and NATO troops.

The United States has been pressing in recent weeks for a reduction in violence, while the Afghan government has been demanding a ceasefire. The Taliban have refused, saying a ceasefire will be part of negotiations.

There are many within the Afghan government who want February’s peace deal scrapped. President-elect Joe Biden has previously advocated a small, intelligence-based force in Afghanistan to focus on counterterrorism.

Meanwhile, Abdullah Abdullah, head of the government’s High Council for Reconciliation, condemned in a tweet Saturday’s attack on the capital, calling it a “cowardly” act. The council oversees the government’s negotiating team at the table with the Taliban in Doha.

Pakistan, whose Prime Minister Imran Khan visited on Tuesday Kabul for the first time since he came to office, condemned the attack and warned “it is important to be vigilant against the spoilers who are working to undermine the peace efforts.” He did not identify “the spoilers.”

Hours before the attack rattled Kabul, a bomb attached to a car killed one security personnel and wounded three others in an eastern neighborhood of the capital, said Kabul police spokesman Ferdaws Faramarz.

Violence in Afghanistan has spiked in recent months with increasingly horrific attacks often claimed by the Islamic State group affiliate.