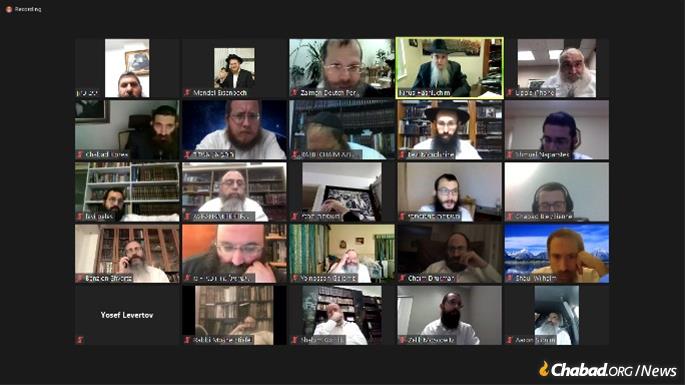 It was a Zoom call that was only supposed to last one day, yet as it nears three days of continuous conversation and celebration, it still shows no sign of ending any time soon.

In May, a popular New Zealand radio show attempted to host the world’s longest Zoom, clocking in at 23 hours and 39 minutes. By now, as it enters its third day, the International Conference of Chabad-Lubavitch Emissaries’s global Zoom melaveh malka farbrengen gathering has long surpassed that.

The Zoom call, taking the place of the regular melaveh malkah farbrengen gathering that takes place at the outset of Shabbat in New York on any other year, began after Shabbat ended at 9:30 p.m. in Melbourne, Australia, and continued with Chabad-Lubavitch emissaries tuning in to speakers from Melbourne, Bangkok, Moscow, Jerusalem, Johannesburg, Paris, London, S. Paulo, Brooklyn, Los Angeles and Anchorage, culminating with the end of Shabbat in Hawaii, when the Chabad emissary in Honolulu was finally able to log on some 24 hours later.

The conversation morphed from English to Hebrew and Yiddish then back to English—peppered throughout with Russian, French, Spanish and Portuguese—and with anywhere between 200 to 1,000 rabbis on it at any given moment, but the goal–to strengthen Jewish life wherever they maybe—remains the same.

It lasted more than 60 hours … and is still ongoing.