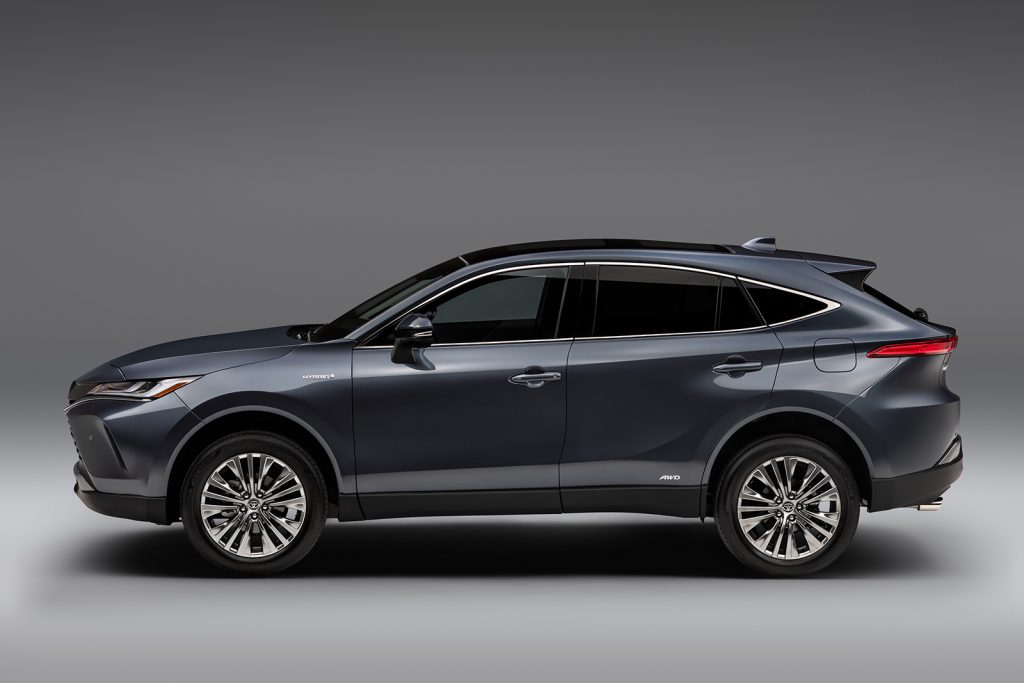 The Venza, the crossover produced by Toyota from 2008 through 2015, was never the success that company officials expected. So you have to wonder why Toyota is reviving that moniker for its first two-row crossover SUV sold solely with a gas-electric hybrid driveline and all-wheel drive, rather than using another old name.

No matter what you call it, the Venza, sold in ascending LE, XLE and Limited trim, is longer and slightly lower than the RAV4, and has a far more refined and sophisticated demeanor. Walking around it, the Venza’s side sculpting is particularly well done, starting as a soft shoulder and sharpening into a crease that wraps around back where it anchors the rear window. At the same time, the side windows’ teardrop shape comes to a point, accentuating the sloping rear pillar that offsets the vehicle’s square shape. It’s a masterful bit of shaping that’s clearly softer and far superior to the previous Venza, which is best described as dowdy. Certainly, it’s more inviting than the RAV4, which wears aggressively chiseled sheetmetal that’s meant to lure off-roaders, and those with Y-chromosomes.

The RAV4 comparisons are apt, since the Venza employs the RAV4 Hybrid’s powertrain: a 2.5-liter double-overhead-cam four-cylinder engine paired with three electric motors to produce 219 horsepower. However, the Venza uses a lithium-ion battery pack rather than the RAV4’s nickel-metal hydride battery pack to improve performance. And while the Venza also has selectable normal, eco and sport driving modes, it lacks the RAV4’s off-road modes. This is more the foul-weather friend than backwoods warrior.

Then again, given that the Limited-trim test vehicle tipped the scales at more than 3,900 pounds, 219 horses seems meager. Yet the driveline’s electric motors boost low-speed torque, making low-speed acceleration seem sprightly, more so than a sprint to 60 mph. Clearly, the Venza is an ideal around-town, cul-de-sac cruiser.

It’s a feeling amplified by its quiet, comfortable and fuss-free ride and handling. Bumps and rough stuff are absorbed and dispatched quickly, with little excess body rebound. There is body lean in corners, and the low rolling resistance tires howl in protest at anything beyond modest cornering. Brakes are light in feel, and take time to engage, but the energy they generate is captured to recharge the battery.

The Venza’s all-wheel-drive system operates in front-wheel drive until slip is detected. Then, up to 80 percent of its power can be channeled to the rear wheels if needed. Toyota’s Star Safety System is standard and includes vehicle stability control, traction control, electronic brake-force distribution, brake assist, anti-lock braking system and automatic stop/start.

The RAV4’s driving position is comfortable and roomy. An unusually large full-color head-up display, optional on the Limited, projects speed and other information onto the windshield in front of the driver. The cabin feels sufficiently roomy; passengers should have more than enough space. Certainly their stuff will. The cargo area goes well forward and is nicely finished, even though it lacks grocery-bag hooks. However, it’s shallow in height and has a high liftover. The cabin remains somewhat quiet, although there is a noticeable amount of road and tire noise at highway speed.

But the interior is a clear step above the RAV4, with a premium bearing and a cabin awash in soft-touch pleather and shiny plastic finishes. An 8-inch infotainment screen is standard, although a larger 12.3-inch unit is optional on the XLE and standard on the Limited. It also houses the climate control’s flat capacitive buttons that prove hard to use without taking your eyes off the road. But the system is easy to understand thanks to the large screen size. I just wish its interface weren’t so extraordinarily overdesigned. There are four USB ports, and a Qi wireless charging pad. Amazon Alexa, Android Auto and Apple CarPlay compatibility is standard. The test vehicle came with the JBL sound system, which proved to be especially impressive in its sound, lending songs a three-dimensional feel.

The truly unique feature, one which proves to be a delightful frill, is the optional Star Gaze fixed glass roof. At the touch of a button, it switches to transparent from opaque, a feature first seen on Mercedes-Benz models. Neat stuff.

But it’s important to remember that the Venza isn’t meant to be sporty. It’s not an off-road warrior. It’s not a specialist. It’s a pleasing, good-looking, well-rounded mainstream SUV with abilities you’ll appreciate every day, like all-wheel drive, an EPA rating of 40 mpg in city driving, and enough cargo space to carry most of life’s stuff.